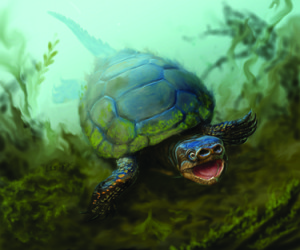 In the 250-million-year known history of turtles, scientists have never seen anything like the pig nose of a species of extinct turtle newly discovered in Grand Staircase-Escalante National Monument by a team from the Natural History Museum of Utah.

“It’s one of the weirdest turtles that ever lived,” says Joshua Lively MS’13, who described the new species in the Journal of Vertebrate Paleontology. Lively studied the fossil as part of his master’s thesis at the University of Utah. He is now a doctoral student at the University of Texas at Austin.

The extinct turtle, Arvinachelys golden (or Golden’s bacon turtle), was about two feet long from head to tail and had a broad snout with two bony nasal openings. All other known turtles have just one external nasal opening in their skulls; the division between their nostrils is only fleshy. When it was alive, 76 million years ago during the Cretaceous Period, Southern Utah looked more like present-day Louisiana. The climate was wet and hot, and the landscape was dominated by rivers, bayous, and lowland flood plains. The turtle lived alongside tyrannosaurs, armored ankylosaurs, giant duck-billed dinosaurs, and other dinosaurs that left abundant fossil remains in the Upper Cretaceous Kaiparowits Formation of Southern Utah. But the vast majority of the many remains of crocodilians, turtles, lizards, and amphibians found in those fossil beds don’t look much different from their modern relatives.

The pig-nosed turtle’s scientific name, Arvinachelys goldeni, derives from arvina, a Latin word for pig fat or bacon, and chelys, Latin for tortoise. And goldeni honors Jerry Golden, a volunteer fossil preparator at the Natural History Museum of Utah, who prepared the new holotype specimen—and many others in the museum’s collections.

“Volunteers are involved in every aspect of what we do, from field work and digging up specimens to preparing them,” says Randall Irmis, curator of paleontology at the museum and associate professor at the University of Utah. “In 2014, volunteers provided 14,500 hours of work. It’s a massive contribution. We couldn’t do what we do without them. We really consider them key team members.”

Most ancient turtle species are represented by fossil remains that often consist of nothing more than an isolated skull or shell. And, finds that associate skulls with shells are rare. The new specimen includes not only the skull and the shell, but also a nearly complete forelimb, partial hindlimbs, and vertebrae from the neck and tail.

Read more about Utah, the U, and the Natural History Museum’s incredible roles in dinosaur fossil finds in the Continuum feature here.

Light-Emitting Diodes: From Bread to Bulbs 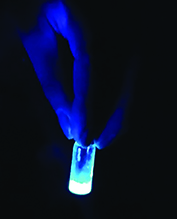 The luminescence of carbon dots when irradiated with UV light. (Photo by Prashant Sarswat)

TVs, Christmas lights, and flashlights of the future could be lit up using our leftover bread crusts. That’s the finding of two University of Utah researchers searching for a more sustainable and less expensive way to make light-emitting diodes (LEDs).

LEDs have been a popular, more efficient alternative to fluorescent and incandescent bulbs for the past few decades. But LEDs are generally produced using quantum dots (QDs), tiny crystals that have luminescent properties. And many of these QDs are expensive to synthesize, as well as potentially harmful to dispose of. So some research over the past 10 years has focused on using carbon dots (CDs, or simply, QDs made of carbon) to create LEDs. Compared to other types of quantum dots, CDs have not only lower toxicity but also better biocompatibility, meaning they can be used in a broader variety of applications.

U Metallurgical Engineering Research Assistant Professor Prashant Sarswat and Professor Michael Free have now successfully turned food waste such as soft drinks and discarded pieces of bread and tortillas into CDs, and subsequently, LEDs. They found sucrose and D-fructose dissolved in soft drinks to be the most effective sources for production of CDs. Currently, one of the most common sources of QDs is cadmium selenide, a compound composed of two toxic elements, leading to concerns over toxic waste. Using food waste could not only be nontoxic but actually reduce the waste stream.

Free and Sarswat’s results were recently published in Physical Chemistry Chemical Physics, a journal of the Royal Society of Chemistry. Looking forward, the researchers hope to continue studying the LEDs produced from food waste for stability and long-term performance.

Learn more about Sarswat and Free’s other research in the previous Discovery item here. 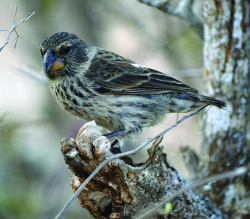 The finches that helped inspire Charles Darwin’s theory of evolution are in danger of going extinct, according to a new study from the University of Utah. But the U researchers also propose a solution.

Darwin’s finches in the Galapagos Islands are being threatened by a parasitic fly that attacks their young. The new study “shows that the fly has the potential to drive populations of the most common species of Darwin’s finch to extinction in several decades,” says biology professor Dale Clayton, senior author of the study published in the Journal of Applied Ecology. But he adds, “Our mathematical model also shows that a modest reduction in the prevalence of the fly—through human intervention and management—would alleviate the extinction risk.”

Several approaches may be needed, such as introducing fly-parasitizing wasps, removing chicks from nests for hand-rearing, and using insecticides, including placing pesticide- treated cotton balls where birds can collect them to self-fumigate their nests.

“Darwin’s finches are one of the best examples we have of speciation,” says the new study’s first author, Jennifer Koop PhD’11, who did the research as a U doctoral student and now is an assistant professor of biology at the University of Massachusetts, Dartmouth. The finches live only in the Galapagos Islands, off the coast of mainland Ecuador, and started evolving into separate species some 3 million to 5 million years ago. One of them, the mangrove finch, already “is facing potential total extinction because it is present in only two populations on a single island, Isabela,” Koop says. The nest fly arrived in the Galapagos Islands in the 1960s. They first were documented in bird nests there in 1997. The new study is based on five years of data collected by Koop, Clayton, and colleagues.

Read about Clayton’s research into self-fumigation of nests here. 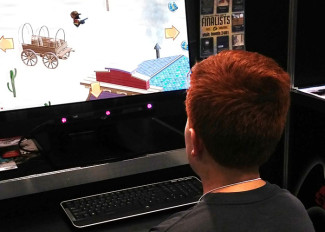 Working with researchers at the University of Utah’s John A. Moran Eye Center, a student team from the U created the game HealthX to help diagnose and treat lazy eye, which can lead to permanent visual impairment if left untreated. Fully controlled by eye movement, the game forces a child’s lazy eye to move around the screen, which can strengthen and help find the right balance between the eyes.

HealthX won Best Student Game in the Serious Games Showcase & Challenge in Orlando, Florida, in December, marking the second year in a row that student video game developers from the U’s Entertainment Arts & Engineering (EAE) have won the honor.

“Lazy eye is one of the most common eye disorders found in children,” says Ahmad Alsaleem, a graduate student in game engineering and co-researcher on HealthX with game production graduate students Eric Allen and Daniel Blair BA’14. “Despite its prevalence, clinical treatments and current diagnostic tools are not designed with the child’s nature in mind. As researchers in the gaming field, we are working to ‘gamify’ current medical procedures. Our solution provides an engaging experience, continuous feedback, and a cost-effective, automated tool for treating and diagnosing lazy eye.”

HealthX is a collection of eye-controlled games that require the players to constantly move their eyes across the screen at varied time intervals. This movement trains the eyes to work together. HealthX is now in clinical trials with selected patients at the Moran Eye Center, and the student developers hope the game will be available by the end of 2016.

In Orlando, the students were awarded software packages valued at $13,000 provided by Autodesk. The game also garnered a second-place prize of $2,500 in the Utah Game Wars in September.

Read more about the U’s EAE program in the Continuum feature Game On here.

Finding the Roots of Disease in DNA 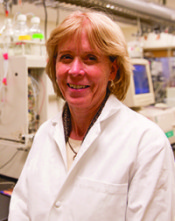 University of Utah chemists have devised a new way to detect damage to DNA that can lead to genetic mutations responsible for many diseases, including various cancers and neurological disorders.

“We’re one step closer to understanding the underlying chemistry that leads to genetic diseases,” says Cynthia Burrows, Distinguished Professor and chair of chemistry at the university and senior author of the new study published in the online journal Nature Communications.

Jan Riedl, a recent U postdoctoral fellow and the study’s first author, says 99 percent of DNA lesions are repaired naturally. The rest can accumulate over time and can lead to mutations responsible for age-related diseases including colon, breast, liver, lung, and melanoma skin cancers; clogged arteries; and neurological ailments such as Huntington’s disease and Lou Gehrig’s disease.

“A method capable of identifying the chemical identity and location in which lesions appear is crucial for determining the molecular etiology [cause] of these diseases,” Burrows and colleagues write. The research was funded by the National Institutes of Health. Burrows and Riedl conducted the study with U chemists Aaron Fleming PhD’09, a research assistant professor, and Yun Ding PhD’15, a postdoctoral researcher.