Stop Cervical Cancer Before it Starts 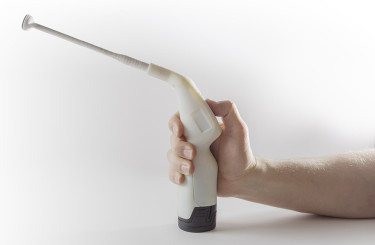 Cervical cancer is almost eradicated in the developed world, where detection is made quickly and treatments are readily available. But in the developing world, where doctors and equipment are scarce, many more women die of the disease—as many as 90 percent of the 250,000 women who die of it annually worldwide. A cross-disciplinary team of University of Utah students hopes to solve this problem with a new handheld treatment device, Cinluma. The team just became the World Health Organization lead for cervical cancer and received a new $2.4 million grant from the National Cancer Institute.

“Cervical cancer stays precancerous for 10–20 years, but once it becomes cancer, it becomes very aggressive and few survive,” says Tim Pickett MS’15 (bioengineering), one of the students on the team. “Because of the ‘grace period,’ it’s basically curable in the developed world.”

Cinluma, which looks much like an ordinary battery-powered drill with a heating element on the end, applies heat to the cervix and, in just 45 seconds, eliminates lesions before they can become cancer. Unlike other treatments on the market, the device is inexpensive, reusable, and battery-powered, so doctors don’t need a stable source of electricity.

“The University of Utah is a global leader in medical innovation, and we are proud to carry on this tradition,” says team mentor John Langell MBA’13, a surgeon, assistant professor in the U School of Medicine, and director of the Center for Medical Innovation. “What is most impressive is the foundation for technology acceleration we have created at the U. Through resources like the Crocker Innovation and Design Lab, where Cinluma was conceived and created, we took this technology from concept to full FDA filing in just seven months, something unheard of even at the largest international medical technology companies.”

Others on the Cinluma team include Kristopher Loken MBA’15 MS’15 (bioengineering); surgical residents Jennwood Chen and Sarah Lombardo; multidisciplinary design student Brian Charlesworth; and medical students Ashley Trane BS’10 and Ashley Langell BS’11, daughter of mentor John. “I learned about bioinnovation through my father before ever starting medical school and used to attend the B2B competitions to see what new projects students were coming up with,” Ashley notes. “Once I got into med school, I became involved myself, and it just seemed natural to have my dad as one of my team mentors.” Other team mentors included Dean Wallace MD’87 PhD’82, a doctor and entrepreneur who first identified the need to find a better treatment for cervical cancer in developing countries.

Cinluma is now managed by Wallace’s company, Cure Medical, and clinical studies on the device will soon begin at the U. The company has made a request to the U.S. Food and Drug Administration for permission to sell the device and has filed for a U.S. patent on the device’s portability. It is also working on the same protection in the European Union. 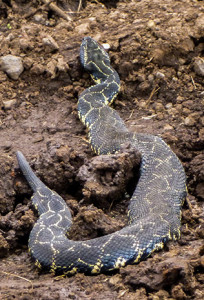 U biology doctoral student Evan Buechley and colleagues have helped discover a new species of snake inside Ethiopia’s Bale Mountains National Park. The new viper species is called Bitis harenna after the Harenna Forest in Bale Mountains where Buechley first photographed the black-colored snake with pale-yellowish markings. The journal Zootaxa recently published a study on the team’s findings. 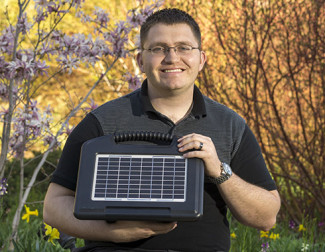 After three years and four prototypes, student start-up SenseTech and its creator Jacob Harris won $5,000 and first place in the 2016 University of Utah Opportunity Quest (OQ) business-plan competition in February.

SenseTech records soil, air, temperature, and moisture data through six solarpowered sensors, then sends the information to a user’s smartphone or computer to help guide optimal watering. By providing information on exactly when, where, and how much to water, the start-up has the potential to vastly improve water usage at golf courses, city parks, farms, and even by agencies such as the U.S. Geological Service.

“The broad plan with this money is to grow SenseTech and make a bigger difference in the world,” says Harris, who grew up in a farming community in rural northern Utah. “I will use this money to further develop our backend analytics database, as well as expand our beta-testing program.” Harris is currently pursuing both an MBA and a master’s in mechanical engineering at the U.

As the grand prize winner at OQ, Harris garnered a $5,000 grant from Zions Bank, $2,000 of in-kind prizes, and connections and pitch consulting opportunities with industry professionals who judged the competition. SenseTech competed against other student companies such as Aura Optics, the second-place start-up (which creates customizable high-performance snow goggles with interchangeable lenses and straps), and Peke-Buo, the third-place company that created a unique, clutch-style kit to streamline changing diapers. 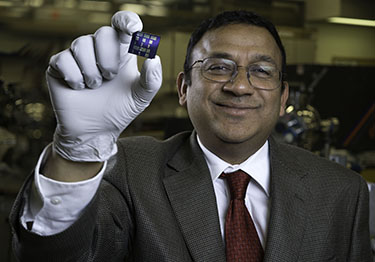 University of Utah engineers have discovered a new kind of 2D semiconducting material for electronics that opens the door for much speedier computers and smartphones that also consume a lot less power.

The semiconductor, made of the elements tin and oxygen, is a layer of 2D material only one atom thick, allowing electrical charges to move through it much faster than conventional 3D materials such as silicon. Transistors made with this material could lead to computers, processors, and smartphones that are more than 100 times faster than regular devices.

The material was discovered by a team led by Ashutosh Tiwari, a U materials science and engineering associate professor. A paper describing the research was the cover story in February in the journal Advanced Electronic Materials. The paper was co-authored by U materials science and engineering doctoral students K. J. Saji and Kun Tian, and Michael Snure BS’04 PhD’09, a former doctoral student of Tiwari now with the Wright-Patterson Air Force Research Lab near Dayton, Ohio. Tiwari’s team has recently started a collaborative research program with the lab.

While researchers in this field have recently discovered other new types of 2D material, these materials allow only the movement of N-type, or negative, electrons. To create an electronic device, the material must allow the movement of both negative electrons and positive charges known as “holes.” The tin monoxide material discovered by Tiwari and his team is the first stable P-type 2D semiconductor material ever in existence.