Cyberattacks: The Next Wave

The next generation of cyberattacks will be more sophisticated, more difficult to detect, and more capable of wreaking untold damage on the nation’s computer systems.

So the U.S. Department of Defense has given a $3 million grant to a team of computer scientists from the University of Utah and University of California, Irvine, to develop software that can hunt down a new kind of vulnerability that is nearly impossible to find with today’s technology.

The team is tasked with creating an analyzer that can thwart so-called algorithmic attacks that target the set of rules or calculations that a computer must follow to solve a problem. Algorithmic attacks are so new and sophisticated that only hackers hired by nation states are likely to have the resources necessary to mount them, but perhaps not for long.

“The military is looking ahead at what’s coming in terms of cybersecurity, and it looks like they’re going to be algorithmic attacks,” says Matt Might, associate professor of computer science at the University of Utah and a co-leader on the team.

“Right now, the doors to the house are unlocked, so there’s no point getting a ladder and scaling up to an unlocked window on the roof,” Might says of the current state of computer security. “But once all the doors get locked on the ground level, attackers are going to start buying ladders. That’s what this next generation of vulnerabilities is all about.”

Algorithmic attacks don’t rely on conventional programming vulnerabilities. They can, for instance, secretly monitor how an algorithm is running or track how much energy a computer is using and use that information to glean secret data that the computer is processing. Algorithmic attacks can also disable a computer by forcing it to use too much memory or driving its central processing unit to overwork.

“These algorithmic attacks are particularly devious because they exploit weaknesses in how resources like time and space are used in the algorithm,” says Suresh Venkatasubramanian, U associate professor of computer science and team co-leader.

The team will be developing software that can perform an audit of computer programs to detect algorithmic vulnerabilities or “hot spots” in the code. This analyzer will perform a mathematical simulation of the software to predict what will happen in the event of an attack.

“Think of it as a spellcheck but for cyber-security,” Might says.

U Partners with Britain’s 100,000 Genomes Project

Genomics England (a company owned by the UK Department of Health) is using technology co-developed in a partnership between the University of Utah and Omicia to interpret the DNA of Britons as part of the 100,000 Genomes Project, a national effort to hasten creation of diagnostics and treatments that are tailored to a person’s genetic makeup. Two core components of the Omicia Opal platform, which transforms genomic data into clinically relevant information, were developed by Mark Yandell, professor of human genetics at the University of Utah and co-director of the USTAR Center for Genetic Discovery: the Variant Annotation, Analysis and Search Tool (VAAST) and Phenotype Driven Variant Ontological Re-ranking tool (Phevor) algorithms. 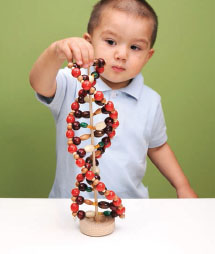 Published in 2011, VAAST has become a benchmark in genome analysis and is already in use at more than 300 locations throughout the world. VAAST is best recognized for discovering a genetic variation that leads to Ogden syndrome, one of the first disease genes found through genome sequencing. A newer algorithm, Phevor, has been used in conjunction with VAAST to identify disease-causing genes found in a single patient or in a small family of two or three, the most common clinical situation for undiagnosed and rare diseases.

“What we want to be able to do is help the kid who is born with a hard-to-diagnose genetic disorder,” says Yandell. “Our genome interpretation tools will be able to identify that disorder and guide treatment.”

Meanwhile, a Warning: Genetic Testing in Kids is Complicated

Today, there are more than 30 companies that offer direct to consumer (DTC) DNA testing, and it is now possible to sequence someone’s entire genetic code for the price of a laptop. But acquiring genetic information is not without consequences, particularly when it comes to children. And the American Society of Human Genetics (ASHG) says that should give us pause.

The ASHG Workgroup on Pediatric Genetic and Genomic Testing has now issued guidelines for genetic testing in children and adolescents that are based on a thorough review of studies on ethical, legal, and social implications. The recommendations were published in The American Journal of Human Genetics.

Bioethicists agree that genetic testing in children is nearly always warranted when the results could have an immediate impact on health care decisions. For example, if searching for the cause of a serious illness, or if a child is at imminent risk for developing a disease such as childhood cancer.

It is predictive testing—looking for genetic signs of health conditions that typically arise during adulthood—that is particularly fraught with complication. The vast majority of genetic tests don’t outright predict someone’s health future. Sometimes the disease never develops, even if it’s against the odds.

“Physicians and bioethicists have been concerned that this powerfully predictive information could stigmatize the child,” says bioethicist Jeffrey Botkin, chair of the workgroup and director of the Utah Center for Excellence in ELSI Research at the University of Utah School of Medicine. While parents might want only the best for their baby daughter, for example, he notes, “A genetic prediction might create a dark cloud that changes how the family and others think about the prospects of that young girl for [not only] health, but also for a career and marriage.”

Based on considerations like these, ASHG recommends holding off on this type of predictive testing in children and letting them make decisions for themselves as adults.