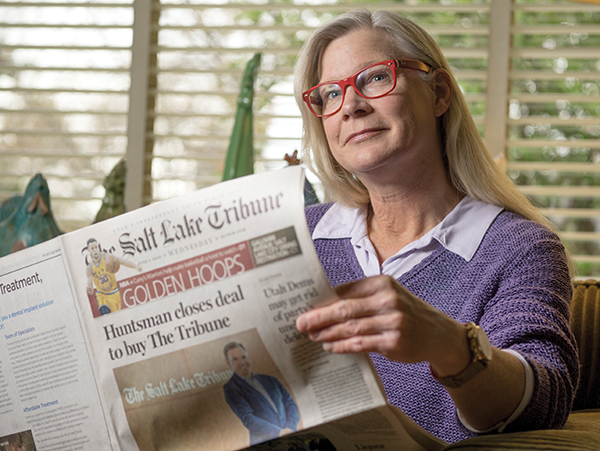 hances are that if you studied at the University of Utah, at least once in your student career you picked up a copy of Utah’s largest newspaper, The Salt Lake Tribune, to catch up on the daily news. Like other papers across the country, the Tribune in recent years has suffered from a shrinking circulation and a rocky transition adapting to a digital age, resulting in fewer resources and a smaller staff.

But about four years ago, The Tribune was dealt a particularly challenging hand: the newspaper’s New York-based hedge fund owners sold half of the paper’s future revenue to its competitor, The Deseret News, for a significant quick profit. The business arrangement forced The Trib to further cut employees and even more resources—a pattern that seemed dangerously set to repeat itself if a new agreement wasn’t reached.

The scenario alarmed Joan O’Brien JD’03, a former Tribune reporter and editor, who left the news business after a successful journalism career to attend the S.J. Quinney College of Law. She and a group of Tribune supporters formed a nonprofit—Citizens for Two Voices—to fundraise and create a legal team to reverse the business decision that had left the Trib in a perilous position. The group later filed a federal lawsuit to fight for the Tribune’s future. At the heart of the issue was the Newspaper Preservation Act, a federal law that provides an antitrust exemption to competing daily newspapers, so communities can essentially benefit from having a multitude of news voices reporting.

After a lengthy legal saga, The Trib was sold last year to Utah philanthropist and businessman Paul Huntsman, a move categorized by many as positive for The Tribune’s future. O’Brien and other supporters dropped their federal lawsuit and have been credited with playing a significant role in keeping the newspaper alive.

“Several years ago, I wrote a letter of recommendation for a Salt Lake Tribune staffer applying for admission to the University of Utah law school. One of my lines was: Journalism’s loss will be the law’s gain. That reporter was Joan O’Brien, and now, 16 years later, I must amend that sentiment,” former Tribune editor Terry Orme wrote in a June 2016 column praising O’Brien’s legal efforts on behalf of the newspaper. “During the past three years, O’Brien has deployed her legal expertise in the service of journalism, more specifically in her selfless, tireless, and sometimes thankless campaign to save The Salt Lake Tribune, and keep it as Utah’s informational watchdog and investigative beacon.”

O’Brien’s love for the newspaper runs deep. “It’s a family affair,” explains O’Brien, whose father was the Tribune’s publisher in the 1980s. After the deals closed for the paper to be purchased by Huntsman, a Tribune reporter tweeted about how he’d be mowing lawns if it weren’t for O’Brien’s efforts. And now, one year since its new lease on life, The Trib continues to serve the Utah community—and just this spring, received a Pulitzer Prize for Local Reporting (for a series on campus sexual assault issues in Utah), a remarkable reward after its potentially close call.

“Through legal wrangling, and at times sheer willpower, Joan helped ensure that The Tribune’s difficult financial position remained in the public eye,” says Jennifer Napier-Pearce BA’91, the paper’s editor. “I can safely say the entire newsroom salutes her persistence and undying support for this vital community institution.”

—Melinda Rogers is a communications manager at the S.J. Quinney College of Law.