On September 21, the University of Utah dedicated the Donna Garff Marriott Honors Residential Scholars Community, the newest solution to the U’s growing need for on-campus housing. The dorm provides apartment-style living to 309 honors students in all years of the program. 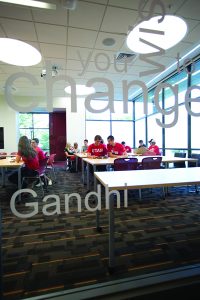 “These are not old-fashioned dorm rooms,” says Sylvia Torti PhD’98, dean of the Honors College. “The buildings were designed to create a seamless living and learning environment under one roof. Student apartments, classrooms, faculty offices, a library, easy transportation access—even a market—all in one place draw together the traditionally segmented components of campus life. Importantly, the dynamic atmosphere created here could become the new model for an engaged student experience throughout the U.”

The complex is located on the eastern side of campus, adjacent to a TRAX light rail station, and a short walk to the Honors Center in Fort Douglas, the University Health Sciences Center, USTAR building, sports facilities, and the future Student Life Center.

The building also incorporates classroom and collaborative workspaces that host the honors learning model. That model is based on small, intensive courses, led by a team of distinguished faculty across disciplines, and often with involvement by non-academic experts from the local community.

The living quarters are four- or eight-person apartments, which appeal to new students and particularly upperclassmen, who typically gravitate to apartment living as they get older. 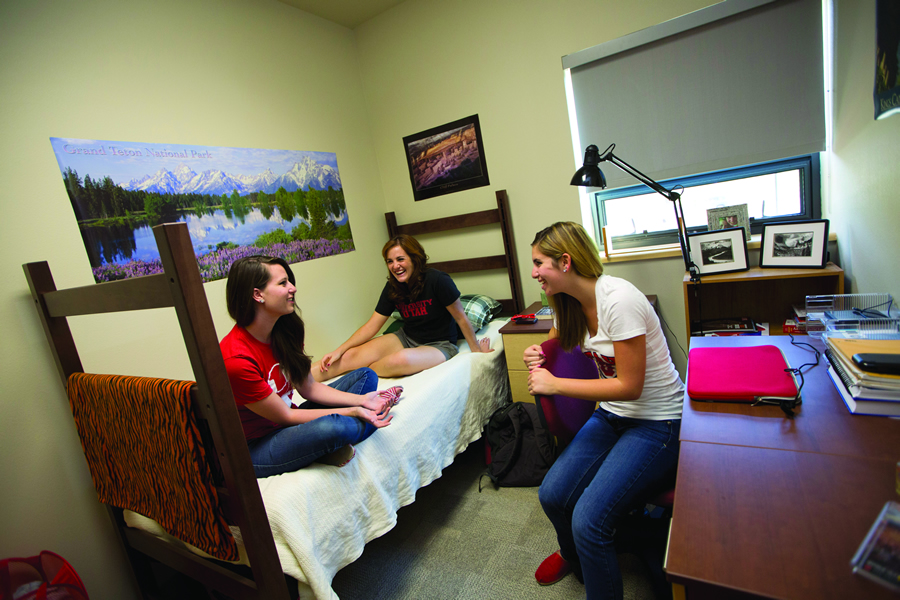 Students live in four- or eight-person apartments in the Honors Residential Scholars Community.

“Research shows that students who live on campus stay engaged, do better academically, and graduate earlier than those who live elsewhere,” says Torti. “This building makes it easy for students to engage our four-year program.”

The design makes optimal use of the site with ample use of natural light, and includes windows that open to take advantage of canyon breezes. Proximity to the TRAX line provides easy access to shopping and attractions.

“The seven-minute ride downtown and secure bike storage with bike-in, bike-out access make having a car on this campus obsolete,” Torti notes.

The apartment wing is private, but the building entry and the amenities on the first floor are open to everyone on campus.

The lobby is open and staffed by students 24 hours a day, offering a market with groceries, snacks, prepared meals, a coffee shop, and lounge areas.

Classrooms and offices occupy one wing off the lobby. The Virginia and L.E. Simmons “Big Ideas” Innovation Center is a large open classroom planned for many uses. The windows have a special coating that turns them into writable white boards.

Furniture can be arranged to suit the size and style of just about any class. All classrooms have wireless computer access and can be subdivided for small group study.

Each floor also includes a dashboard system to monitor and display electrical use throughout the building. 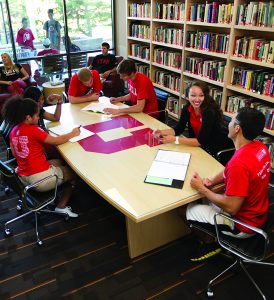 A group visits in a common area of the Honors Residential Scholars Community. 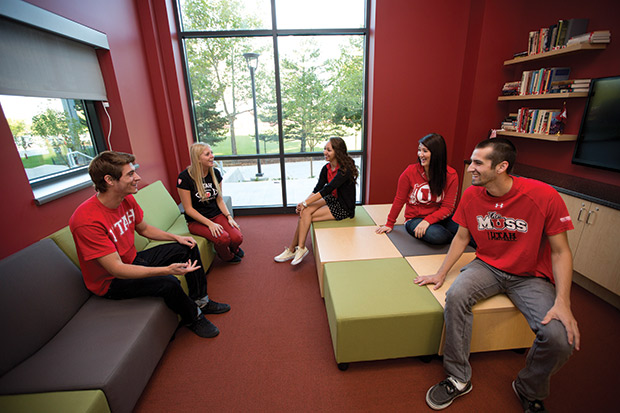 Classrooms in the Honors Residential building all have wireless computer access.

The community lobby is open to all U students. 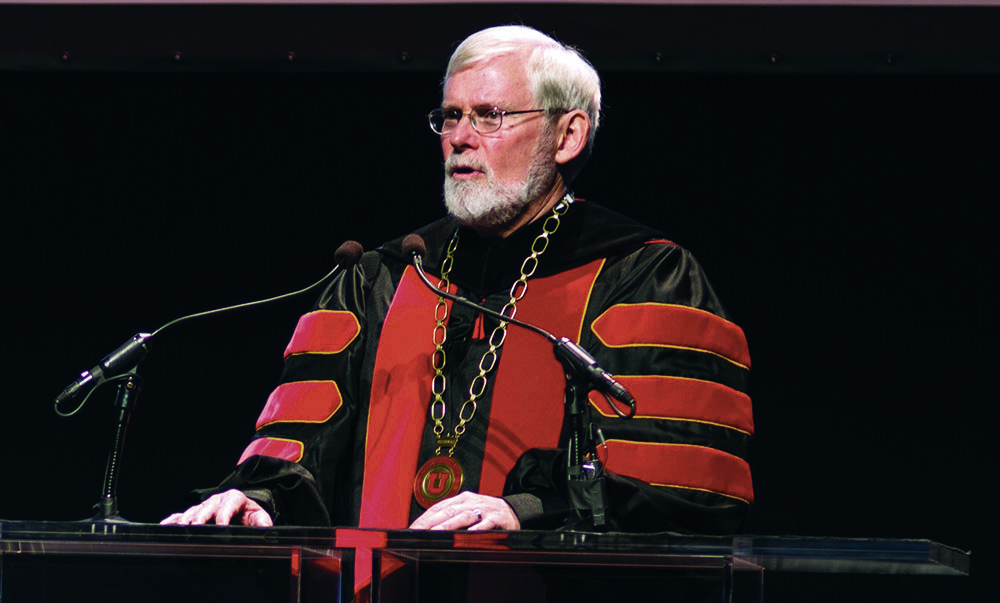 President David W. Pershing speaks at his inauguration ceremony at Kingsbury Hall. Much of the speech centered on his desire to improve the undergraduate experience. (Photo by Lawrence Boye)

David W. Pershing was officially inaugurated on October 25 as the 15th president of the University of Utah. Pershing, a Distinguished Professor of chemical engineering and former longtime academic vice president at the U, was selected by the State Board of Regents earlier in 2012 to succeed Michael K. Young.

President Pershing’s inaugural address highlighted many of the goals he hopes to accomplish. Much of the speech centered on his desire to improve the undergraduate experience at the University. “Students must be job No. 1,” he said.

He noted many of the recent changes implemented in the admissions process, including taking a more “holistic” approach to examining a potential student’s suitability for college. While emphasizing the U’s commitment to diversity and affordability, Pershing also made note of his “presidential promise”: his commitment to ensuring that all incoming students have at least one transformative experience during their time at the U, whether working one-on-one with a well-known professor, or perhaps participating in some form of study abroad program.

Pershing also announced that the U intends to build a 400-bed residential entrepreneurship institute, as well as explore opportunities for joining a multiuniversity campus in South Korea.

The inauguration followed a week of special events at the University, which included a Community Engagement Day on October 23 with opportunities for faculty and staff to join social service projects, and a student social with the new president on October 24.

The George S. and Dolores Doré Eccles Foundation has provided a $3 million “capstone” grant for a much-anticipated new Student Life Center at the U. The grant completes funding needed to begin construction on the center, slated to be a centerpiece of campus activity that will include state-of-the-art facilities for recreation, fitness, and social activities. Groundbreaking is scheduled for spring 2013, with completion in time for the start of the U’s fall semester in 2014. The 172,000-square-foot facility has been a priority of Associated Students of the University of Utah leaders for more than five years, and they approved an increase in student fees in order to bond for the majority of the facility’s cost. The Eccles Foundation grant provides significant momentum toward the $6 million private fundraising campaign for the project, which also includes an early leadership gift of $1 million from Kem Gardner BA’67 JD’70 and a $1 million pledge from the University Federal Credit Union. The Student Life Center will be open year-round, seven days per week, and will offer an indoor running track, wellness clinic, café, and study nooks, among other amenities.

The U’s Student Life Center, shown in this rendering, will be open year-round, seven days a week.

Audrey E. Bush BS’41 MFA’59, 92, principal bassist of the Utah Symphony for 35 years and a U adjunct faculty member in music for 36 years

Lorenzo “Ren” Neville Hoopes ex’37, 98, a longtime member of the U’s National Advisory Council and strong supporter of the U

William Lewis Roberts, 52, a U professor and medical director at ARUP Laboratories