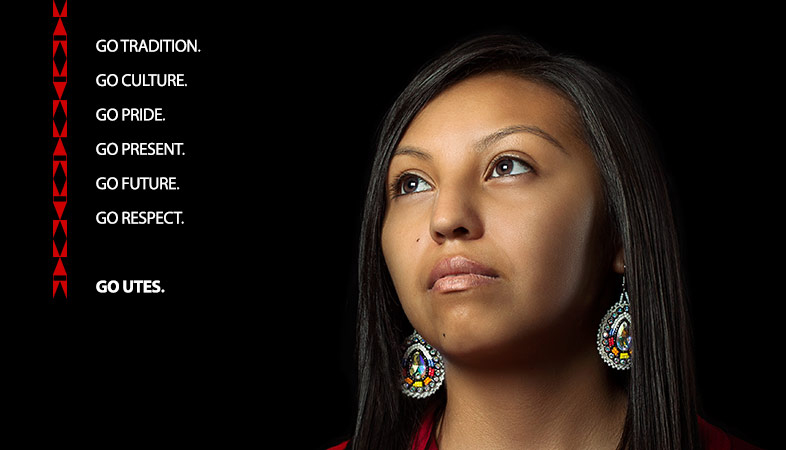 As part of the 2014 Memorandum of Understanding between the Ute Indian Tribe and the University of Utah, a scholarship fund for eligible tribal members has been established through the University’s Scholarship Office. The U Athletics Department and the Ute Tribe also began a “Ute Proud” campaign in late August to raise awareness at sports events about what it means to be a Ute. And the University launched a website, uteproud.utah.edu, to educate the U community and fans about the tribe’s culture and history.

The University and the tribe signed the new agreement in April, allowing the U to continue using the name “Utes” for its sports teams. The five-year agreement will be reviewed annually.

University departments have long offered a variety of scholarships for Native American students. The scholarships created in September are the first specifically for Ute students and in part recognize the tribe’s permission to use the “Utes” name for the U’s athletics teams. “The University community is proud of its ongoing relationship with the Ute Indian Tribe, and the scholarship fund is one step in our efforts to promote educational benefits for tribal youth,” says Mary Parker, the U’s associate vice president of enrollment management.

Franci Taylor, director of the University’s American Indian Resource Center, says that according to student surveys and comments, lack of funding is what a majority of American Indian students list as the most significant barrier to completion of a college degree. “Many people have a misconception that Native American students are fully funded by the U.S. government, the state, or their tribes. Unfortunately, this is untrue,” she says. “Through these scholarships, it is the University’s aim to make college as affordable and accessible to as many bright and motivated students as we can.”

Scholarships will be awarded by the Scholarship Selection Committee, composed of two members of the Ute Indian Tribe and three members of University administration—the associate vice president for enrollment, the scholarship director, and the director of the American Indian Resource Center. The number of scholarships available each year will depend on the number of eligible applicants and the amounts available. Applicants for the scholarships, which will amount to $8,000 for the year ($4,000 per semester), will be evaluated on academic merit, leadership, commitment to citizenship, school activities, and community engagement, in addition to tribal affiliation.

“We welcome all positive educational opportunities for Ute and other American Indian youth,” says Forrest Cuch, a member of the Ute Indian Tribe and the scholarship committee. “Scholarships will be a strong encouragement to our kids to continue their educations.”

Cuch is featured in an educational video that the U Athletics Department launched in August. The video has been played on the video board at all Utah home sports events. U Athletics also created Ute Proud T-shirts, bearing a design that incorporates a graphic by a Ute artist, the circle and feather logo, and the Ute Tribe’s official seal. All proceeds from the T-shirt sales will benefit Ute Indian scholarships and youth programs. Utah Athletics also has been distributing Ute Proud information cards at all athletics events, to encourage fans to learn more about the Ute Indian Tribe.

The Ute Proud campaign included Native American heritage awareness promotion at a Utah football game and a U men’s basketball game in November. For the football game, the U team wore helmets with the Ute tribal seal, and the game ball was given to a representative of the tribe. At both the football and basketball games, the Ute Honor Guard presented the U.S. flag, and a special halftime performance was arranged by the Ute Tribe’s Pow Wow Committee. “We feel honored to represent the Ute Tribe,” says U Athletics Director Chris Hill MEd’74 PhD’82. “Our teams, coaches, staff, and the entire University community hope our fans will join us in representing the Utes with dignity and respect at all times, and proudly saying ‘Go Utes!’ ”

The University of Utah began an initiative in October to recruit, retain, and graduate more women students. Debra Daniels MSW’84, director of the U’s Women’s Resource Center since 2003, was named to an additional role as assistant vice president of the Women’s Enrollment Initiative and will lead the new efforts. 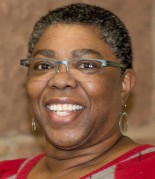 “In her expanded role, we will establish more connections across campus, in schools, and with business leaders in our community to help remove obstacles that prevent women from going to school and achieving,” says Barbara Snyder, the U’s vice president for student affairs. “The entire community will be richer for it.”

Currently, although the percentage of women graduates from the U is about equal to that of men, women’s enrollment lags behind men’s by 20 percent. In 2014, 54 percent of women applicants were accepted, but just 47 percent enrolled. Meanwhile, Utah has the fourth largest wage gap in the country, with women earning 30 percent less than men. The U initiative aims to meet the needs of girls and women from high school through college and to provide the information, services, and support to help them realize their academic goals.

“Graduate degrees that lead to professional careers increase a woman’s opportunities for advancement and higher earning power,” Daniels says. “All lead to a more prosperous and just community for everyone.”

“Chase Peterson loved the University of Utah,” current U President David W. Pershing wrote in a tribute. “His efforts to enhance the U’s teaching and research mission will be his legacy, evident always in the careers and contributions of thousands of students whose lives were made better by his service.”

Peterson was born in Logan, Utah, to E.G. and Phebe Peterson. His father was president of what is now Utah State University. Chase Peterson received a bachelor’s degree in 1952 and a medical doctorate in 1956, both from Harvard University. He and his wife, Grethe, returned in 1961 to Salt Lake City, where he accepted a position as an endocrinologist at the Salt Lake Clinic. In 1967, he and his family returned to Harvard, where Peterson was dean of admissions. Five years later, he became Harvard’s vice president for alumni affairs and development. In 1977, Peterson was tapped to be the U’s vice president of health sciences, and in 1983, he became the U’s 14th president.

After his retirement in 1991, he stayed involved with the University and medical school and ended his career as a physician working at Salt Lake City’s Fourth Street Clinic for the homeless. 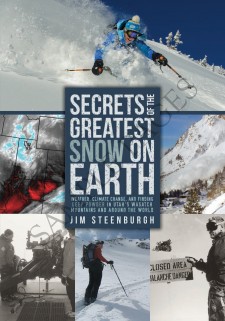 Utah and its ski industry have long claimed to have the greatest snow on Earth— the state has even trademarked the phrase. In Secrets of the Greatest Snow on Earth, University of Utah professor Jim Steenburgh investigates weather in Utah’s Wasatch Mountains and shows how and why Utah’s powder lives up to its reputation.

The book, published in November by Utah State University Press, also examines ski and snowboard regions beyond Utah, providing a meteorological guide to mountain weather and snow climates around the world. “Secrets of the Greatest Snow on Earth covers all of the essential topics for Utah powder lovers of every stripe,” wrote Nathan Rafferty, president of Ski Utah, in reviewing the book for the publisher.

Steenburgh, a U professor of atmospheric sciences, is an avid backcountry and resort skier. He also created a popular blog, Wasatch Weather Weenies. Chapters in his new book explore mountain weather, avalanches and snow safety, historical accounts of weather events and snow conditions, and the basics of climate and weather forecasting. The book also features 150 color photographs.

University of Utah Health Care has won the University HealthSystem Consortium’s Quality Leadership Award for the fifth year in a row.

The U placed among the top 10 in the prestigious quality and safety rankings, which compare teaching hospitals based on quality measures, patient safety and satisfaction indicators, mortality rates, and readmissions. This year, the University ranked sixth out of 104 participating medical centers.

“Being in the top 10 in quality means our community has access to some of the best health care in the country,” says Vivian S. Lee, the U’s senior vice president for Health Sciences, dean of the School of Medicine, and CEO of U Health Care. 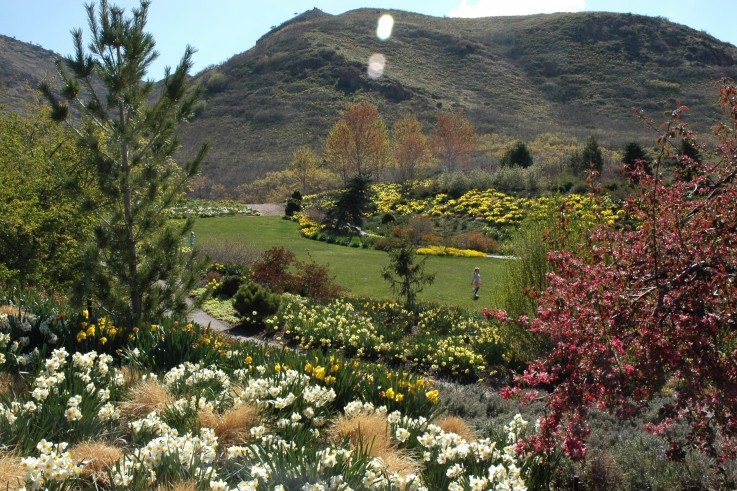 The University of Utah’s Red Butte Garden has been ranked by Best Masters Programs as No. 2 among 50 of the most stunning university arboretums and gardens. Best Masters is an independent online guide to master’s degree programs. The list includes universities that emphasize conservation, sustainability, and education within their greenhouses, landscapes, and nature preserves. The gardens in the list are located around the world.

Gardens and arboretums considered for the list were identified using information from the Morton Register of Arboreta, Botanic Gardens Conservation International, the American Horticultural Society, and other public data sources. Evaluations were made based on garden size, variety of plant species, special accreditations, and unique attributes that contribute to the garden’s atmosphere.

The University of Utah in September completed construction on an environmentally friendly community gathering space for students living on campus. Located near the Peterson Heritage Center and between the Shoreline Ridge apartments, the Student Solar Plaza includes solar panel canopies with built-in tables and chairs, gas barbecue, fire pit, and electrical outlets. 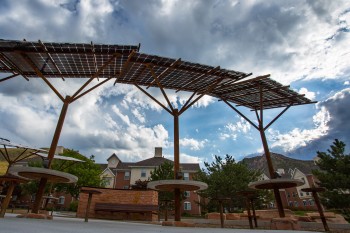 “Students spearheaded this project because we were lacking an outdoor common area where we can comfortably study, hold activities, and visit with friends,” says Jenna Matsumura, a student leader working with the project. “This space will not only help create a more cohesive community among the apartment residents, but it will also be a visual representation of our commitment to sustainability efforts.”

Constructed into eight canopies, the 32 bifacial solar panels, which provide up to 35 percent more kWh than their standard module counterparts, will offset the electricity used by the residence halls.

An asteroid has been named “Univofutah” after the University of Utah. Discovered in September 2008 by longtime Utah astronomy educator Patrick Wiggins, the asteroid also known as 391795 (2008 RV77) this past September was renamed Univofutah by the International Astronomical Union’s Minor Planet Center in Cambridge, Massachusetts. Wiggins says names must be limited to 16 characters, ruling out the U’s full name.

“There aren’t too many other universities on the whole planet with asteroids named after them,” says Wiggins, who works as a part-time public education assistant in the U’s Department of Physics and Astronomy. “So that puts the U in rather rarefied company.”

The asteroid “is no more than 2 kilometers (1.2 miles) across,” he says. Because of its small size and distance, it is “too far away for even the Hubble Space Telescope to determine the shape.”

American West Center Celebrates 50 Years at the University of Utah 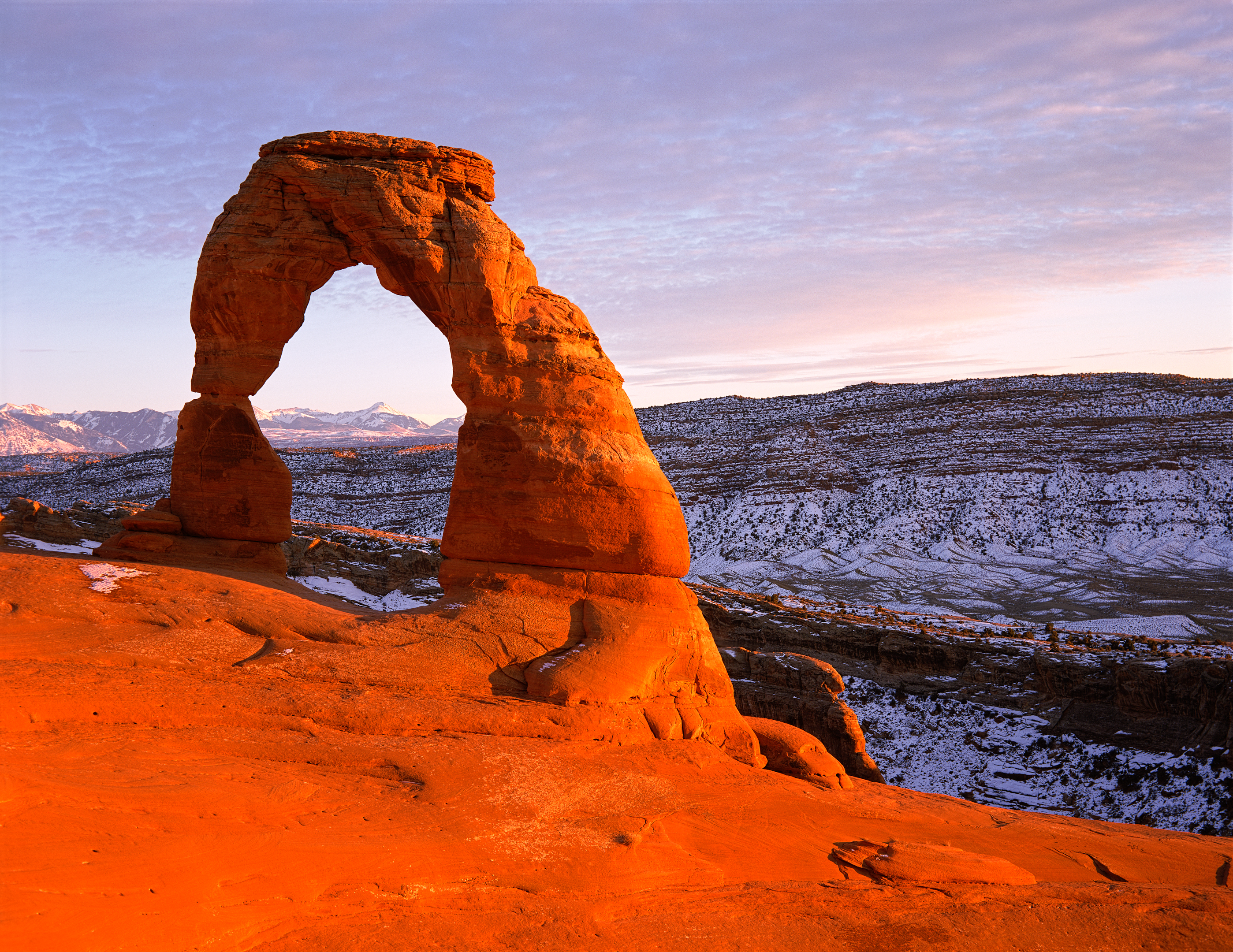 The University of Utah’s American West Center marked its 50th anniversary in 2014. The center, the oldest regional studies center in the West, focuses on preserving the region’s history through oral histories, documentary archives, historical and policy analyses, textbooks, and a statewide curriculum.

“Regional studies illustrate both the unique aspects of a place as well as the different ways national and global changes are felt in communities,” says the center’s director, Gregory Smoak PhD’99, a U associate professor of history.

The center’s work has included collecting and archiving more than 7,000 oral histories, many from Native Americans, Japanese Americans, and Utah’s Latino and Latina residents; creating an extensive digital archive of documents pertaining to Utah’s American Indian tribes; and providing educational support to the tribes and to school districts.