A century ago, University of Utah administrators opened a small art gallery in the Park Building on Presidents Circle. Today, the Utah Museum of Fine Arts (UMFA), the official fine arts museum of both the University and the state of Utah, collects, interprets, and preserves a permanent collection of 19,000 objects—ranging from antiquities and European masterworks to art of the American West and international contemporary art. Some highlights over the years: 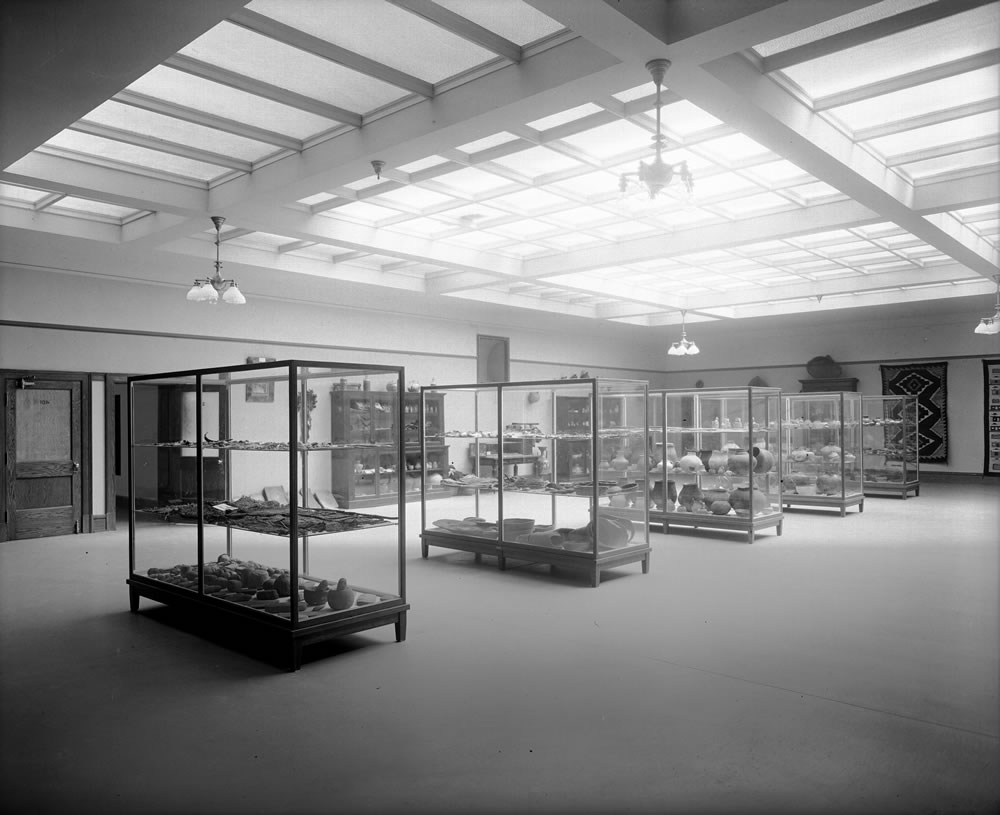 The Administration Building, now known as the Park Building, opens with an art gallery on the top floor. The value of the fledgling collection: $2,660. 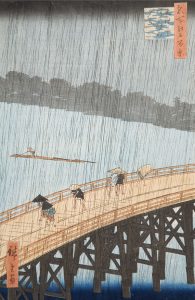 A gift of 27 Japanese woodcuts and prints from James L. Franken and his wife, Charlotte, adds diversity to the collection.

Under U President A. Ray Olpin, the School of Fine Arts is organized, the Utah Museum of Fine Arts is incorporated, and the Park Building gallery is renovated to accommodate a $300,000 collection donated by Winifred Kimball Hudnut. 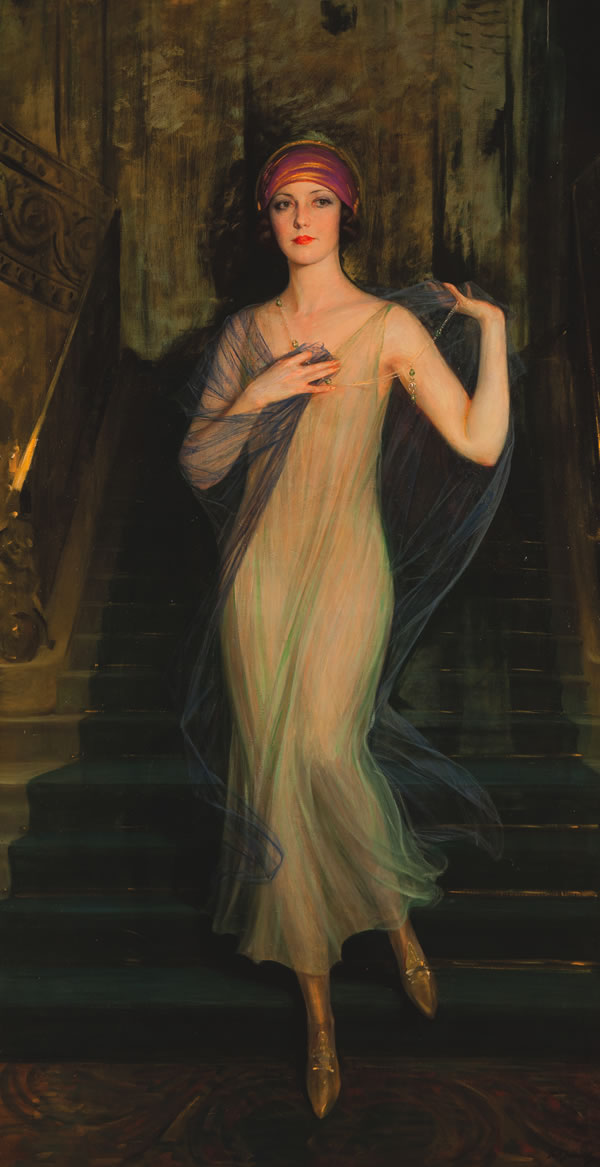 The Utah Museum of Fine Arts opens with a private reception on May 6.

The UMFA moves into expanded gallery space adjacent to the newly constructed Arts and Architecture Center.

The UMFA becomes the first university art museum in the West to be nationally accredited by the American Association of Museums. 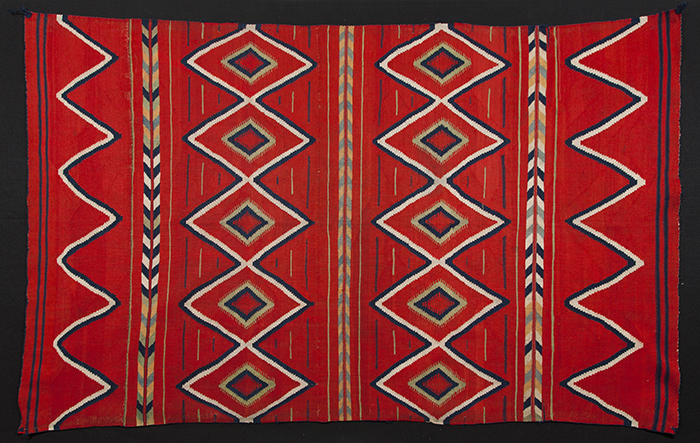 Federal judge Willis W. Ritter and his wife, Rita, donate a collection of about 150 Navajo weavings.

The museum begins annual acquisition of major artworks with funding from the Marriner S. Eccles Foundation.

The museum establishes the Dr. James E. and Debra Ann Pearl Collection of Photographs, featuring more than 4,000 objects that include the works of important 20th-century photographers.

The Christensen Fund’s gift of more than 250 objects from Asian and Southeast Asian cultures provides a cornerstone for the museum’s Asian art collection. 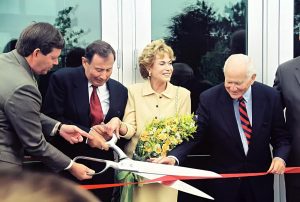 Ambassador John Price BS’56 and his wife, Marcia BA’57, along with other dignitaries cut the ribbon at the official opening of the new museum building that their substantial gift helped make possible.

The UMFA curates a centennial exhibit of work from artists across campus in a new Presidents Gallery in the home of the U’s first art gallery, the Park Building. 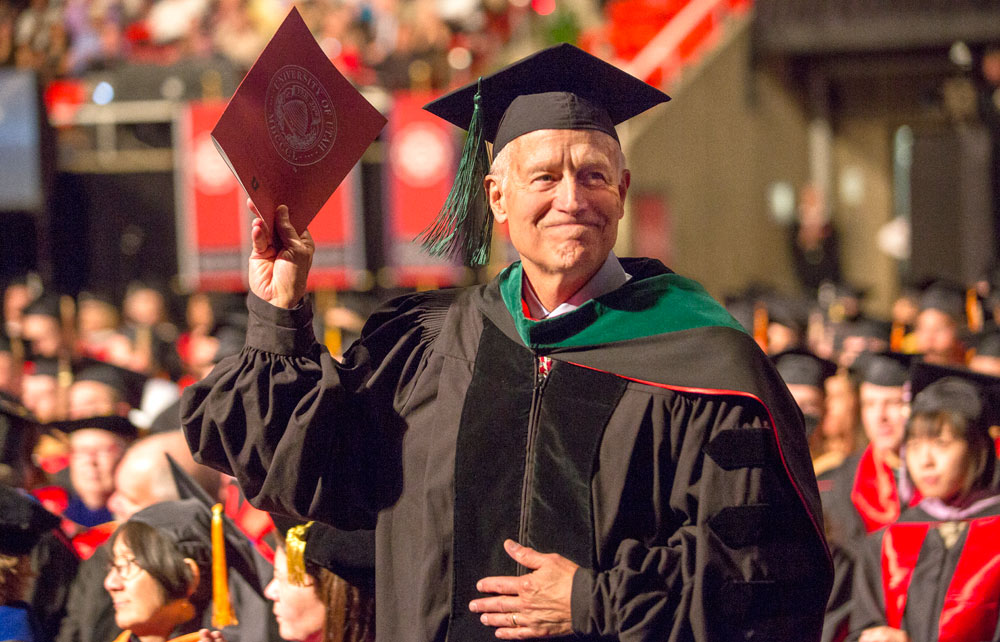 Dr. Randall J. Olson BA’70 MD’73, professor and chair of ophthalmology and visual sciences and chief executive officer of the John A. Moran Eye Center at the University of Utah, was honored with the 2014 Rosenblatt Prize for Excellence, the U’s most prestigious award. The $40,000 gift is presented annually to a faculty member who displays excellence in teaching, research, and administrative efforts.

“Dr. Olson has a long, rich history with the University and is an inspired choice for this honor,” U President David W. Pershing says.

“His forward-thinking leadership has effectively put the Moran Eye Center on the national map, bringing life-changing research and outreach, renowned patient care, and academic excellence together in one outstanding institution.”

Olson received his medical degree from the U School of Medicine, where he has been a faculty member since 1979 and full professor from 1982. He was appointed the first John A. Moran Presidential Chair of the School of Medicine in 1997 and became the CEO of the Moran Eye Center in 2006. Olson specializes in research dealing with cataract surgery complications and infectious ophthalmic diseases. 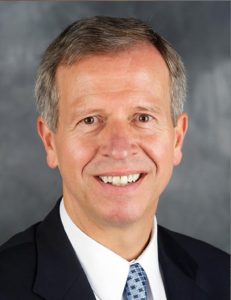 Perrin came to the U from the University of North Carolina at Greensboro, where he had been provost and executive vice chancellor. He is an expert in athletic training and served as editor-inchief of the Journal of Athletic Training and founding editor of the Journal of Sport Rehabilitation. Before becoming provost, Perrin served as North Carolina- Greensboro’s dean of the School of Health and Human Performance. He received his doctorate in exercise physiology from the University of Pittsburgh. 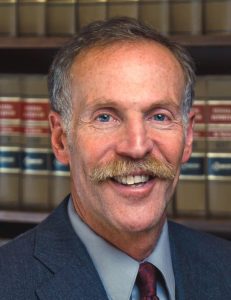 Adler, who had been serving as interim dean of the College of Law since 2013, holds the U’s James I. Farr Presidential Chair in Law and is a Distinguished Professor of Law.

After graduating from Georgetown University’s Law Center, he had an acclaimed career as a practicing lawyer, including working for the Pennsylvania Department of Environmental Resources and the Natural Resources Defense Council. He joined the University of Utah faculty in 1994 and is one of the nation’s leading experts in both environmental law and water law. 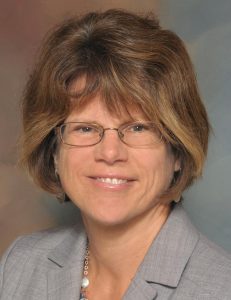 Berg, professor of psychology at the University of Utah, had served as interim dean of the College of Social and Behavioral Science since 2013. She was chair of the psychology department from 2008 to 2011. She joined the U faculty in 1987 and holds a doctorate in psychology from Yale University. Her research examines how individuals in close relationships deal with stress, decision making, and problem solving around chronic health conditions such as diabetes and cancer. 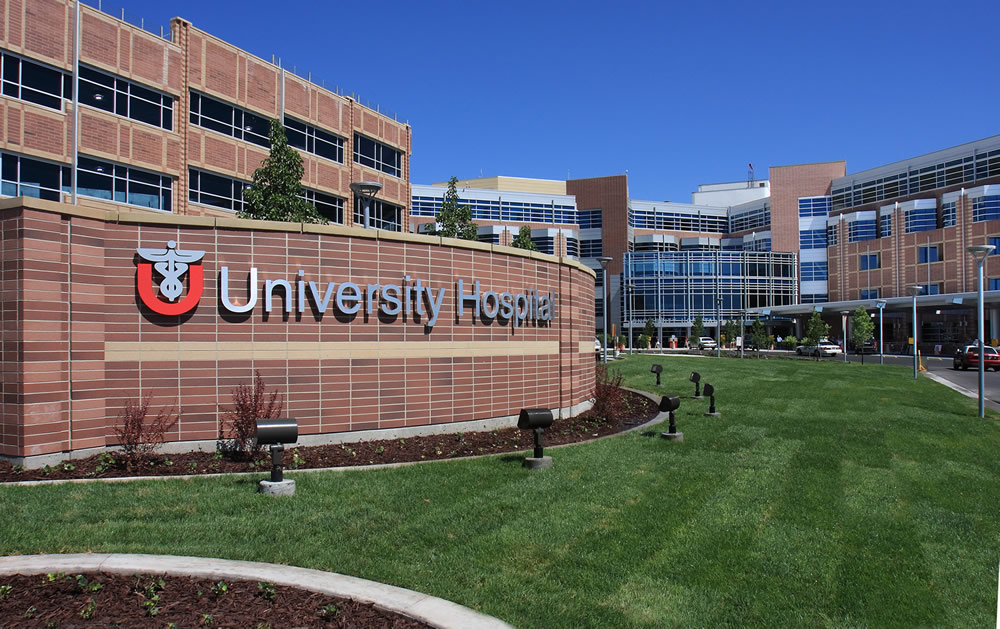 University of Utah Health Care is the No. 1 health care system in the state of Utah, according to U.S. News & World Report’s 2014-15 Best Hospitals rankings.

The U also was recognized as “high-performing” in eight specialties, including cardiology and heart surgery, gynecology, neurology and neurosurgery, urology, nephrology, orthopedics, pulmonary, and cancer care.

Approximately 5,000 hospitals in 94 U.S. metro areas were eligible for this year’s rankings. To meet the criteria, hospitals must offer each of 16 medical specialties, and then are ranked according to death rates, patient safety rates, procedure volume, and other objective data. 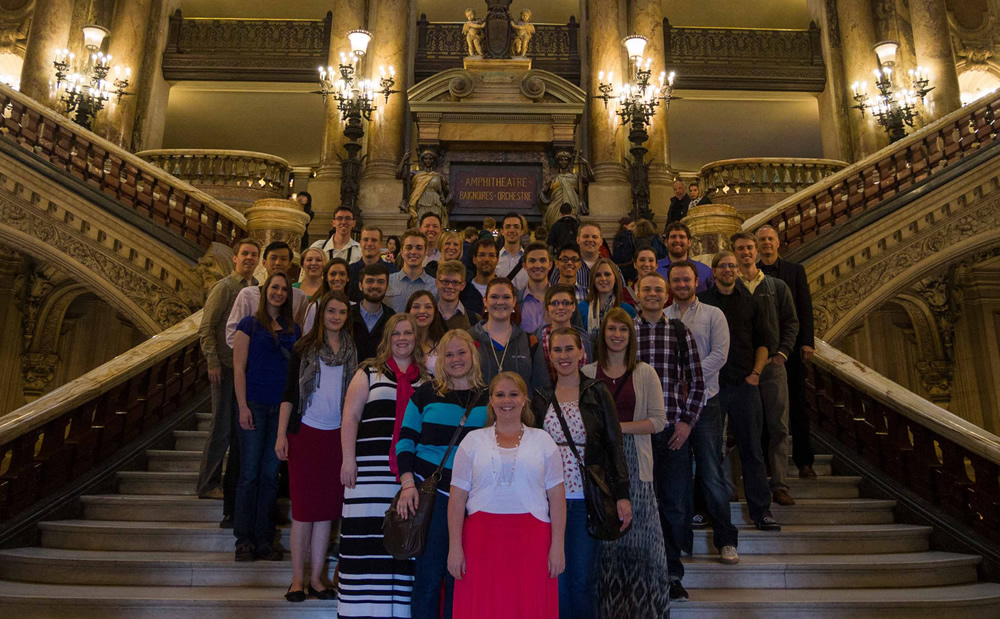 The University of Utah Chamber Choir competed with choral groups from around the world and won first place in the prestigious Florilège Vocal de Tours held in Tours, France.

The choir sang “Dark Like Me” in the winning round. It was the first time its composer, Thierry Machuel, had heard an American choir sing his piece, which he based on a poem by Langston Hughes. The choir also won the Audience Favorite Award during the competition, held May 30 to June 1.

During their 12-day tour of France, the choir performed in Normandy for the 70th anniversary of D-Day and at concerts in Paris at Notre Dame Cathedral, the Church of the Madeleine, and the American Cathedral. The choir is directed by Barlow Bradford BMu’85, associate professor of choral studies.

New Chair Appointed for University’s Board of Trustees 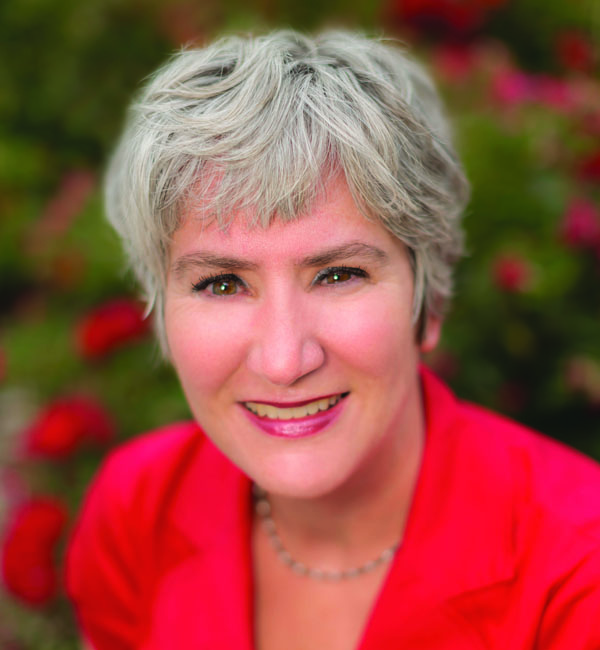 Michele Mattsson HBA’85 JD’88 has been elected chair of the University of Utah’s Board of Trustees. Mattsson, the first woman to hold the position, had served as vice chair since 2009.

Since 2001, Mattsson has been chief appellate mediator at the Utah Court of Appeals. She holds a bachelor’s degree in English and a juris doctor from the University of Utah. She has also served in many volunteer positions at the U since 2005, including as president of the Alumni Association’s Board of Directors, and a member of the boards of Red Butte Garden, the Utah Museum of Fine Arts, and KUED. Mattsson succeeds Clark Ivory as chair of the Board of Trustees. 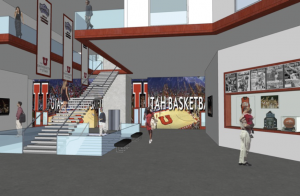 Utah Athletics broke ground this past spring on the Jon M. and Karen Huntsman Basketball Center, a state-of-the- art facility that will house both the men’s and women’s teams. The new facility will feature a Utah Performance Center and sports medicine and strength and conditioning facilities. The building will also contain film rooms, locker rooms, two gymnasiums, lounge areas, a nutrition center, a media center, and office space for coaching staffs. The project is slated for completion in July 2015.

The 80,000-square-foot center will be located just northwest of the 15,000- seat arena bearing the Huntsman name. As part of the project, renovations to that building are under way. Lighting, sound, and draping for other sports, as well as two grand entrances for a hall of fame and legacy hall, are among the arena priorities.

The University of Utah has opted to change the lyrics of its fight song, “Utah Man,” to make it more inclusive, after students expressed concerns that the old lyrics could be seen as sexist or racist.

The phrase “our coeds are the fairest” is being replaced with “our students are the finest,” and “no other gang of college men” is now “no rival band of college fans.” Printed versions of the song also will have the word “fan” printed after “man,” leaving it up to singers to decide whether to use the gender-neutral “Utah fan” or stick with the old “Utah man.”

A task force of students, alumni, faculty, and staff reviewed the song and its history, as well as about 1,300 emails about the song’s lyrics. Earlier this year, the Associated Students of the University of Utah’s assembly had approved a resolution to examine revising the song to be more reflective of modern sensibilities.

“When printed officially by the University, this 2014 version of the fight song will be used, but historical renditions of the song will always be acceptable,” U President David W. Pershing said in a prepared statement. “We encourage you to sing—loudly and with pride—whichever version resonates with you.”