U Center in Montana Will Focus on Conservation 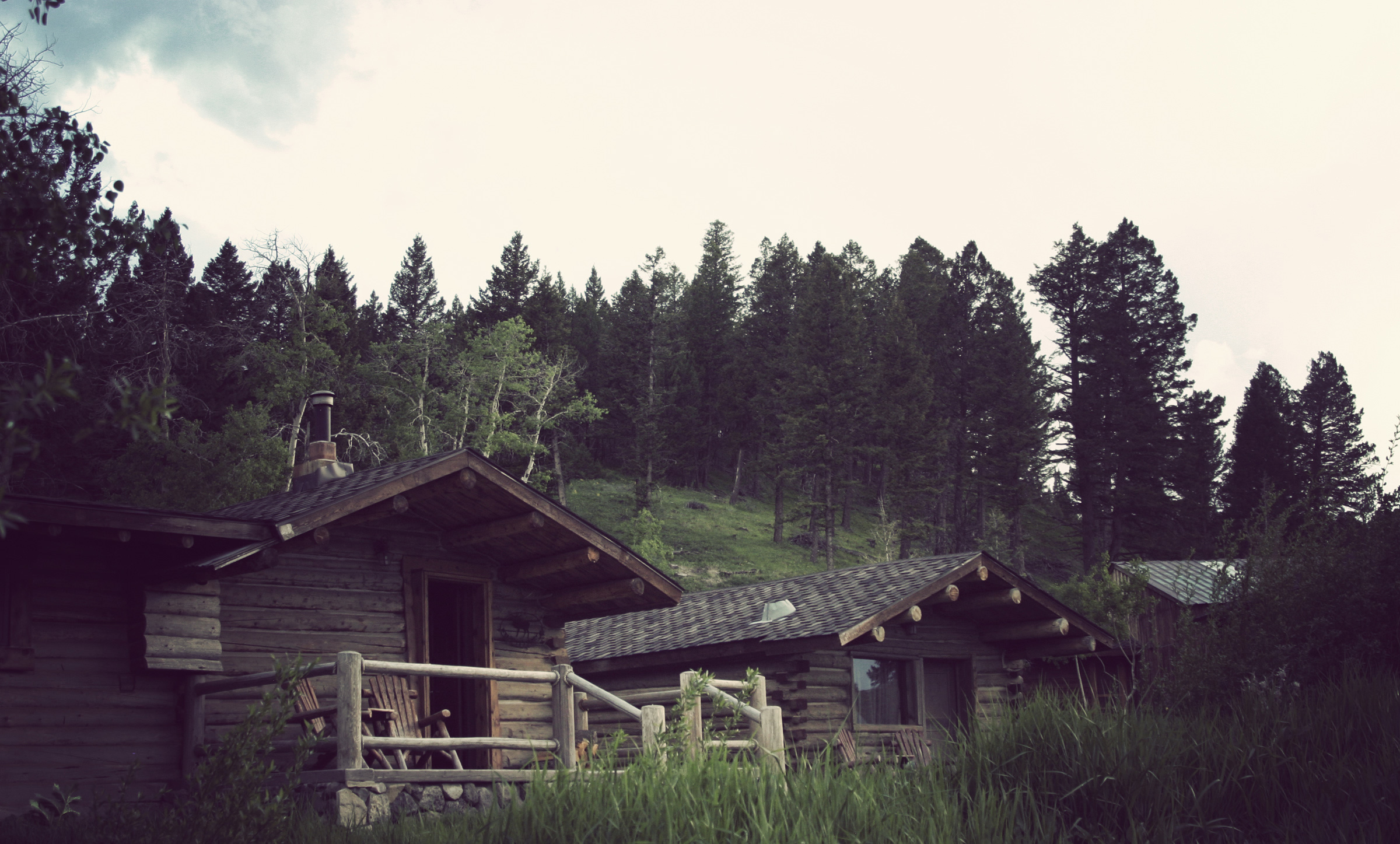 The University of Utah now has 16 acres of land and a renovated former ghost town in Montana’s Centennial Valley that will be used for courses in environmental conservation and related interdisciplinary study.

The U’s College of Humanities for the past three years has hosted pilot programs and workshops at the Environmental Humanities Education Center in Lakeview, Montana. In October, the University announced that the property’s owners, John and Melody Taft, and their friends Bill and Sandi Nicholson, who had helped support the renovations, were generously giving it to the U. The newly renamed Taft-Nicholson Environmental Humanities Education Center is now a fully approved center operated by the University of Utah. 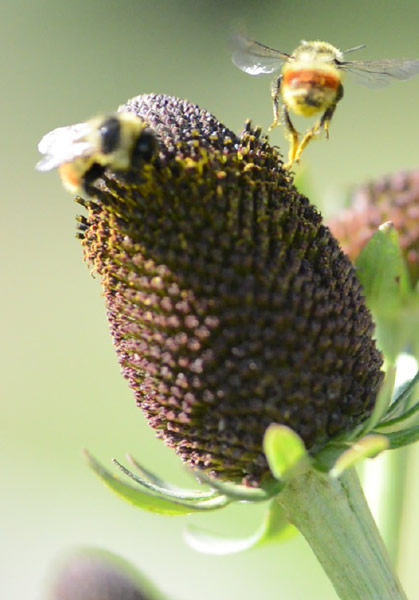 “We are truly grateful to the Tafts and Nicholsons as well as to the Conservation Endowment Fund for creating a center that allows all those who visit a rare opportunity to explore an environment with incredibly diverse ecosystems,” says Robert Newman, dean of the College of Humanities. “This gift represents a tremendous resource for the University of Utah as an education center for environmental research and transformative pedagogy.”

Melody and John Taft, a retired developer from California, years ago had built a cabin in the Centennial Valley and worked to help create conservation easements to preserve the land. To date, they have been the catalyst for successfully protecting more than 90 percent of the valley. As part of their conservation efforts, they also wanted to create a world-class education center. A dozen years ago, they purchased the nearby ghost town of Lakeview, located on the former stagecoach trail that cuts through the valley and leads into West Yellowstone, and set about renovating it. Sandi and Bill Nicholson, a former president of the multilevel marketing company Amway, also owned property nearby and helped contribute to the restoration. Together, the two couples have invested millions of dollars restoring and furnishing buildings and installing infrastructure and additional facilities so the town could function as an education center.

The Tafts approached colleges in Montana about creating the center, and when those talks didn’t pan out, the couple approached the University of Utah. While the U will own and operate the new center, other colleges also will continue to offer courses there, and the center will serve nonprofit organizations and private groups wishing to host programs that combine the humanities, arts, and environmental studies. The facilities include housing and meeting spaces for workshops, research activities, private events, and corporate retreats. 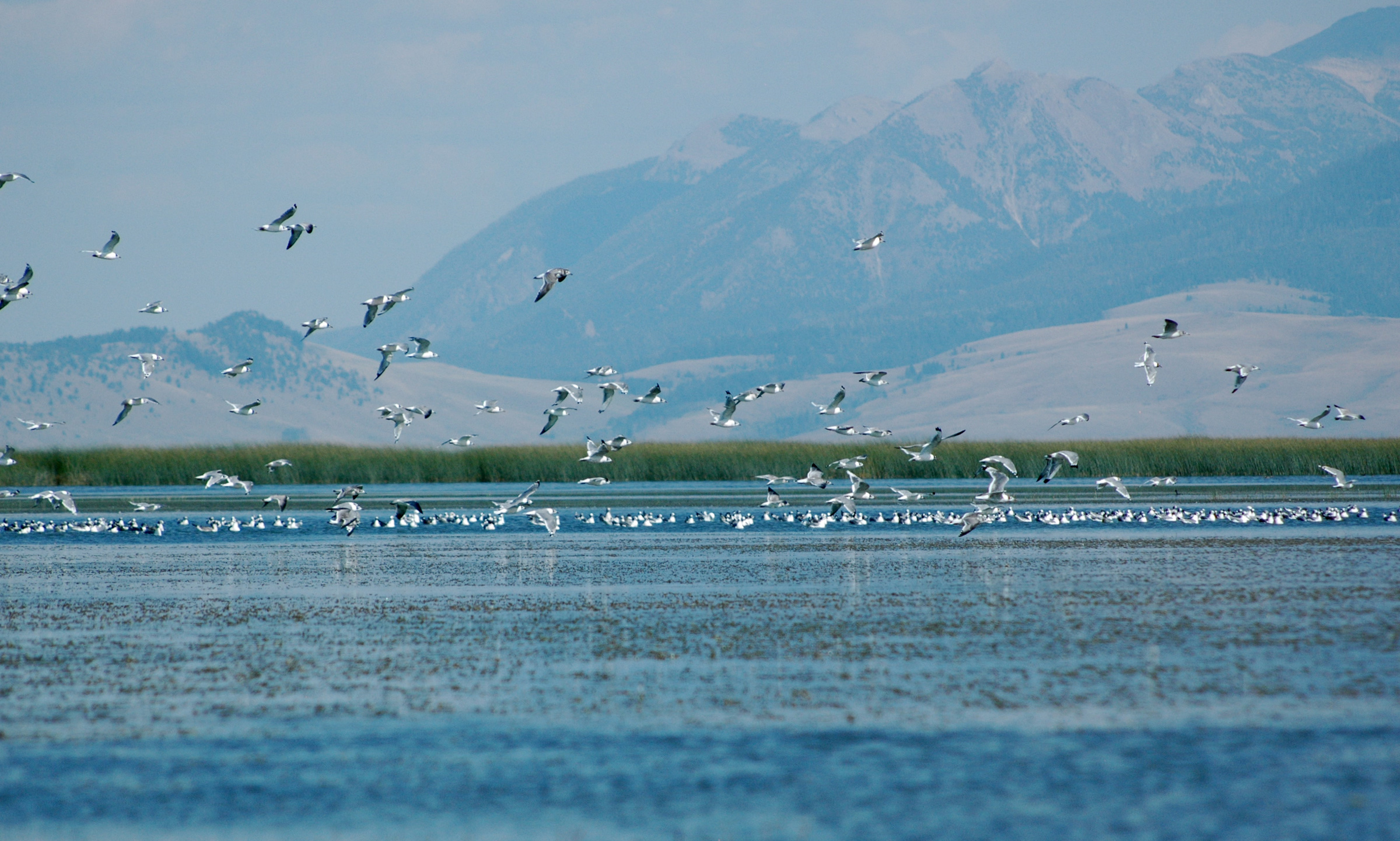 Located north and east of the Continental Divide along the Montana-Idaho border, the Centennial Valley is near the western edge of Yellowstone National Park and contains the largest wetland complex in the Greater Yellowstone Ecosystem. The programs and workshops at the center provide an innovative educational experience that introduces students and visitors to the ecology, history, wildlife, and conservation value of the area. “The center allows students to go beyond the traditional classroom experience,” says Mary Tull, the center’s director. “Here, students take their classroom knowledge into the field, where they can apply what they’re learning to practical solutions for real-world ecological problems.”

Huntsman Institute Expands to Focus on Cancer in Children

The University of Utah’s Huntsman Cancer Institute will create a 220,000-square-foot addition to house research laboratories that will study cancer in children and families and seek to develop treatments.

The new cancer research facility is projected to cost $100 million and will house laboratories and technology that will allow Huntsman researchers to study many more aspects of cancers that affect families, including the three leading causes of disease death in children: leukemia, sarcoma, and brain cancer. The new addition will be named the Primary Children’s and Families’ Research Center in honor of one of the principal donors of the expansion, The Church of Jesus Christ of Latter-day Saints, reflecting the church’s historical emphasis on children and families . 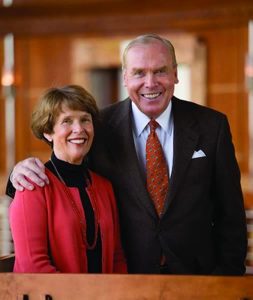 “From an empty hillside to one of the world’s leading cancer research and treatment facilities, our vision has always been to improve cancer outcomes for children and adults through innovative research,” says Jon M. Huntsman, Sr., the institute’s founder and principal benefactor. “To fulfill that dream, our world-class researchers need more space and equipment. Huntsman Cancer Institute’s research labs are at full capacity, yet patients all over the world are looking to us for new treatments to save their lives. This new addition will double our research space.”

The institute’s expansion comes at a time when the incidence and prevalence of cancers in all age groups—including children—is increasing, while funding for cancer research is on the decline. “Jon has for more than 20 years brought to life his vision for exceptional cancer research and care,” says U President David W. Pershing. “We are grateful that he has entrusted the University of Utah to carry out that vision.”

Programming and design for the new, six-floor expansion is already under way, and construction is slated to begin in 2014. The addition, which is the institute’s fourth major construction phase, is projected to extend from the southeast corner of the research arm of the original building. “Building on our strong foundation of achievement in cancer genetics, risk assessment, and prevention, the new facility will allow us to expand in areas of critical need and will dramatically accelerate our progress,” says Mary Beckerle, the institute’s chief executive officer and director. 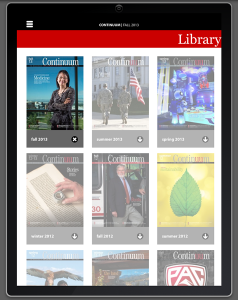 Continuum has launched a new app that allows iPad owners to read the online edition of the magazine on their tablet computers.The app includes all the articles, images, and multimedia features that the magazine’s website offers, all optimized for viewing on a tablet device.

To download the free app, simply go to the App Store in iTunes and search for “Continuum Magazine.”

An ongoing study shows the University of Utah’s move to the Pac-12 Conference in 2011 continues to generate substantial economic gains as well as improved perceptions of the University and the state.

According to the study, out-of-state football fans attending four Pac-12 football games at the U in 2012 spent an estimated $2.3 million on travel, food, and lodging. Television revenues brought in an additional $8 million. Total revenues increased $1.8 million over the inaugural 2011 season, and are projected to support 275 jobs—generating earnings of $6.6 million and state tax revenue of approximately $660,000.

The study, which is being conducted over multiple years by the U’s Center for Public Policy & Administration and the Bureau of Business and Economic Research, also showed that the vast majority of visiting fans had a good experience during their stay. Of the fans polled, 87 percent said they were treated well or very well by Utah fans.

Asked if their impressions of the University had changed during their visit, 43 percent said they had, and 98 percent of those say it changed for the better. Further, 62 percent said they were more likely to visit in the future because of their experience at the U.

University of Utah engineers will use a five-year, $16 million grant to conduct supercomputer simulations aimed at developing a prototype of a low-cost, low-emissions coal power plant that could electrify a midsized city.

The goal of this “predictive science” effort is to help power poor nations while also reducing greenhouse emissions in developed ones.

All three are professors in the U’s College of Engineering.

The researchers will use supercomputers to simulate and predict performance for a proposed 350-megawatt boiler system that would burn pulverized coal with pure oxygen rather than air.

The design, which hasn’t yet been built, would capture carbon dioxide released during power generation.

A remarkable new species of tyrannosaur has been unearthed in Grand Staircase-Escalante National Monument, in southern Utah. The huge carnivore lived 70 million to 95 million years ago, during the Late Cretaceous Period, and belongs to the same evolutionary branch as the Tyrannosaurus rex. 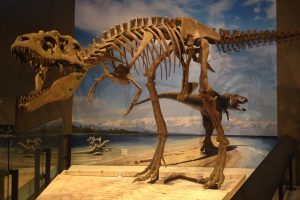 The discovery was announced in October in the open-access scientific journal PLoS ONE and unveiled on permanent exhibit in the Past Worlds Gallery at the Natural History Museum of Utah. The new species, Lythronax argestes, had a short narrow snout, a wide back of the skull, and forward-oriented eyes. Lythronax translates as “king of gore,” and argestes refers to the dinosaur’s geographic location in the American Southwest. Previously, paleontologists had thought this type of wide-skulled tyrannosaurid only appeared 70 million years ago, whereas Lythronax shows it had evolved at least 10 million years earlier.

The study, funded in large part by the Bureau of Land Management and the National Science Foundation, was led by Mark Loewen PhD’09, a research associate at the Natural History Museum of Utah who is also a U adjunct assistant professor of geology and geophysics. The skeleton was discovered by BLM employee Scott Richardson and excavated by a team from the museum and the national monument.

The Fort Douglas Military Museum, housed on the University of Utah campus, is the first location to acquire one of nine pieces of foundation saved from the World Trade Center after the September 11, 2001, terror attacks.

The 4.5-ton piece of concrete, rock, and steel rebar is the centerpiece of the museum’s new Utah’s Fallen Warrior Memorial, and Utah Governor Gary Herbert participated in a dedication ceremony in October.

The artifact will be housed in the new Fort Douglas Memorial Park, behind the museum. The park’s development was initiated by Park City resident Raette Belcher. “After meeting several Gold Star mothers, those whose sons or daughters lost their lives in military service, my heart was touched, and I set out to bring this memorial to Utah,” Belcher says.

In addition to the twin towers artifact, the park will feature a six-statue exhibit designed to salute women in military service. This exhibit is scheduled to be completed in early 2014. 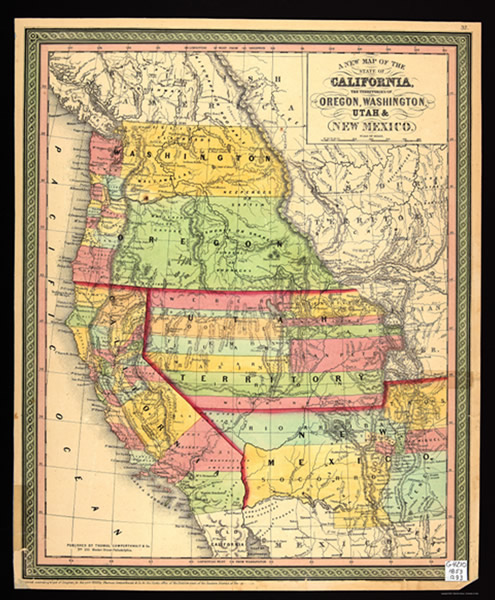 As part of the Utah Academic Library Consortium, the J. Willard Marriott Library at the University of Utah, in conjunction with the Mountain West Digital Library, has launched a project to digitize historical items from Western settlers.

The goal is to create an extensive online collection that will be available free of charge to the public. Scanning sessions were held this past fall in public libraries across the state. The families who own the materials retain ownership and receive high quality digital files of their family materials. Items have ranged from single letters and diaries to photographs to substantial collections of correspondences between pioneers and their families. Interested individuals can either make an appointment with the library or stop by with the materials they would like to include.