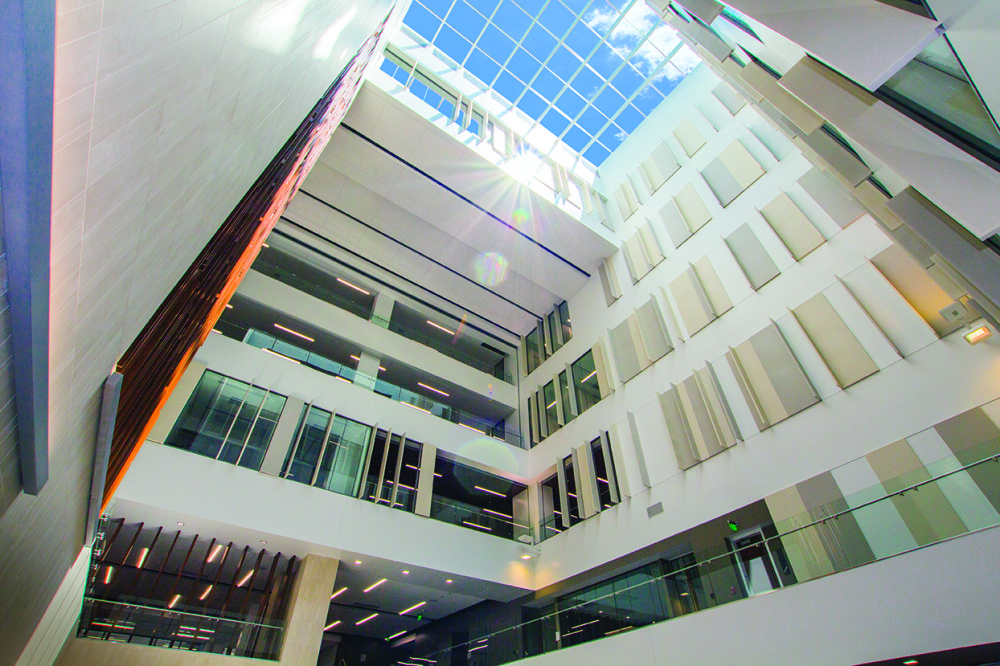 The new home of the University of Utah’s S.J. Quinney College of Law had its grand opening on September 1, with speakers including Utah Governor Gary Herbert, U President David W. Pershing, and law dean Bob Adler. Construction of the new building began in June 2013. The new, 155,000-square-foot facility provides a gateway to students and the community on the southwest corner of the U campus. The design emphasizes sustainability and energy efficiency, including the use of south-facing, solar-screening, low-emissivity, and insulated glass in the windows throughout. Welcoming features include a café and coffee shop to serve the University and the greater community, as well as a 450-seat conference center.

The comprehensive cancer center designation recognizes not only the outstanding cancer research, training, and public outreach programs that have long been conducted at Huntsman Cancer Institute, but acknowledges the exceptional depth and breadth of the institute’s research in each of the three major cancer research areas: laboratory, clinical, and population-based. The designation also recognizes Huntsman Cancer Institute for the impact of its research findings on national cancer care guidelines and improved patient outcomes.

“This designation is the result of professionalism and exceptional expertise of our physicians, scientists, and administrative staff at Huntsman Cancer Institute,” says Jon M. Huntsman, Sr., Huntsman Cancer Institute’s founder and chief benefactor. “Only a small percentage of the nation’s cancer programs have the excellence necessary to receive Comprehensive Cancer Center status. What a difference this will make to the cancer patients in our state, in the region, and in the world.”

A Comprehensive Cancer Center must demonstrate depth and breadth of cancer research, as well as substantial transdisciplinary research that bridges these scientific areas and changes cancer care. In addition, the center must demonstrate professional and public education and outreach capabilities, including the distribution of clinical and public health advances in the communities it serves. The evaluation is done by a team of national cancer experts, and includes a rigorous scientific review, a competitive grant process, and a site visit.

Jan D. Miller, the Ivor D. Thomas Distinguished Professor of Metallurgical Engineering at the University of Utah, was honored with the Rosenblatt Prize for Excellence, the U’s most prestigious award, this past May. The $40,000 gift is presented annually to a faculty member who displays excellence in teaching, research, and administrative efforts.

The Rosenblatt Prize Committee, a group of distinguished faculty members, recommends selected candidates for the award. University President David W. Pershing made the final selection. “Jan has been an outstanding faculty member for more than 40 years,” Pershing says. “He is a beloved mentor for his students, an excellent department chair, and a renowned international researcher.”

Miller holds a doctoral degree in metallurgical engineering from the Colorado School of Mines and began his career at the University of Utah in 1968. He became a full professor in 1978 and a Distinguished Professor in 2008, and he served as chair of the Department of Metallurgical Engineering from 2002 to 2013.

During his 47 years at the U, he has produced more than 600 publications, won millions of dollars in federal funding through grants and contracts, and secured more than 30 patents that have provided upwards of $750,000 in income to the U, making him one of the largest royalty earners for the University.

He is perhaps best known for his research contributions associated with the processing of mineral and energy resources, including patents on oil sands processing, resin recovery from Utah coal, and air-sparged hydrocyclone technology.

Miller has supervised the research of more than 100 graduate students, many of whom have received national awards for their thesis research and gone on to hold tenured faculty or administrative positions all over the world. He received seven best paper awards and four departmental teaching awards in four different decades, and he was elected by his peers to the National Academy of Engineering, one of the highest honors bestowed upon an engineer. 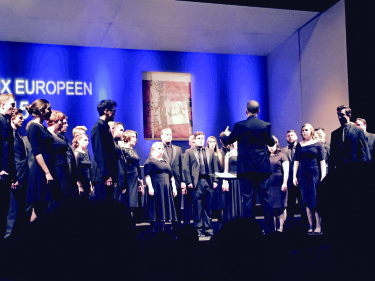 The University of Utah Chamber Choir won what is considered by some to be the world championship of amateur choral art, the European Choral Grand Prix. The competition in late May included choirs from all across the globe and had an international jury made up of judges from six different countries.

The U choir, directed by Barlow Bradford BMu’85, became qualified to compete after winning the prestigious Florilége Vocal de Tours in the summer of 2014. For the Grand Prix, they faced the winning choirs from the other regional competitions held in Italy, Hungary, Slovenia, Bulgaria, and Spain. “We had 25 minutes to walk in and show our stuff,” Bradford says. “They sang like a million bucks.”

The choir followed the competition with performances in early June in cathedrals in Paris, Normandy, and Barcelona. 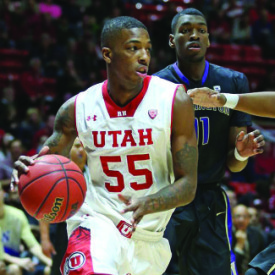 Utah’s Delon Wright BS’15 was drafted this summer by the Toronto Raptors as the 20th pick in the first round of the 2015 NBA Draft. Wright became the first Ute to be drafted since Andrew Bogut ex’05 went No. 1 in 2005 to the Milwaukee Bucks.

Wright won the Bob Cousy Award for the nation’s top point guard and was a Sporting News All-American this past season as the Utes advanced to the Sweet 16. He also became the first two-time All-Pac-12 honoree in Utah basketball history, was named the USBWA District VIII Player of the Year, and earned a spot on the John Wooden All-American Team.

As part of an expanded mission that reaches beyond the boundaries of the Kingsbury Hall stage into other venues and spaces on the University of Utah campus and in the community, the Kingsbury Hall Presents performing arts series has become UtahPresents. 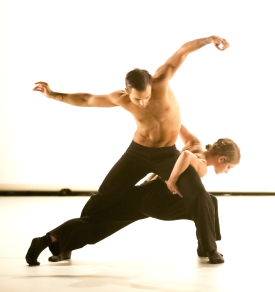 This evolution and expansion has the aim of infusing the campus and community with unique arts experiences through both live performances and community engagement activities. “Kingsbury Hall, the historic venue, and Kingsbury Hall Presents provide us with a strong foundation for this evolution,” says Brooke Horejsi, executive director of UtahPresents and assistant dean for art and creative engagement for the College of Fine Arts. “We are thrilled to announce a new name along with a new season of exciting performances in multiple venues, amazing connections between artists and community members, and a diversity of partnerships to deepen our impact.”

A highlight of the upcoming season includes Mercy Killers, a one-man show in partnership with the School of Medicine’s Division of Medical Ethics and Humanities that will engage both medical students and the public in dialogue about end-of-life decisions and the cost of health care in America. Another highlight will be an evening with tap legend Savion Glover, in concert with Jack DeJohnette, one of the most influential jazz drummers of his time, in a performance of percussion and rhythm. Prior to the public performance, Glover will work with junior high students, and DeJohnette will share his time and talent with U jazz students.

Student attendance at U arts events on campus has skyrocketed since 2011. For the fourth consecutive year, the number of student tickets issued to arts events on campus set a new record for audiences in the arts. During the 2014-15 academic year, the U issued 28,539 Arts Pass tickets, an increase of more than 20 percent over the year before. The Arts Pass program has been in existence since 2011 and allows students to use their UCard to get free or nearly free tickets to hundreds of arts events on campus each year, including those in the UtahPresents series.

The UtahPresents season begins September 19, as the new home of TEDx SaltLakeCity, an all-day event filled with speakers focused on a theme of “Upcycled Thinking.” 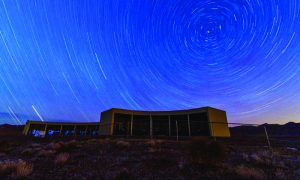 Physicists plan a $6.4 million expansion of the $25 million Telescope Array observatory in Utah so they can zero in on a “hot spot” that seems to be a source of the most powerful particles in the universe: ultrahigh-energy cosmic rays.

Japan will contribute $4.6 million, and University of Utah scientists will seek another $1.8 million to nearly quadruple the size of the existing 300-square-mile cosmic ray observatory in the desert west of Delta, Utah. The expansion will allow the next step aimed at identifying which objects in space produce ultra-high-energy cosmic rays. Luckily, they don’t get through Earth’s atmosphere.

“We know these particles exist, we know that they are coming from outside our galaxy, and we really don’t have a clue as to how nature pumps that much energy into them,” says Pierre Sokolsky, a University of Utah Distinguished Professor of physics and astronomy and principal investigator on the Telescope Array’s current National Science Foundation grant. “In order to have a clue, we need to know where they are coming from. This hot spot is our first hint.”

The planned expansion would make the Telescope Array almost as large and sensitive as the rival Pierre Auger cosmic ray observatory in Argentina. Together, they cover both the northern and southern skies.

U Among Top in Nation for Green Energy Use 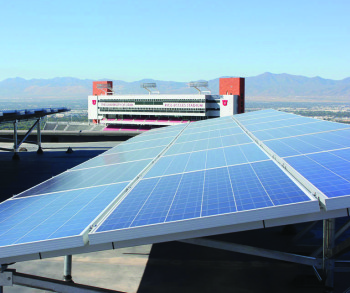 The U.S. Environmental Protection Agency has once again recognized the University of Utah as a top school for green power purchasing in its College and University Green Power Challenge.

The U ranked eighth in the nation—and first in the Pac-12—during the 2014-15 competition by purchasing 85,926,100 kilowatt-hours of renewable energy. The total represents 28 percent of the U’s total energy use, and it is equivalent to taking more than 12,400 cars off the road. The EPA recognized 39 schools that each purchased at least 10 million kwh of green power.

Much of the credit for the U’s accomplishment is owed to students. More than a decade ago, a student-led campaign created a clean energy fund. Because of the campaign, every semester, each student contributes $1 toward renewable power.