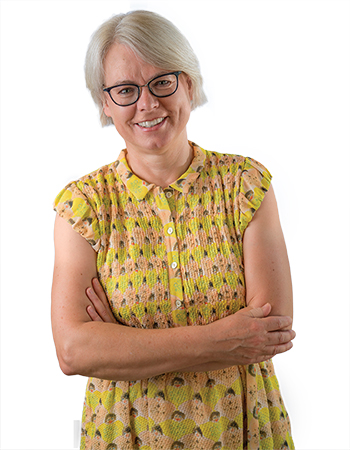 Meet Katharina Gerstenberger, chair of the Department of Languages and Literature, who developed a love for reading as a child growing up in Osnabrück, Germany, in the 1960s, when her favorite author was Astrid Lindgren, who wrote Pippi Longstocking. By her teenage years, she had dived into the more serious literature of German writers such as Günter Grass and Christa Wolf. In the late ’70s, she spent a year at an American high school, an experience that would shape the rest of her life. She became fluent in English and learned to appreciate the openness and diversity of American culture. After reading Margaret Mitchell’s Gone with the Wind in English, she knew she was proficient and felt she had “arrived.”

Gerstenberger completed her undergraduate work in German literature and history in Berlin, returned to the U.S. in the ’80s for graduate school at Cornell University, and then taught at the University of Cincinnati for almost 20 years. In 2012, she joined the U in her role as department chair and as a professor of German. She is the author of Writing the New Berlin, a book on Berlin literature after the fall of the Wall in 1989, and is in the early stages of writing a book on issues of climate change in works of literature.

Here, a snapshot of some of her recommended reads.

WHAT HAVE YOU READ LATELY?

I recently finished Colson Whitehead’s The Underground Railroad. This deeply moving novel follows the story of two slaves from Georgia as they escape to the North using real trains and actual tunnels. To me, fiction is a very powerful way of conveying historical reality, and this book, which takes literally the metaphor of the Underground Railroad, is a great example of that.

WHAT IS ONE BOOK YOU THINK EVERY STUDENT SHOULD READ?

The Metamorphosis by Franz Kafka, his famous story about a young man who one morning wakes up and finds himself transformed into a giant insect, challenges one’s mind to enter into a very different and utterly strange world. Yet it also says something about life in Eastern Europe at the verge of World War I. And you are allowed to use the word “Kafkaesque” after you have read it. Truly important to me is that students read literary fiction at all, because it stimulates the imagination and invites us into rich alternate universes.

WHAT IS YOUR FAVORITE BOOK OF ALL TIME?

German Nobel Prize-winner Thomas Mann’s Buddenbrooks tells the story of four generations of a German family from the early to the late 19th century. The characters are fascinating. Mann’s style is sophisticated yet also accessible and entertaining. It was the first big (500-page!) novel I ever read, and that sense of pride and enjoyment is still with me.

CAN YOU QUOTE A LINE FROM ANY BOOK YOU'VE READ?

Like many Germans, I can quote lines from Johann Wolfgang von Goethe’s Faust, which is still the most famous book in the German language. One of my favorite lines is “Wer immer strebend sich bemüht, den können wir erlösen,” which means something like “Those who strive continually may be redeemed by the gods.” Perseverance is one of the characteristics I value most. This line cautions us that even after a life of perseverance, it is up to the gods whether we will be redeemed. I like the reminder that we ultimately do not have control over our fate.