The U’s College of Nursing has evolved to become one of the best in the nation. 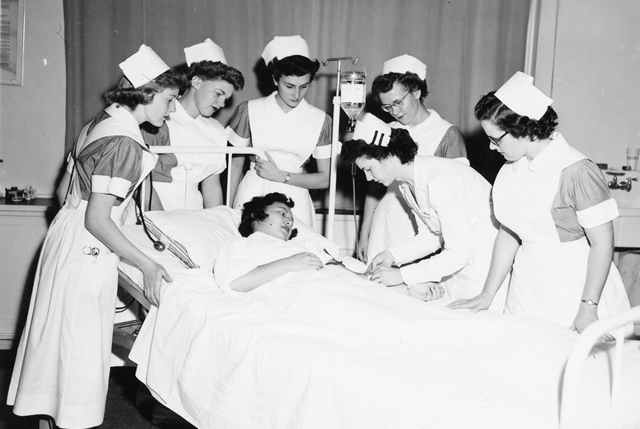 Nursing students and instructor, circa 1954

Even though the University of Utah’s medical school was established as early as 1905, a College of Nursing didn’t appear until many years later. Those interested in pursuing a nursing career (at the time, almost exclusively women) could take various basic classes at the U, and Perry Snow, the dean of the Medical School, noted in a 1916 article in The Daily Utah Chronicle that “efforts are being made to establish co-operation between the medical school and the local hospitals in order that University women will be able to study the fundamental branches of trained nursing here.” However, the idea failed to gain much traction, and no such agreements were promptly reached. Impetus came in the form of America’s entry into World War I in 1917 and the worldwide influenza epidemic that began shortly thereafter. In 1919, funding for nurse training was offered by the federal government, and a Department of Hygiene, Sanitation, and Nursing was established at the U. By 1920, there were 61 students, and a Chronicle headline announced, “Charming Nurses Will Be Trained at University.” U of U President George Thomas championed a nursing college, but the effort stalled when federal funding ended. Eventually, an agreement was reached with LDS Hospital and Salt Lake General Hospital to help student nurses gain practical experience. It took another worldwide conflagration—the Second World War—to revive the idea of establishing a College of Nursing at the U. In 1941, a Department of Nursing Education was formed, and the next year, with the U.S. fully committed to the fighting, demand for nurses skyrocketed. That year the University created courses that could lead to a bachelor of science degree in nursing education. By 1944, there was a Student Nurses Club on campus, and the U.S. Public Health Service was subsidizing nursing education at four local hospitals. These programs were so successful that in May 1948, President A. Ray Olpin recommended that a separate College of Nursing be established. The first dean was Hazelle Baird Macquin, who had been head of the Department of Nursing Education, and the new school was housed in a temporary building at Fort Douglas. By 1965, the College of Nursing had 32 full-time faculty and was offering master’s degrees in maternal care, pediatrics, and other specialized subjects. Finally, on November 1, 1969, the new University College of Nursing Building was opened, giving the nurses their own permanent home. Today the U’s College of Nursing graduates more than 200 registered nurses per year (including numerous men—25 percent of those receiving a bachelor’s in 2009-10 alone), and it is recognized around the world as one of the leading schools in the profession.