Spring Awards honor former U football player Steve Smith, a U advisor, and a U alum.

Former University of Utah student and current NFL star Steve Smith ex’01 has focused on giving time and attention to worthy causes in recent years. For that, and his athletics accomplishments, the U Alumni Association honored him with its Par Excellence Award at its 2013 Spring Awards Banquet.

Smith, who has played for the NFL’s Carolina Panthers for the past 12 years, received the award in April. The Alumni Association’s Young Alumni Board presents the award annually to a former student who attended the U within the last 15 years, in recognition of his or her outstanding professional achievements and service to the community as well as the University of Utah.

Smith grew up in Los Angeles and was raised in a single-parent home by his mother. He was forced to grow up quickly, and he looked to sports as an outlet and a way to have a different kind of future. He started playing football in middle school, where he played baseball and ran track, as well. In high school, he began to focus on football.

He attended Santa Monica College, drawing attention from universities in surrounding states. He took his first college recruiting trip to the University of Utah and soon committed to coming to the U.

He met his wife, Angie, during his first year at the U, and they were married during the bye week in October of 2000. The following April, he was drafted in the third round to the Carolina Panthers. He started his rookie season as a punt/kickoff returner, and over the years, has become one of the best wide receivers in franchise history. He helped the Panthers to the Super Bowl in 2003, and in 2011, he was elected to his fifth Pro Bowl.

Smith is a dedicated husband and father. He also has enjoyed helping good causes. Early in his career, he created a coat drive in Charlotte, North Carolina, for the less fortunate. Following the movie theater shooting in Aurora, Colorado, he made a substantial contribution to the victims to cover their medical expenses. And in the spring of 2012, he became an NFL Ambassador for Samaritan’s Feet, a nonprofit group based in Charlotte that is dedicated to serving people all over the world through washing their feet and giving them a new pair of socks and shoes. He has taken several mission trips with them, participated in shoe drives, and represented the group by speaking at schools and churches. He also showed his commitment to the group by taking off his cleats at the end of each game this past season and walking barefoot into the locker room.

Smith recently took a trip to China with another nonprofit group, visiting orphanages and conducting football clinics for children. Following that trip, he went on a USO tour to Afghanistan, where he spent time with U.S. troops. “He has a huge heart and shows it by giving of his time and resources to countless people,” says Angie Smith.

His generosity continued at the Spring Awards Banquet: He announced that he is donating $150,000 to endow a scholarship fund to help disadvantaged students attend the University. 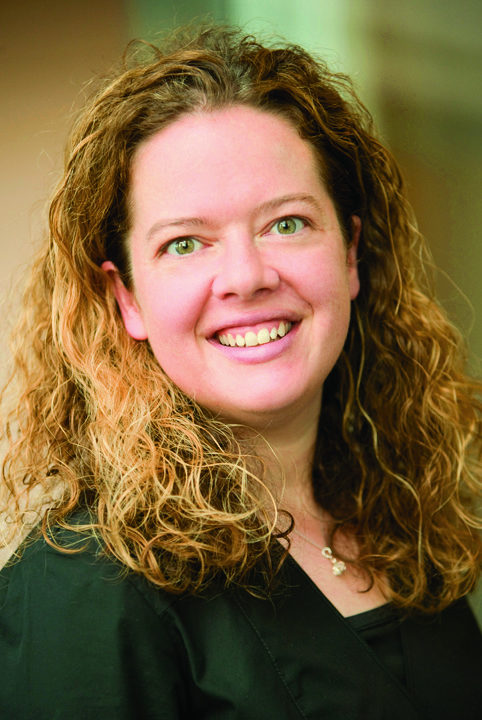 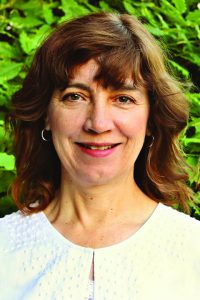 Pratt has worked in University College Advising since 2003 and was part of the leadership team that developed the Transfer Center. In her job as director, she has developed and coordinated advising services for transfer students at the U. She began her career at the U in the late 1980s, as an instructor and then as an advisor with the Center for Academic Advising. As the Transfer Center’s director, she also has worked on U initiatives for international students and has traveled annually to China for the past four years, to help promote the U to students there. “She is an outstanding advisor who focuses on the needs of each student and addresses some of the most challenging advising situations presented at University College,” says Sharon Aiken-Wisniewski, assistant vice president for Undergraduate Studies and University College.

Briggs served as vice president of the Young Alumni Board and is currently chair of the U’s Business Alumni Association. Over the years, she has been a strong supporter of the Young Alumni Board’s Homecoming 5K race. She also was named as one of the “30 Women to Watch” by Utah Business magazine in 2009 and was the recipient of the Woman of Courage Award from the American Woman’s Society of Certified Public Accountants in 2012. She is currently a tax director at PricewaterhouseCoopers. Four years ago, she was diagnosed with brain cancer and is now recovering from her third surgery and undergoing radiation treatment. In each case, she has had to strive to recover and regain her skills. Despite all that, in May 2012, after months of training, she ran in the TriUtah Women of Steel Triathlon. 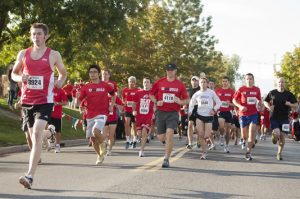 The University of Utah Alumni Association’s Young Alumni Board won a Council for Advancement and Support of Education (CASE) Award of Excellence for outstanding alumni programming at the annual CASE District VII Conference in San Francisco in March. The “bronze” award was given for their successful efforts in putting together the Young Alumni 5K Run and KidsK on Homecoming Day.

The 5K race last year had 600-plus runners and raised more than $37,000 in scholarship money for University of Utah students, says Tim Conde BA’00 JD’04, the Young Alumni Board president. Work for the annual race begins in May each year, and the 20-plus members of the board meet during the summer to plan details of the race.

The CASE District VII awards recognize efforts by colleges and universities in the Western region of the United States. “We received a record number of entries this year, and your excellent achievement stood out among the best,” the judges wrote in notifying the U Alumni Association about the award for the 5K event.

The 2013 Homecoming 5K Run and KidsK will be held on September 14. Save the date, and be sure to sign up to run and help raise scholarship funds. 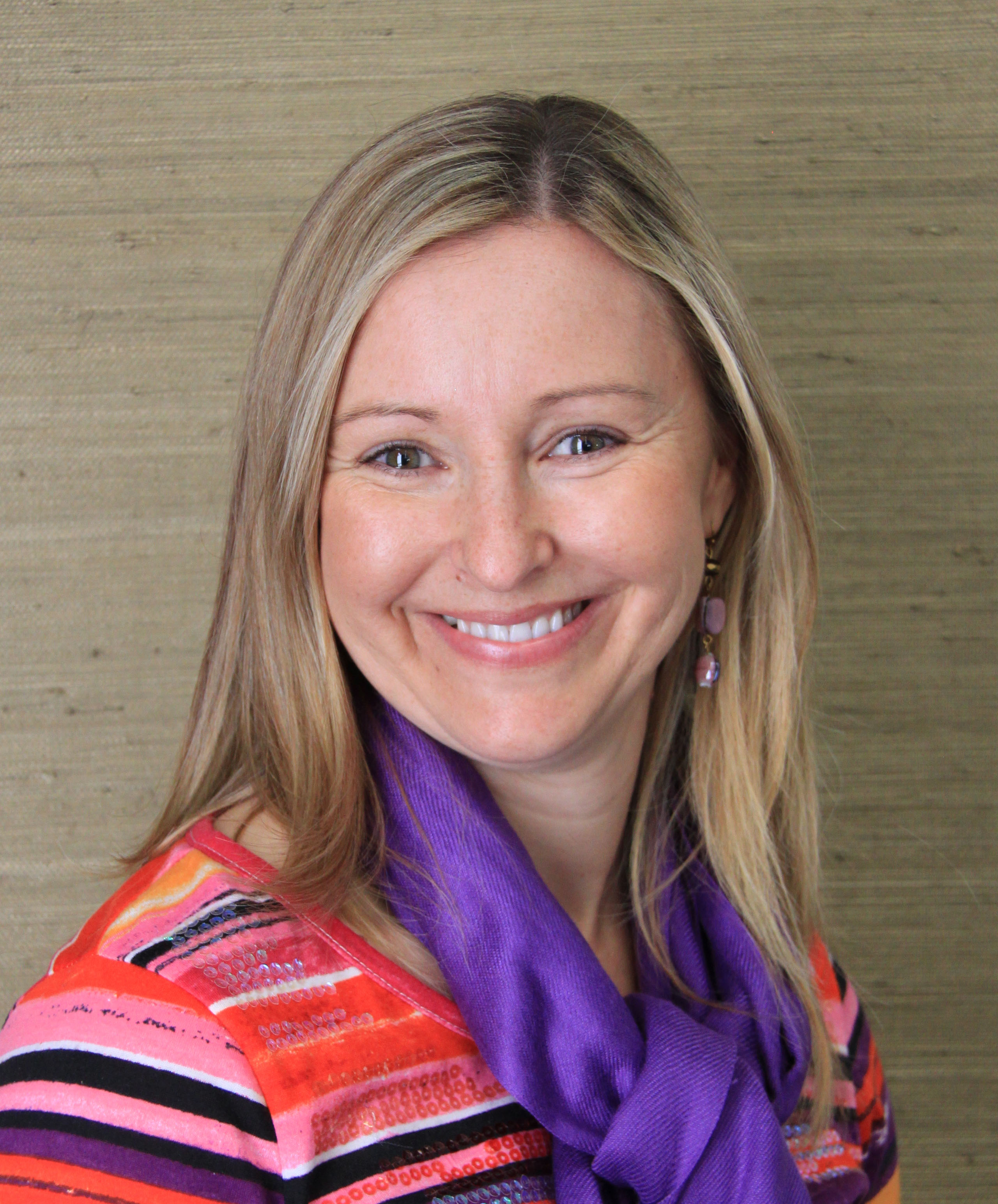 In her new role, she will continue to forge connections with international alumni and help them organize alumni clubs and events. “The University of Utah now has thousands of its alumni throughout the world,” says John Ashton BS’66 JD’69, the Alumni Association’s executive director. “We are very pleased to have Nelly join our staff to assist the Alumni Association in serving and engaging this important group of our alumni and supporters.” Divricean says that her goals include establishing a worldwide alumni network by maintaining strong relationships between the U and international alumni, as well as domestic alumni living abroad. She also aims to foster opportunities for international alumni to help the U recruit high-achieving international students and provide internships and study-abroad experiences. Her work also includes connecting international and domestic alumni living abroad with Utah businesses.

The U currently has more than 4,500 international graduates and seven international clubs, in Europe, South Korea, China, India, Taiwan, Thailand, and, as of this past May, Turkey. Alumni in 21 countries also have agreed to serve as international contacts to help the U and provide a network for its graduates. 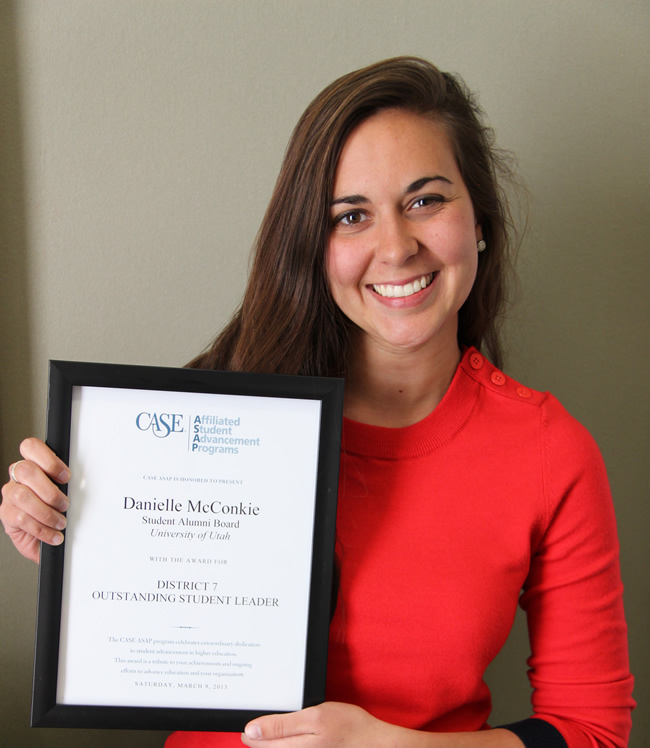 Danielle McConkie, president of the University of Utah Alumni Association’s Student Alumni Board, received the Outstanding Student Leader Award this past March at the District 7 Western regional conference of the Affiliated Student Advancement Programs of the Council for Advancement and Support of Education (CASE).

McConkie graduated this spring with a bachelor’s degree in political science. The Student Alumni Board is involved in a wide range of events and programs, including the Unrivaled Rivalry Food Drive, the U Book traditions book, Senior Sendoff, Homecoming, and Founders Day.

“The experiences I have had on the Student Alumni Board have shaped my time at the University of Utah,” says McConkie. “[Being on the board] has given me the opportunity to develop my leadership qualities and really serve my board members, students on campus, and the greater community.”

As the winner of the regional award, McConkie is eligible for a national award in the same category from CASE. The national awards will be announced at the group’s convention in New Orleans in August.