The U Alumni Association awards $400,000 annually in scholarships.

Scholarship applications are available on the Alumni Association webpage, www.alumni.utah.edu/scholarships/, and most will be due in early February. Applications for the Founders Day Scholarship are due the following November.

Several committees made up of members of the various Alumni Association boards are given the task to select the scholarship recipients every year. Committee members spend hours reading hundreds of applications from well-qualified students. While this is a difficult task, it is very rewarding when they know that the money given helps to relieve the financial burden of paying for the ever-increasing costs of tuition.

The Alumni Association awards the full-tuition, $6,000 scholarship annually to recognize students who have overcome difficult life circumstances or challenges and who have given service to the University and the community. Cardon is a U student and gunnery sergeant in the U.S. Marine Corps who has served five deployments, including two tours in Iraq.

Scholarship winners honored at the Spring Awards Banquet included 13 other Founders Day applicants who were selected to receive the Achievement Scholarship, which is $4,000. The committee also awarded 11 Campus Involvement Scholarships to students who have been exceptionally engaged in campus activities, in addition to their studies, while maintaining good grades; 11 Legacy Scholarships to students who have parents or grandparents who attended the U; six scholarships to nonresident incoming freshmen; and two Marvin J. Ashton Scholarships, to a graduate student in the Humanities College and one in the Business School.

The Alumni Association’s affiliate boards presented scholarships this year, as well. The Emeritus Alumni Board awarded $5,000 each to six students at Salt Lake City’s Bryant Middle School who participate in the board’s tutoring program. Most of the students are refugees who have fled hardship and political strife in their home countries, and they will be the first in their families to attend college.

Funds for scholarships are available thanks to donations from and participation in events by generous alumni. The purchase of University of Utah license plates for vehicles is the greatest source of funds for scholarships. The Young Alumni Scholarship 5K, held every year in conjunction with Homecoming, is another big source of scholarship revenue and is a fun way for alumni and others to get involved and contribute to the Alumni Association scholarship fund.

The Alumni Association places great value on being able to award scholarships to help students achieve their academic goals. With the help of scholarship money, students are given the opportunity to improve themselves and the University. Tate Matta, recipient of the Marvin J. Ashton Scholarship, says, “The money generously awarded through the scholarship will provide an incredible opportunity for me to further my career goals while increasing my ability to positively impact lives around me. I hope to build my own legacy of service and compassion throughout my career while continually supporting the University.”

—Cassie Taylor is a program coordinator for the University of Utah Alumni Association.

The University of Utah Alumni Association will present the 2013 Founders Day scholarship winner in February and will honor four outstanding graduates of the U and one honorary alumnus with 2013 Founders Day awards. A Founders Day Banquet will be held in their honor on February 28 at the Little America Hotel. Go to www.alumni.utah.edu for more information and to register, if you’d like to attend. 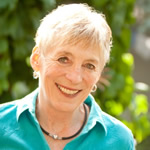 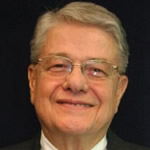 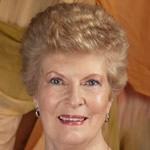 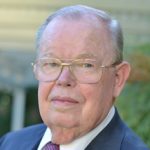 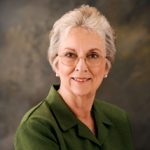 The University of Utah Emeritus Alumni Board honored five alumni in November with its 2012 Merit of Honor Awards. The annual awards recognize U alumni who graduated 40 or more years ago and whose careers have been marked by outstanding service to the University, their professions, and their communities.This year’s winners are Daryl Cameron Barrett BS’67, Kim R. Burningham BS’60, Loabelle “Loa” Black Mangelson-Clawson BS’59 MFA’68, Bryant W. Rossiter BA’54 PhD’57, and JoAnn B. Seghini BS’58 MEd’73 PhD’79. The Emeritus Alumni Board hosted a Merit of Honor Awards Banquet for them on November 7 at Rice- Eccles Stadium and Tower.

Barrett has spent many years as a community volunteer for child advocacy and education, serving on community boards and committees including the University of Utah Alumni Association; Junior League of Salt Lake City; Utah Children; Zoo, Arts & Parks; and Planned Parenthood Association of Utah. She was also elected to a term on the Utah State Board of Education and was appointed to the Utah State Board of Regents. With her sister-in- law, Barrett co-authored “You’re In Charge,” an innovative child-abuse prevention program for elementary-aged children that gained national recognition. She has been recognized with honors including a National Association of Child Advocates Volunteer Award.

Burningham (who also holds a master’s degree from the University of Arizona and an MFA from the University of Southern California) served as a member of the Utah House of Representatives for 15 years and has been a well-respected teacher of speech, debate, and drama at Bountiful High School for 27 years. He was a member of the Utah State Board of Education for more than a decade, chairing the board for six years. He has also been a consultant in professional writing and presenting for Shipley Associates and Franklin Covey for 20 years and directs the Bountiful Community School. He has been recognized with honors including the Utah PTA Friend of Children Award and a Legislative Leadership Award.

Mangelson-Clawson is a legend in Utah dance. Now University of Utah professor emerita, she studied with eminent dancers including Martha Graham, Willam Christensen, and Alwin Nikolais. Mangelson-Clawson was a charter member of Repertory Dance Theatre and also danced for Ririe-Woodbury Dance Company, and her choreographed works have been performed by both companies. In 1978, she formed and became artistic director of Performing Danscompany, a student company. She has directed hundreds of dance productions and directed and produced two award-winning films on dance. She has also written articles on dance history and technique, and she created and performed a 90-minute one-woman show about Isadora Duncan, later produced as a video by KUED.

Rossiter spent many years conducting scientific studies with the Eastman Kodak Research Laboratories, becoming director of the Chemistry Division and later director of Science and Technology Development, through which he helped form a new venture between Eastman Kodak and ICN Pharmaceuticals, Inc. that led to pioneering efforts to develop broadspectrum antiviral drugs. One drug, Ribavirin, was eventually approved worldwide for the treatment of respiratory syncytial virus, hepatitis C, and a number of other viral diseases. Rossiter is senior editor of Physical Methods of Chemistry, a 23-volume treatise found in many libraries and scientific institutions throughout the world.

Seghini, now in her fourth term as mayor of Midvale, Utah, dedicated 36 years to the Jordan School District. She taught K through sixth grades for 12 years and then was an administrator for 24 more, retiring as assistant superintendent of curriculum and staff development. She also spent more than a decade as an adjunct faculty member with both Utah State University and the University of Utah, and was co-chair of the Brigham Young University-Public School Gifted/Talented Task Force. Her contributions to community and professional boards and committees include currently serving on the Board of Trustees of the Itineris Charter School and as chair of the Salt Lake County Human Services Committee. 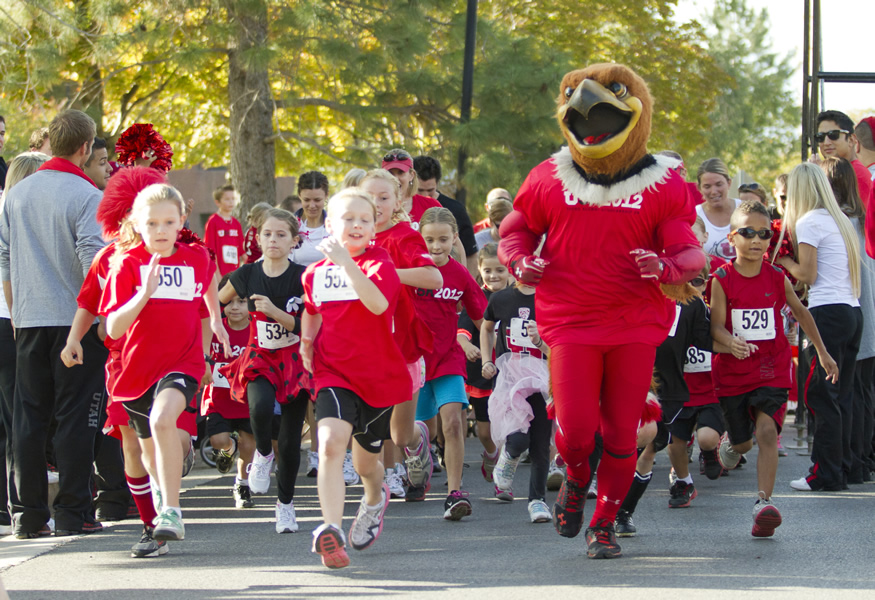 The University of Utah Alumni Association raised about $60,000 for U scholarships for deserving students through its fundraising events during Homecoming week. 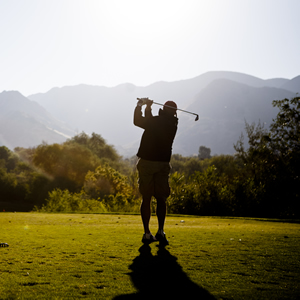 A golfer makes a swing in the Scholarship Scramble tournament

Homecoming began Saturday, September 8, when scores of volunteers turned out to participate in the Legacy of Lowell Community Service Day. The following Tuesday, campus groups decorated their areas to reflect this year’s Homecoming theme, “Red, White and U.” The U’s emeritus alumni—those who graduated 40 or more years ago—gathered for their Homecoming reunion later Tuesday afternoon, with tours of the Natural History Museum of Utah followed by a reception and dinner there featuring museum director Sarah B. George as the guest speaker.

Fraternity and sorority members competed in song and dance at Songfest on Thursday. Students and alumni then gathered for a pep rally at the Union Building on Thursday night. Friday began with the U Alumni Association hosting the Homecoming Scholarship Scramble, a golf tournament at Bonneville Golf Course. Under the leadership of this year’s tournament chairman, Keith Wallace BS’72, the golf tourney netted approximately $30,000 for U scholarships, about 50 percent more than last year. Friday night, students gathered for the annual Homecoming dance, held at The Depot at The Gateway shopping center in Salt Lake City.

The Young Alumni 5K and KidsK on Saturday morning, September 15, also raised about $30,000 for U scholarships. The crowds headed in the direction of Rice-Eccles Stadium in the afternoon for the Alumni Association’s pre-game tailgate party on Guardsman Way and then watched the Utes triumph over Brigham Young University, with a score of 24-21. 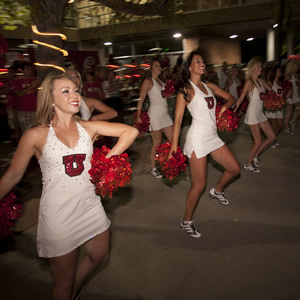 U cheerleaders dance at the Crimson Rally 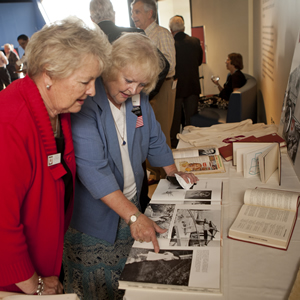 alumni look at old yearbooks during the Emeritus Alumni Reunion 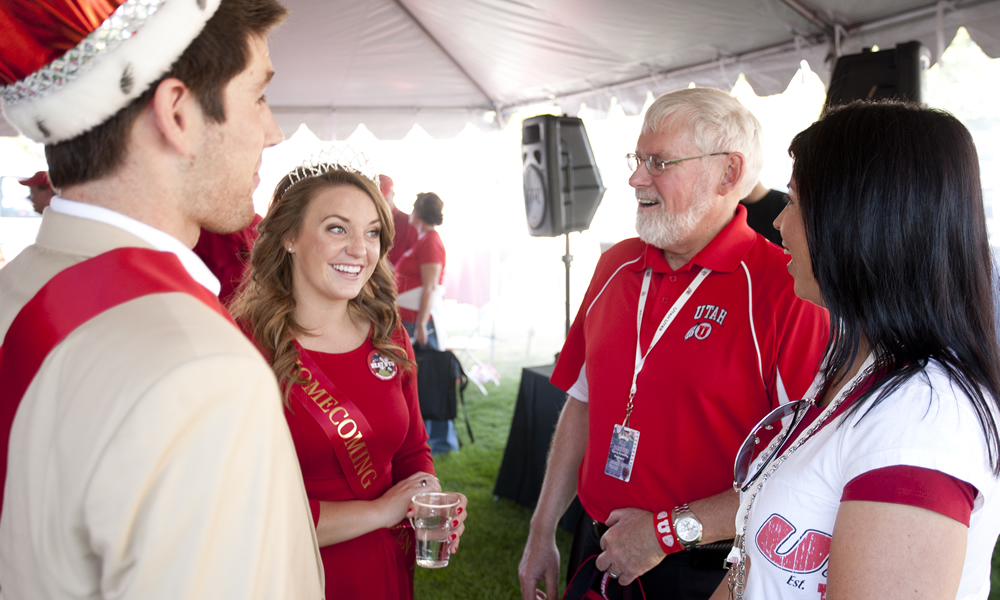