The accomplishments of five outstanding graduates of the University of Utah and one honorary alumnus were recognized with 2014 Founders Day awards in February.

Award-winning journalist and foreign-policy expert Frederick Kempe BA’76; real estate and higher education leader Kem Gardner BS’67 JD’70; stock fund manager Donald Yacktman BS’65; and Ted (BS’65) and Charlotte Garff Jacobsen (BA’64), both of whom had primary roles in development of the U’s Lowell Bennion Community Service Center, each received the Distinguished Alumnus/a Award. John Bloomberg was presented with an Honorary Alumnus Award. These awards are the highest honor the University of Utah Alumni Association gives to U graduates and friends, respectively, in recognition of their outstanding professional achievements and/or public service, as well as their support of the University.

Kempe, who after the U went on to receive a master’s degree in journalism from Columbia University, spent more than 25 years as a reporter, columnist, and editor for The Wall Street Journal. Since 2006, he has served as president and chief executive officer of the Atlantic Council, a foreign policy think tank and public policy group based in Washington, D.C. He is the author of four books, including New York Times best seller BERLIN 1961, and is a regular media commentator in Europe and the United States, contributing to, among others, CNBC and the BBC. At The Wall Street Journal, Kempe won national and international awards, including participating in two Pulitzer Prizes.

Gardner was cofounder and served as president of The Boyer Company for more than 30 years, and he has served since 2005 as chairman of The Gardner Company, a private commercial real estate firm. He has helped develop major corporate, residential, and retail facilities, including the Myriad Genetics corporate campus and The Gateway shopping mall. A former chair of the Utah State Board of Regents, he remains active in higher education, serving on the U’s National Advisory Council. He and his wife, Carolyn, have given significantly to the U, including support for the Honors College and its engaged learning initiative, and annual support of the J.D. Williams scholarship endowment.

The Jacobsens have given countless hours of service to the U and have financially supported many U entities for decades. Ted, who after his bachelor’s degree went on to a master’s of science degree from Stanford University, headed Jacobsen Construction for 30 years, helping create buildings such as the Jon M. Huntsman Center, the Warnock Engineering Building, and The Grand America Hotel, as well as Mormon temples throughout the western hemisphere. Charlotte’s service to the U includes membership on the U’s National Advisory Council. Ted is the immediate past chair of the U College of Engineering’s National Advisory Council.

Bloomberg (BS’57, Amherst College; MBA’62, Harvard University) is a former Wall Street research analyst and competitive skier. After his vision began rapidly deteriorating, he was introduced to Dr. Randall J. Olson with the University of Utah’s Department of Ophthalmology and John A. Moran Eye Center. In gratitude for surgery by Olson that Bloomberg has credited with saving his vision, Bloomberg and his wife, Toni, began generously contributing funds and art to the Moran Eye Center. The John and Toni Bloomberg Ophthalmology Library at the eye center is named in their honor. He has served on the Department of Ophthalmology Advisory Board, the College of Science Advisory Board, the College of Fine Arts Advisory Board, and the President’s Club Committee.

Juliet Louise Kanyana, a University of Utah premedical student majoring in Health, Society and Policy, has been selected to receive the 2014 Founders Day Scholarship. Kanyana, who is originally from the Democratic Republic of Congo, came to the United States as a refugee with her family in 2011. After finishing a year of high school in Salt Lake City, she went on to the University, where she is now a sophomore. Her aim is to become a physician and eventually return to Africa to help people there who don’t have access to quality medical care.

The University of Utah Alumni Association awards the $6,000 Founders Day Scholarship annually to students who have overcome difficult life circumstances or challenges and who have given service to the University and the community.

Kanyana was four years old when militants attacked her village in the Democratic Republic of Congo, and amid the bloodshed and chaos, she and her family were forced to flee. They eventually reached a refugee settlement in Uganda in 1998, when she was five years old. While still a child, she was forced to work as a laborer to survive. “Though I was still young, I remained strong and committed myself to my study, so that I can have a better future and help others,” she says.

As a teenager, she attended a boarding school that was several hours away from the refugee settlement. Most girls in the refugee camp dropped out of school after primary school because their families believed they would get married and didn’t need much education, and some girls were forced into early marriage. Kanyana was able to attend secondary school because the leaders of the nonprofit group COBURWAS—founded by young refugees from the Democratic Republic of Congo, Rwanda, and Sudan— helped convince her parents of the importance of educating a girl.

In April 2011, Kanyana, her parents, and her eight brothers were resettled in Salt Lake City. She enrolled at the University of Utah in 2012. Kanyana maintains good grades while also being involved in student groups on campus, including the Alpha Epsilon Delta Premedical Honor Society and the Association of Future Female Physicians, and she is vice president of the African Student Union.

Dozens of University of Utah alumni and student volunteers helped organize and coordinate the U’s 20th annual Food Drive, which ran from November 8 to 30, and the final results are in: Utah supporters generously donated more than $51,000 and a record 433,346 pounds of food. 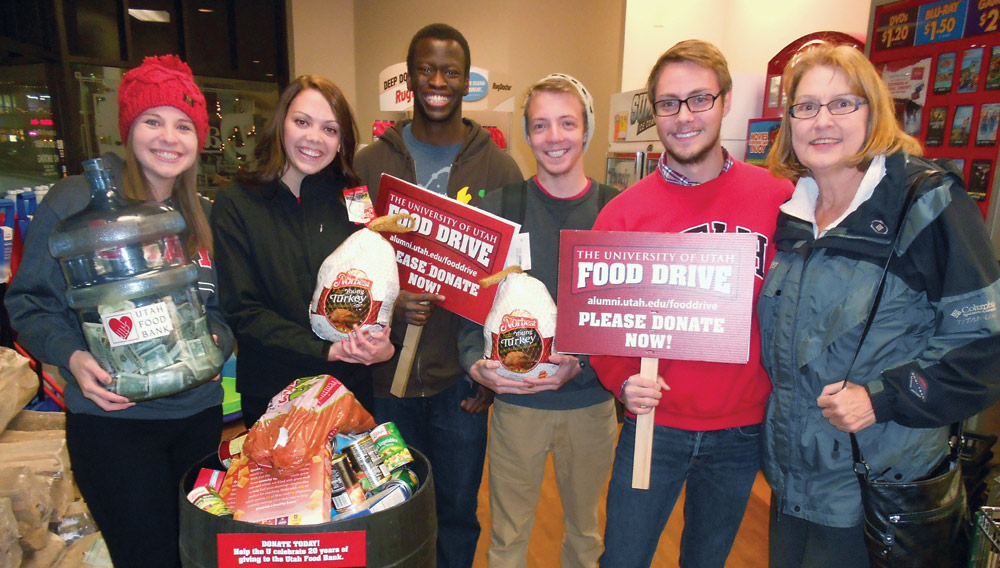 The annual Food Drive, spearheaded by the U Alumni Association and its Student Alumni Board, has grown to become a vital part of holiday efforts benefiting the Utah Food Bank. “We are thrilled to represent the University and the Alumni Association in the community on such an important program,” says Julie Barrett BS’70, chair of the Alumni Association’s Community Service Committee. “What better cause than addressing the needs of the hungry in Salt Lake. The student efforts were terrific.”

The food drive was developed 20 years ago as a friendly competition between the alumni associations of the University of Utah and Brigham Young University. The initial competition tested which school’s fans could bring more pounds of food to the football stadium. Soon the competition grew to include monetary donations. While the rivalry component no longer exists as part of the drive, each dollar donated still allows the Utah Food Bank to fulfill specific needs such as transportation and purchases of perishable food. The Utah Food Bank turns $1 of cash into the equivalent of eight pounds of food.

The U Alumni Association’s Student Alumni Board and MUSS Board members collected food and cash donations at football games and local grocery stores.

One reason for the record amount of food collected in the most recent food drive was that more than 45 local schools were recruited to join in the food drive. “We were overjoyed to observe that of the 433,346 pounds collected in this year’s record-breaking food drive, 84,204 of those pounds came from schools,” says U graduate student and Student Alumni Board member Brooke Foster BS’13.