On March 3, the University of Utah awarded its highest honors, the Founders Day awards, to four outstanding graduates and one honorary alumnus. The awardees were recognized for their exceptional professional achievements and/or public service, as well as for their support of the University.

Deneece G. Huftalin BS’84 PhD’06, president of Salt Lake Community College since 2014 (and the presidential sponsor for the Utah Women in Higher Education Network), is known as an inspirational mentor and imaginative leader with a passion for quality and accessible higher education. She has also served higher education institutions including Northwestern University, Stanford, UCLA, and the U, where she has taught since 2006. Huftalin holds a bachelor’s degree in communication from the U, a master’s degree from UCLA, and a doctorate in education, leadership, and policy from the U.

Patricia W. Jones BS’93 served 14 years in the Utah State Legislature and was the first female leader in both houses. She cofounded and served 34 years as president of Dan Jones & Associates, a well-respected public opinion and market research firm. Today she is CEO of the Women’s Leadership Institute, which aims to elevate the stature of female leadership in Utah. Her many awards include recognition from various organizations as Legislator of the Year, a Hero on the Hill, Friend of Children, and a Public Health Hero. She has a bachelor’s degree in mass communication from the U.

Harris H. Simmons BA’77 is chairman, president, and chief executive officer of Zions Bancorporation, a $56 billion asset bank holding company that operates nearly 500 full-service banking offices throughout the western United States. Simmons got his start in the industry at age 16, working as an intern for Zions Bank. He’s now spent more than 30 years with the company. Simmons shares his time and expertise with community organizations including the Utah Symphony, Pioneer Theatre Company, and Utah Youth Village. In addition to his bachelor’s degree, he holds a master’s degree in business administration from Harvard Business School.

Marion A. Willey is currently in his 21st year as executive director of Utah Non Profit Housing Corporation and is board president of the Western Region Nonprofit Housing Corporation. His efforts have benefited more than 21,000 households and helped preserve and build more than 2,200 units of affordable housing for Utah’s special needs populations and another 2,000-plus units in eight different states. He has received many awards and professional appointments ranging from the Zions Bank Community Reinvestment Act Committee and the Governor’s Blue Ribbon Committee on Affordable Housing to Salt Lake County Aging Services and Salt Lake County Board of Adjustments.

A native of Mongolia, Yudko studied mineral processing at the Mongolian University of Science and Technology before receiving a Rio Tinto Scholarship that allowed her to transfer to the U in 2012. She adapted quickly to Utah and thrived during her first three years at the U. But in January 2015, she learned her father had stage IV lung cancer. “That day changed my life,” says Yudko. “Everything turned upside down.”

Yudko arranged for her father to come from Mongolia and get treatment at the Huntsman Cancer Institute in Salt Lake City. For the next six months, she carried a full course load in a demanding major while caring for her father. “At least once a day I stepped outside just to cry,” she says. In June 2015, her father passed away.

She made sure his remains were shipped back to Mongolia and returned to help with the funeral. While there, she visited families of cancer patients in Mongolian hospitals and tried to pass on advice and hope. “Life is unpredictable, so you always have to be prepared and keep fighting,” she says.

Yudko has been determined ever since to help make a difference in cancer prevention and treatment. She recently joined an engineering research team to help develop a cancer detection sensor—a project that gives her a profound sense of meaning.

University of Utah alumni have recently gathered in far corners of the world from Brazil to California to South Korea. In January, the U hosted a dinner in São Paulo, Brazil, to reach out to U alumni in the country. The Brazil Alumni Club formed in spring 2015 to help increase the university’s connections there. The U has about 150 Brazilian alumni, and some 60 students from the country are enrolled at the University this year.

Across the world in South Korea, the U hosted another alumni dinner in January that was well attended by U alumni and friends. The U has a growing presence in the country since the U’s Asia Campus opened as part of the Incheon Global Campus in Songdo, South Korea.

Closer to home, the Bay Area alumni chapter also met that month in San Francisco for their annual planning meeting. The chapter is offering multiple scholarships with a value up to $3,500 and has openings for a vice president and board members. Other recent chapter events have included a Utah coach talk in Seattle, a social in New York, and a night at the ballpark in Arizona.

At the Helm of the Mighty MUSS 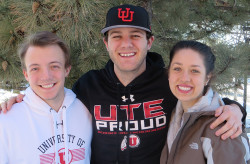 The Mighty Utah Student Section (MUSS), which is now 6,000 strong, is under new leadership as of February. The MUSS welcomed new president Daniel Rueckert (pictured center) and vice presidents Madison Estes and Nick Eixenberger, and said goodbye and thank you to former president James Gabour and vice presidents Ally Dieryck and Carter Bruett.

May 5: Commencement
Work-life thought leader Anne-Marie Slaughter will deliver this year’s commencement address. Watch the live stream or posted video on the web at utah.edu.

May 14-15: European Alumni Reunion
Network and sightsee with fellow U alumni in Trier, Germany, and Luxembourg. See if you can beat last year’s turnout of 40 alumni from eight countries.

Want to attend an alumni event in your area? Check out our complete events calendar here.