The Alumni Association recently welcomed seven new members to its Board of Directors, as well as a new board president and vice president, and new presidents of three affiliate boards. The Board of Directors consists of approximately 24 members who serve three-year terms. Members meet regularly to help support association events and other endeavors, and also serve on committees across campus and at the association ranging from legislative advocacy to scholarships to community service.

The new president of the Board of Directors is Joe Sargetakis BA’80. The owner of Frog Bench Farms in Salt Lake City, Sargetakis is committed to providing organic fruits, vegetables, herbs, and microgreens for farm-to-table restaurants in the city. He previously held vice president positions at Paine Webber and Morgan Stanley. His involvement with the U also includes membership in the Copper Club at the Natural History Museum of Utah and being a longtime member of Red Butte Garden. His other volunteer work includes serving on the boards of the Swaner Nature Preserve, Ronald McDonald House Charities, and Ducks Unlimited, and being on the founding board of the Sugar House Farmers Market. As the association’s board president, Sargetakis will also serve on the U’s Board of Trustees.

The board’s new vice president is Susan Hansen Porter BS’85 MSW’88. Porter has been a psychotherapist for more than 30 years, owning and directing her own clinical counseling practice in Salt Lake. A licensed clinical social worker and member of the National Association of Social Workers, she’s also an adjunct professor in the U’s Department of Psychiatry and a trustee for the Hospital Foundation. Her community service also extends beyond the U, as she has volunteered her time to many organizations, including the Utah Food Bank and The Road Home shelter. Sargetakis and Porter are replacing outgoing President Julie Barrett BA’70 and Vice President Scott Verhaaren BA’90 MBA’91, who made significant contributions to the university and to the Alumni Association during their tenure. Barrett also served as a member of the U's Board of Trustees. 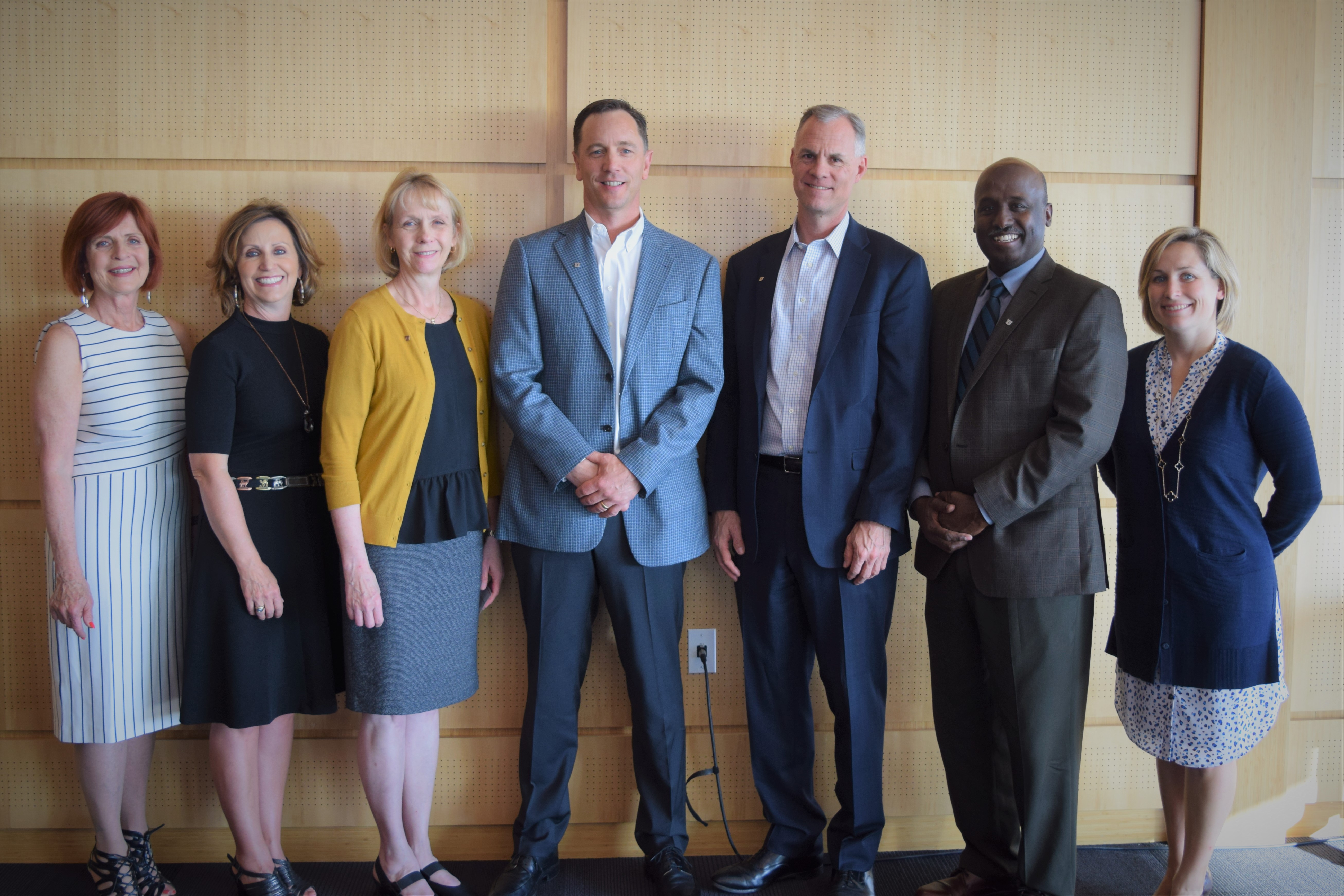 Show your stripes at Homecoming 2017 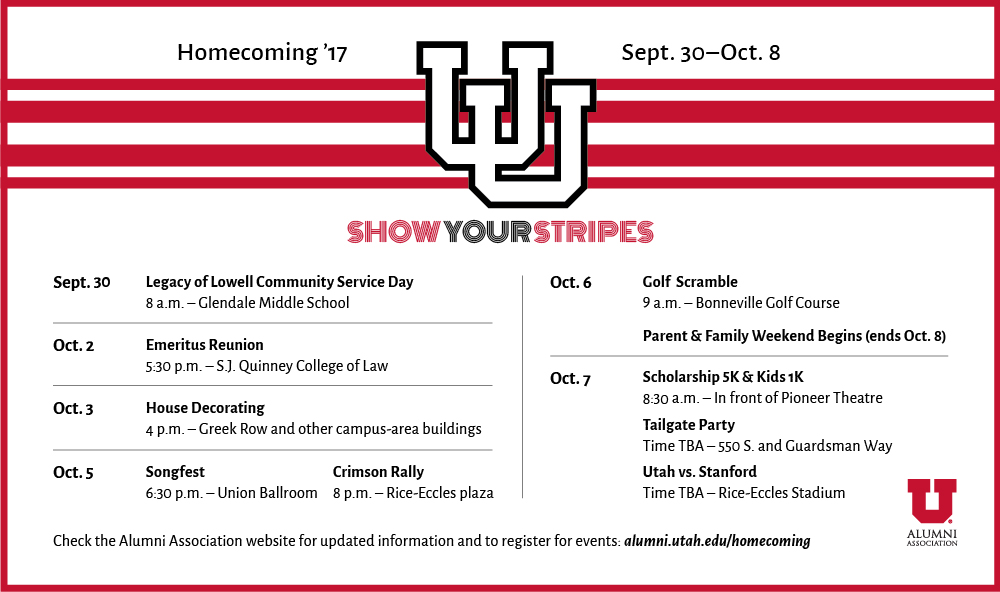 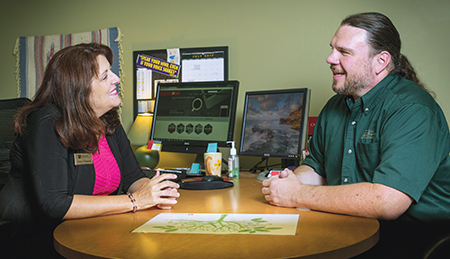 Sean O’Leary BS’93 MS’99 graduated with an advanced degree in electrical engineering, but still not without apprehension about embarking on his first full-time job hunt. Now 18 years later, he owns his own engineering business. As he reflects on the career path that got him where he is today, he says he couldn’t have done it without Alumni Career Services (ACS).

O’Leary first visited the career center after graduation in the late nineties to get help with his résumé and to practice interview techniques, both of which helped him land his first job. Twelve years later, he found himself out of work. He knew the resources at ACS were available to him, but he had to overcome his initial pride about going back for help. “I didn’t even want to talk in Job Club, I just wished I could go back to an office and do my job,” says O’Leary. “I learned you have to get outside your comfort zone.”

The U’s Job Club, which is free, gives attendees the opportunity to network, critique each other’s résumés, practice elevator pitches, and even perform mock interviews. But it also provides an emotional support group. “Having a group of people you can sit down and talk to about worries is really important. They’re dealing with the same kind of things that you are… fears, frustrations, and challenges,” says O’Leary. “It’s bonding. I still keep in contact with people I met in Job Club years ago.”

Assistance from ACS has proved to be an asset through his entire career, O’Leary says. Just over a year ago, he stepped into their offices again with the intention of starting his own business. Having worked with the previous ACS coach, Julie Swaner BA’69 PhD’11, O’Leary was concerned when he heard she had retired. And, as luck would have it, he was the very first job-seeker new coach Amy Gleason worked with in her new position. “Here I was, just terrified because I was changing everything I was doing,” says O’Leary. “But Amy was excited and pointed me in the right direction. The things that she told me to do were spot on.”

Between Swaner and Gleason, O’Leary learned about branding and marketing a company. And in July 2016, he officially became his own boss when he started Celtic Engineering Solutions. The company’s green logo with classic Celtic knots proudly highlights O’Leary’s Irish heritage. “I would definitely not be the successful business owner I am today without the repeated help of Alumni Career Services,” says O’Leary. 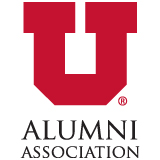 1. STAY CONNECTED: Receive each issue of the U’s award-winning Continuum magazine, along with Alumni Connection, the monthly e-newsletter filled with great alumni stories, news from campus, and updates on alumni events.

2. CONTRIBUTE TO SCHOLARSHIPS: Your membership fee helps support future alumni through our scholarship programs. Last year, the Alumni Association awarded a total of more than $700,000 to deserving students.

3. CAREER SERVICES: Members have access to career coaching, Job Club, workshops, networking events, and more (including free services for members both in-state and out) to help improve work performance or find new jobs.

4. DISCOUNTS AND OTHER SAVINGS: Save at the Campus Store and Utah Red Zone, on Continuing Ed classes, and in a variety of other areas— from 2-for-1 arts and athletics tickets to gym memberships, tailgate discounts, and more.

5. SHOW YOUR PRIDE: Attend Homecoming activities such as our tailgate, Emeritus Reunion, and Scholarship 5K at your member rate; volunteer at events along with other alums; connect with your local alumni chapter; get U swag!

One thought on “Alum News”