Christine Walker BA’82 MFA’86 is a producer in the new world of #MeToo and Hollywood taking major steps to ensure that female voices are heard and women are paid equally to men. She also runs the Provincetown Film Festival in Massachusetts and hosts the town’s annual Women’s Media Summit.

When Walker was in her graduate film studies program at the University of Utah, she was the only female student. “Being the only woman in the film department made a difference. I became much more aware of the lack of women directors,” says Walker, speaking from her home back East during a threatening Nor’easter. “Gender equity in film has become a bigger issue to me, as has the impact of the lack of gender equity in storytelling.” 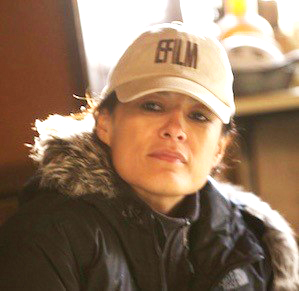 Walker on the set of Darling Companion directed by Lawrence Kasdan. Photo by Wilson Webb Photo

Walker describes the job of a producer as being able to do pretty much every job on a film set, for a short period of time, then handing each off to someone who can do the job better and longer than you. And as a woman in the role, she feels compelled to wear yet another hat: activist.

As she walked onto her first professional set, with dozens of actors and crew under her supervision, Walker’s male cinematographer started to scream at the female line producer. Tensions were high, and everybody was looking to a higher-up to solve the problem. Walker says that in that moment, she froze and briefly walked away. “I was thinking—what do I do? And then I realized: I’m the producer of the film. If I can’t step in, who is going to do it? That was a huge moment for me in accepting my responsibility and whatever power I had to make a difference.”

She went back to the set, threatened to fire the cinematographer if he wasn’t respectful, and continued on to a 20-year career of many independent features, one of which she wrote herself. “I wasn’t intimidated at all,” recalls Walker with a laugh. “I’m probably more intimidated now, having gone through that experience. I certainly developed a new and greater appreciation for the writing process and for screenwriters. One of the things I learned a lot about at the University of Utah was the importance of story structure.”

Her classes included the study of classic Hollywood films by the likes of John Ford and Alfred Hitchcock. And she believes that education is the basis for much of her success. With a foundation in the greats, she was able to experiment. “Unless you understand the classical structure—and it’s not Hollywood, it’s like, Aristotle,” Walker emphasizes. “Unless you really understand those rules of storytelling, you can’t break them.”

That’s her biggest piece of advice for filmmakers of any age and stage—do your homework. “I’m always surprised by how many people who work in the industry don’t watch movies,” Walker says incredulously. “And not just American cinema, but Kurosawa or Wadjda. You’ve got to see that, or you know nothing about films!”

But it also requires some fearlessness. Inspired by another Christine, producer Christine Vachon, Walker learned to never back down. Taking on projects that might not seem like a natural fit, and getting out of her comfort zone, has been good for her.

One of her favorite films she’s worked on was 2005’s Factotum, starring Marisa Tomei and Matt Dillon, and based on a book by Charles Bukowski. It’s about a hard-drinking, drifting writer type, a departure for Walker. “I grew up in conservative Salt Lake City, and to make a film about a person who is a professional drinker and that’s not a problem, and not even addressed as a moral issue or anything else, was kind of freeing for me,” Walker says.

Now, she says the time has come to be a part of the movement to bring greater equality and respect to women working in film. “We’re at a watershed moment, and it’s a great time to bring these ideas and work with other groups, but there’s so much more to be done,” Walker says.