English Professor François Camoin prepares for the conclusion of the teaching part of his decadeslong vocation. 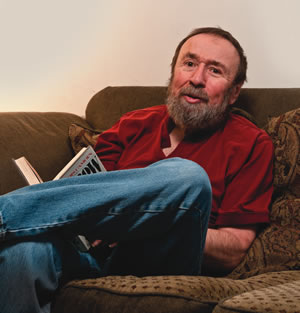 François Camoin, an institution in the University of Utah’s English Department and the founder of its prestigious MFA program in creative writing, is preparing to retire. After more than 30 years at the U, he will exit the classroom for the last time at the end of Spring Semester 2012.  In a way, the timing is propitious. This past year was tough for the 71-year-old Camoin: In March 2010, he suffered a stroke, from which he is still recovering, and the following November, his beloved younger sister, Daniéle, passed away. Although a bit subdued these days, Camoin remains very much the admired teacher and author who has nudged and inspired generations of graduate and undergraduate students to resist the urge to trivialize their work, and instead focus on “writing about things that matter.”

Camoin came to the U in 1978. He has sometimes claimed that in those less-formal times, his “interview” consisted of a game of eight ball in a now-defunct dive bar followed by a job offer from the department chair, which the two men sealed with a handshake.  Apocryphal or not, the story reflects Camoin’s unconventional approach to life, if not to teaching. The author of eight books of fiction and nonfiction, Camoin has garnered numerous accolades during his long career, including the Flannery O’Connor Award for Short Fiction, the Associated Writing Program’s Award for Fiction, the Salt Lake City Mayor’s Award in the Arts, and the Writers at Work Writers Advocate Award. His work has appeared in Playboy, Mid-American Review, Missouri Review, and Nimrod, among other publications. His most recent short-story collection, the evocatively titled April, May, and So On, is considered among his best. Critic and fellow teacher Steve Almond describes the language in the book as “bristl[ing] with the supple dynamism of Bellow, the jazzy patter of Elkin.”

A native of Nice, France, Camoin emigrated to the U.S. in 1951, when his mother married an American serviceman and moved to Brookline, Mass. Following undergraduate and master’s degrees at the University of Arizona, he received a doctorate in Jacobean drama at the University of Massachusetts in 1967 and proceeded to teach for a few years, the first at Slippery Rock State College (now university) in Pennsylvania, then a handful at Denison University, before his innate restlessness and the “intolerable character of Ohio,” as he once put it, inspired him to flee the Midwest in an old red Ford truck with everything he owned stacked in the bed or strapped to the roof. For the next few years, he shunned academia, working as a carpenter, organic farmer, apartment manager, and door-to-door encyclopedia salesman. During this period, he began developing his idiosyncratic, immediately identifiable prose style, although he discovered his calling as a writer while still teaching in Ohio.

“I was on the academic track, trying to write a paper about Mark Twain,” Camoin recalls. “And I realized that, as much as I loved teaching, I didn’t want to write academic papers. I was, at heart, a fiction writer.”

But the process of honing his writing required the unlearning of long-held preconceptions about storytelling. “The best advice about writing I ever got was from Bob Flannigan, who used to teach at Wesleyan, who told me to turn off the projector at the back of my head and stop describing what my characters were doing,” Camoin says. “That was unbelievably valuable.”

Valuable indeed. Over the years, Camoin has developed a broad appreciation for a wide variety of literary conventions and genres. (“Half the time I don’t know what my students are trying to do, and I’m fine with that,” he avers). He also became convinced that good writing is less about storytelling than words. “I never think of it as telling a story,” he insists. “I think of it as building things out of words. Writers who insist that it’s all about storytelling are sort of sanctimonious—like the voice of God. A friend of mine used to say it was like talking through a garden hose.”

Camoin lists Stanley Elkin, Saul Bellow, and his former student Darryl Spencer among his favorite writers. “They use words to make things and not to describe things,” he continues. “They organize their writing using musical principles, like themes and point/counterpoint. I don’t think meaning is the best way to relate to a text. You wrestle with it. You pay attention to the way the words affect you. It’s like falling in love—you don’t say, ‘Oh dear, I understand you’; instead, you say, ‘I love you.’ You know?”

“I used to think of myself as a writer who taught; now I think of myself as a teacher who writes. It’s a recent development,” Camoin says. “These days, I care more about my students’ accomplishments than my own. I’m not being virtuous, I’m just not concerned with publishing or selling books right now.”

After retiring, Camoin says he will miss the students “like crazy.” “I’ll miss the conversations and the opportunity to read their work. But everything has got a time and place, and it’s time for me to do something else.”

As to how he’ll fill his days at his home in Salt Lake’s Avenues neighborhood, a place that he describes as “offering a view 50 miles right down the center of the valley in the direction of Provo,” he confesses that his plans are still in flux. “I have no idea. It’s like stepping into a different world. For all I know, I’ll lie in bed and read romance novels.”

The last prediction seems unlikely, in part because following the death of his sister Daniéle, Camoin recently assumed the role of executive director of the Jarvis and Constance Doctorow Family Foundation, which provides grants to arts organizations and supports mental health research. “It’s a hell of a lot of responsibility,” he says, “and I’m still trying to deal with that.”

After his stroke, Camoin was left unable to drive or read small print. He credits Shelley, his wife of almost 20 years, for providing him with the necessary support and love to ensure his recovery. And, he notes, “She went back for her MFA in January. She’s a very good writer.”

Camoin himself is at work on a new book, a series of interrelated stories that he says may become a novel. “They’re language stories. I play with language and the voice of an old guy, maybe 60 or 70 years old. But I’m more interested in language than in what he observes. I’ve got about five stories done and am going to go for 12.”

Meantime, he will finish his final three semesters at the U, a place he says has been good to him. “I’ve mostly gotten along with my colleagues, and I have always loved the students,” he says, with a touch of regret.

—Barry Scholl BA’86 MFA’91 JD’05 collaborated with Camoin on two books, Utah: A Guide to the State and Salt Lake City: Discovering the World. He is director of external relations at the University of Utah’s S.J. Quinney College of Law.

4 thoughts on “A "Teacher who Writes"”