The Block U of the University of Utah is said to be not only the first such symbol placed on a hillside by a university, but one of the largest.

It has its origins in a class competition. In April 1905, the sophomore class at the University laid out and painted a giant “07” on the side of Mount Van Cott, easily visible from the University campus. Not to be outdone, the freshman class replaced the numbers with “08,” and for a time the numbers changed as often as students could scramble up the hill with buckets of lime. 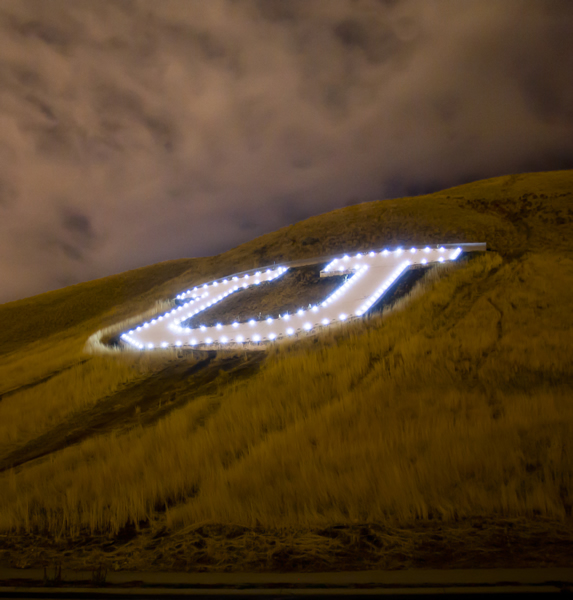 The lights of the icon shine on a recent fall evening. (Photo by Nathan Sweet)

Cooler heads proposed that instead of numbers, a giant “U” be put on the hill, “as an emblem of loyalty to the whole school,” according to an account in the Utonian yearbook. One spring day shortly after this decision was reached, almost the whole student body turned out to haul buckets of lime from a nearby kiln to replace the dueling numbers. But by the spring of 1906, the snow and rain had all but washed it away. It was refreshed that year by 600 students who handled about 5,000 buckets of lime, but it was obvious that unless they wanted to redo it every spring, a better solution was needed.

In 1907, Stayner Richards, the student body president, proposed that the “U” be constructed of concrete and whitewashed each year. This was met with enthusiasm, and with the help of a water wagon drawn by spans of U.S. Army mules borrowed from Fort Douglas, the “U” was laid out. The massive size of the symbol, 100 feet wide by 100 feet tall, meant that it took two days and part of a third for the men of the student body to mix and pour the concrete.

After that, whitewashing the concrete “U” became a hallowed campus tradition every April, and hundreds would participate in the annual ritual. In the 1960s, to make it visible at night, lights were installed. But by the end of the 20th century, the “U” had fallen prey to the ravages of Utah winters and was in poor condition. University administrators and alumni rallied to save the “U,” raising more than $400,000 in a campaign to renovate it. In October 2006, an official lighting ceremony was held during the halftime of a football game between the University of Utah and Texas Christian University.

The new “U” is not only stabilized on its hillside, with a diversion dam and a drainage system to protect it from melting snow, it also has flush-mounted lights that can flash red and white, and be dimmed or brightened as the need arises. The lights are controlled by a wireless signal that emanates from a control panel located in the Merrill Engineering Building. Today, all members of the University community can be proud that the symbol can be seen all over the Salt Lake Valley. As former U president David Gardner once put it: “It flashes when we win a game; it burns steady in defeat.”

3 thoughts on “One More: A Monumental Tradition”