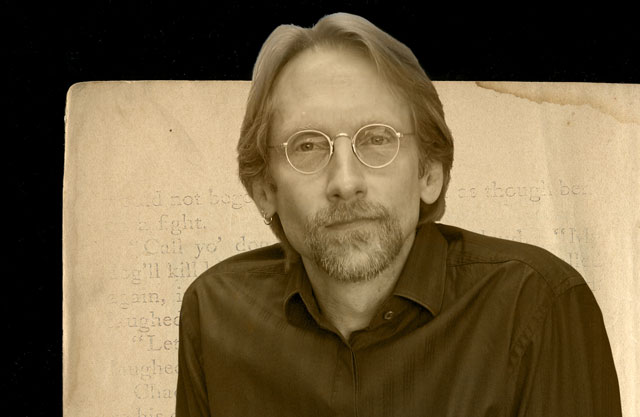 As the author of 10 novels, four short-story collections, four critical studies, one hypertext, a poetry chapbook, and a textbook about fiction writing, as well as editor of two collections of essays about innovative contemporary fiction and chair of the board of edgy publisher Fiction Collective 2 (FC2), Lance Olsen is a bit of an academic and intellectual renaissance man.

Olsen, who arrived at the University of Utah to teach experimental narrative theory and practice in 2007, sat down recently to share his thoughts about his new novel, Head in Flames (Chiasmus Press, October 2009); the state of the current publishing industry; the rewards and challenges of working with students; and how artistic collaboration is a lot like a relationship—which in his case is doubly true, as his most frequent collaborator is his wife, artist Andi Olsen.

Can you talk a little about your impressions of the University of Utah English Department and what brought you here?

The U’s English Department is remarkable for the wonderfully permeable membrane it has constructed between its creative and critical programs, its highly regarded Ph.D. program in creative writing (recently ranked top five nationally by The Atlantic Monthly), the sense of community it generates among its grad students and between those students and its diverse faculty. The easily fused and confused discursive spaces developed here allow one to engage in conversations that simply don’t exist elsewhere.

Because of that environment, the department attracts a particular and particularly interesting sort of amphibious student—one, that is, who moves easily among theoretical, critical, and creative modes of being, aware that the more one explores them, the fewer the categorical differences one finds among them. Criticism thus becomes a subset of fiction, fiction a subset of theory, theory a kind of autobiographical poetry, and so forth.

What is the significance of having FC2 associated with the University of Utah?

FC2 is an independent publisher run by and for innovative authors. Rather than employing a commercial business model, FC2 employs a collective, collaborative one. Begun in 1974 by a handful of writers frustrated at the corporatization of the publishing universe in Manhattan, FC2 figured it would run for three or four years, bring out the work of a few innovative writers, then fold, mission accomplished. Imagine our surprise, then, that, 36 years later, we’re in better shape than we’ve ever been.

The editorial board, board of directors, and the various elements of production are scattered across the U.S. With the essential help of my graduate assistant, FC2 Fellow Matt Kirkpatrick, I coordinate the whole from the University of Utah: production, editorial decisions, advertising, distribution, day-to-day conversations with authors, our two annual contests—one for authors looking to publish their first innovative novels and short-story collections, one for mid-career authors—and so on.

FC2’s presence at the University gives students hands-on experience with how independent publishing works within the larger context of publishing in the U.S., and how publishing in the U.S. works within the larger context of the entertainment industry (commercial publishing, I should mention, is used by entertainment corporations for tax write-offs). For students, being near FC2, being involved in it in various ways, is an invaluable education in the pragmatics of the means of production and distribution in the contemporary book-making industry. In the land of theory and criticism, one often forgets such essential practical concerns as how experimental texts get found, get bound, and get out there.

In other words, you can focus more on the work itself than whether it will make you a lot of money.

It’s the same difference one discovers in the music industry between the world of independent record labels and the world of big Lady Gaga business. New York publishing has increasingly become synonymous, not with serious literary investigations, but with books-as-entertainment—with novels, for instance, that want to be movies when they grow up.

The difference between that and what FC2 does is the difference between Britney Spears’s vanilla pop tunes and Arcade Fire’s alternative complexities. The really interesting stuff, at least by my lights, is happening, metaphorically speaking, down in the clubs, out in the garages.

FC2 can and does publish the sorts of books New York stopped imagining back in the early ’70s because FC2 has decided to operate outside New York’s economic constraints, beyond the deadly notion (at least to fiction in particular, and to the humanities in general) of the grotesquery called the bottom line. Adherence to the bottom line in the arts represents a failure of imagination.

How do you convince a hyper-ironic and skeptical generation of students, many of whom have grown up on these entertainment books, to think that there’s something worth exploring in more challenging texts?

You know you’re in the presence of experimental writing because you feel you need to develop a new language with which to speak about it. My goal in the classroom is to be a language instructor for one that doesn’t yet exist.
The difference between entertainment and art has to do with the speed of perception. Art is designed to slow perception down so one can re-experience experience and thought. Entertainment is designed to speed perception up so one doesn’t need to feel or think about very much at all. The books I teach are all about the former, all about learning how to slow down, defamiliarize one’s engagement with the text of the text and the text of the world.

You might imagine students would grimace at such stuff, but it’s just the opposite. This is the realism their culture(s) understand.

Some of your work walks the lines between nonfiction, fiction, and poetry. 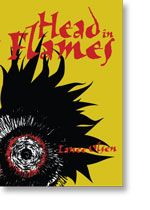 Or perhaps another way of putting it: I’m increasingly interested in post-genre concerns, increasingly comfortable conceptualizing a book like Head in Flames as a text that inhabits the blur-space among several modes of writing at once—a gesture which has the effect of questioning the idea of genre itself, critiquing such notions of disparate difference.

For me, Head in Flames (which centers on two narratives: Vincent van Gogh’s suicide in 1890 just outside Paris, and the murder of his brother’s great-grandson [Dutch filmmaker Theo van Gogh] in Amsterdam in 2004 at the hands of Mohammed Bouyeri) has qualities that align it with the novel (something like a plot, disrupted as it is; something like characters, despite them coalescing on the page quite differently from the way conventional characters might coalesce) and with poetry (its language and look share many more attributes with what we think about when we say “poetry” than with what we think about when we say “narrative”).

The novel’s repetitions and rhythms, its leitmotifs and refrains, however, have more to do, I think, with musical structures. It’s concerned, too, with the materiality of the page, how texts matter, how page turns into stage, and in that way you can see it thinking continuously about its relationship to book art.

Can you describe how the collaboration works between you and your partner, Andi?

Right now we’re working on a series of fake diseases for her ongoing installation called Freak Show—about how freaks are just like us, only more so. Once we began working together back in the late ’80s and early ’90s, the idea of the page lost its invisibility for me. The page became, as I say, matter, part of the authorship of any text.

I think of art in general and writing in particular as a possibility space where everything can and should be thought, challenged, attempted. Collaboration helps bring you into that space. Collaboration won’t let you settle, and I enjoy that unsettled feeling. It’s the place where appealing events happen.

One of the many things I love about working with Andi (and this is essential to any collaborative endeavor) is that something always results that neither one of us could ever have envisioned at the starting gate. The sum, in other words, is continuously more exciting, surprising, and liberating than the parts.

How wonderful is that?

—Paul Ketzle PhD’04 is an English instructor in the University of Utah’s LEAP and Honors programs and an occasional contributor to Continuum.

For more of Ketzle’s interview with Lance Olsen, click here.

Lance Olsen is a National Endowment for the Arts fellowship and Pushcart Prize recipient, and a former governor-appointed Idaho writer-in-residence. His novel Tonguing the Zeitgeist was a finalist for the Philip K. Dick Award, and his short stories, essays, poems, and reviews have appeared in hundreds of journals, magazines, and anthologies, including Conjunctions, Black Warrior Review, Fiction International, Iowa Review, Village Voice, McSweeney’s, and Best American Nonrequired Reading. In addition to several American universities, he has taught in Oxford and London, on a Fulbright in Finland, at various writing conferences, and elsewhere, and his work has been translated into Italian, Polish, Turkish, and Finnish. Olsen’s personal Web page includes the full text of his resignation letter to the University of Idaho: www.lanceolsen.com/bio.html.