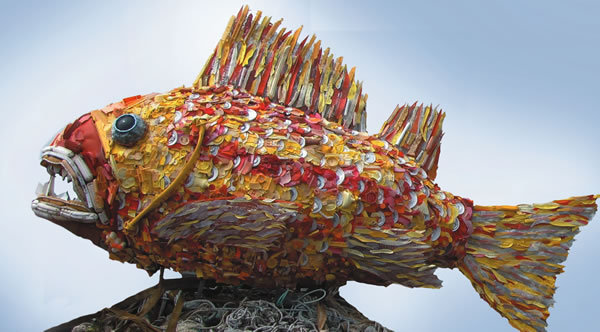 A huge fish sculpture outside the Newport Visual Arts Center.

Personal tragedy helps an alum find beauty and meaning in the ugly and awful.

From the day the photography exhibit opened at the Salt Lake Art Center, where she worked to help pay for college, one image captivated Angela Haseltine Pozzi BS’84: a cascade of red and white rubbish spilling down a stairway like some sort of back-alley waterfall. 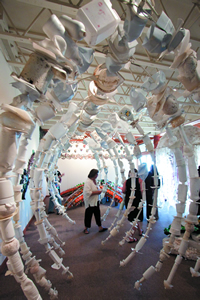 A “whale skeleton” made from Styrofoam containers and other junk.

It was 1978, and each day at work, she gazed at the picture. She considered its graceful composition and wondered where the artist found his inspiration.

“How,” she remembers asking herself, “could someone make garbage look so beautiful?”

More than three decades later, those who hear her story, who see the sculptures she spearheads along Oregon’s coast, and who listen to her dream of spreading her community art project worldwide, understand that trash and hope can wash ashore on the same beach. They grasp how beauty can rise from all sorts of ruin.

Angela met the photographer, Craig Pozzi, the following year at a disco dance, its being 1979 and all. It was, she says, “love at first sight. Cupid’s arrow.”

He was 36, blond and blue-eyed, and had been teaching photography in the University of Utah’s Graduate School of Architecture for three years. She was 21, studying dance and education at the U, and passionate about art.

They wed on July 4, 1980. “He liked the idea of getting married on Independence Day,” Angela says, a smile spreading wide across her face. “He had a great sense of humor.”

As attractive as the Wasatch Front is, in many ways, the Pozzis were ocean people. Craig had served as a U.S. Navy lieutenant, and Angela grew up poking around Puget Sound’s tidepools and summering at a family cabin on Oregon’s coast. After she graduated from the U in 1984, they headed west, eventually landing in the Portland area. She taught in Vancouver, Wash., public schools and he at Vancouver’s Clark College and Portland State University. Their lives, which included their sandy-haired daughter, Nicola, were busy and happy.

But in 1994, things changed. Craig began having episodes, periodically finding himself unable to speak for 30 seconds or longer. His heart raced, and something fluttered in his head, he told Angela. The episodes left him exhausted and baffled.

Kaiser Permanente physicians diagnosed panic attacks. For the next seven years, Angela says, they prescribed antidepressants and urged her mellow husband to relax. When the episodes landed him in the emergency room and he told doctors he was having seizures, she says, they ignored his self-diagnosis.

On Christmas Eve 2001, a bout of vomiting and a raging headache sent Craig to the hospital, where a scan revealed crushing news: bleeding in the brain and an oligodendroglioma, a slow-growing tumor the size of a racquetball. The tumor’s tentacles had invaded both brain hemispheres. Able to remove only about one-third of it, a surgeon told the Pozzis that Craig had perhaps five years to live.

When he recovered, Angela remembers, he told the neurosurgeon that the operation seemed to have eliminated his panic attacks. The surgeon set him straight: Craig had never had panic attacks; his episodes were seizures caused by the tumor.

The couple considered suing for all those years of misdiagnosis, but, Angela says, “he didn’t want to live his last years in court.”

After radiation, Craig returned to teaching and photography. But in November 2003, he suffered a hemorrhagic stroke. His left side paralyzed, he required a feeding tube, a shunt in his brain, and 24-hour nursing care.

“All I cared about,” Angela says, “was trying to save my husband’s life.”

Their Kaiser insurance didn’t cover all his care. As bills piled up, the Pozzis reconsidered a malpractice claim, and in February 2004, their attorney requested Craig’s medical files. Angela holds her hands more than a foot apart to illustrate their bulk. The records weighed 35 pounds.

Craig was 61 when he died that November.

“I felt my heart,” Angela says, “was ripped out of my chest.”

Too torn up to return to teaching, Angela borrowed against their home to pay the bills and care for their daughter. She wasn’t sure how she’d get by if she didn’t win the lawsuit.

The two-week trial ended in July 2007. After lawyers got their share, Angela was left with $2.4 million, not as much as she’d asked for but enough to craft a life.

She wanted to publish a book celebrating Craig’s keen photographic skill—and still hopes to. But first, she needed time and the right space to find her own path, to learn who she was without the husband she married at 21. She wanted to invest, says Angela, now 52, “in spaces where I could make good things happen.”

She headed south, toward the family cabin where she’d spent blissful summers as a child, slipping down dunes of sugary sand and dipping her toes in the numbing ocean. The move fit so well that today she seems as at home as the resident pelicans.

Travel U.S. 101 and you might find Angela there in Bandon, a town of about 3,300, where the cool, green Coquille River spills into the Pacific Ocean 230 miles southwest of Portland. Loggers and fishermen used to make the economy hum, but now the Tony Bandon Dunes Golf Resort is the area’s top employer.

Angela bought a home near downtown. Through Artula Institute for Arts and Environmental Education, a nonprofit she founded, she offers residencies for artists nationwide, giving them space to paint, write, sculpt, make music, or take photographs.

About six miles south, past fairways, cranberry bogs, and myrtlewood shops, is Art 101, the gallery where she sells local artists’ work and shows her own, including her fantastic, glow-in-the-dark, walk-through “Bioluminescent Sea Cave.”

She lives nearby, toward rugged beaches carved by the howling winds, pounding surf, and nearly 60 inches of rain that typically fall each year.

Landing in such a place after Craig’s death, she says, felt right. She needed a landscape not unlike a fresh canvas, a home where each tide might bring opportunity or happiness or hope.

The purple yurt across the parking lot from her gallery is a traffic stopper, which wasn’t what Angela had in mind when she erected it as workshop space for her newest art project. At the start, she didn’t know where the project was headed, but as it grows and her vision crystallizes, she needs all the help she can get. She’s thrilled that some of those thousands of travelers cruising the coast park, get out, and brave their way past bins overflowing with beach debris. 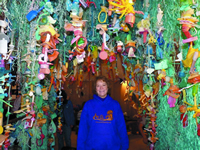 Angela Haseltine Pozzi with some of her “trash.”

All of it arrived with the surf. One day, Angela picked up all the trash she could carry—by the next, the Pacific had delivered a new load of cast-offs from wasteful societies worldwide. Beach walk by beach walk, Angela realized how sickeningly vast the problem is, not only in Bandon but on beaches everywhere.

“I became a garbage expert,” she says.

In early 2010, Angela challenged herself: Garbage plucked from the beach would be her sole source of art supplies. From whatever she found, she’d build huge sea-creature sculptures—rockfish, jellyfish, sea stars, turtles, whales. Those who saw them, she hoped, would find the beasts as fanciful and beautiful as they were horrible. They’d start to understand the plague of plastics in aquatic ecosystems. 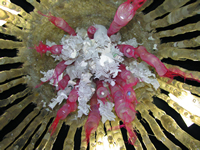 Looking up inside a water bottle jellyfish.

She calls the project “Washed Ashore,” and it’s no longer just her baby. Now, state and federal land managers deliver loads of beach debris to the bins outside the yurt. Local residents do, too.

Three times a week, Angela opens the yurt to volunteer work parties—parents and children, high-school classes, Scout troops, retirees, and the youthful crowd that keeps Bandon’s tourist industry churning. Some are locals. Others are passing through. They clean, sort, and stack garbage; drill holes in hunks of plastic or wire it onto the beefy turtle taking shape near the entrance, or the enormous jellyfish that hangs from the ceiling, tentacles dangling from a body built from hundreds of beached water bottles.

“All our sculptures are giant,” Angela says, “because it’s a giant problem.”

This summer, “Washed Ashore” sculptures made their debut at the Newport Visual Arts Center, north of Bandon, where they remained on display through Nov. 28.

The show is only a start. A film director is helping Angela with a documentary about “Washed Ashore.” She plans to write curricula that will travel with the marine debris sculptures to communities across the West and beyond.

She charges through all of it with the spirit of someone who has found her footing after a long, difficult journey.

—Katy Muldoon is a staff writer with The Oregonian in Portland. This is her first article for Continuum.

One thought on “Washed Ashore”