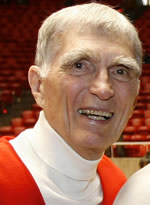 The lobby of the Ogden [Utah] High School Athletic Complex has been dedicated in honor of Arnie Ferrin BS’66. Ferrin was a co-captain of the Ogden High basketball team in 1943 and led his teammates to the Region 1 championship that year. He went on to play for the University of Utah, where he was named Most Outstanding Player in the NCAA tournament as a freshman. The Utes won the NCAA Championship in 1944 and the National Invitational Tournament Championship in 1947, and Ferrin was selected All-American all four years of collegiate play. In 1948, the Minneapolis Lakers chose Ferrin as their first-round draft pick. He played with the team for three years, helping win two NBA championships. He then went on to coach before being named athletics director at the U, where he served for 10 years. After leaving the U, the NCAA elected Ferrin chair of the basketball committee in 1988. In 2008, Ferrin was named to the College Basketball Hall of Fame. LM

Christopher Aadnesen BA’71 MBA’73, the Alaska Railroad Corp.’s new CEO, isn’t kidding when he refers to himself as “a very atypical” railroad executive. Prior to entering the railroad industry, Aadnesen, now 62, flirted with a career in rock ’n roll, playing with two bands and releasing several albums. He majored in comparative literature and history during his undergraduate studies at Brown University, and the bachelor’s degree he ultimately received from the University of Utah in English wasn’t in any way related to railroad management. Aadnesen today boasts an impressive résumé outlining his international railroad experience, including various positions with the Union Pacific Railroad Co. over about 22 years, as well as his work as an independent contractor assisting in the privatization of a Mexican railroad.

Roberta Achtenberg JD’75, a co-founder of the National Center for Lesbian Rights and a top housing official in the Clinton administration, has been appointed by President Barack Obama to a seat on the U.S. Commission on Civil Rights. The eight-member panel—half appointed by the president, half by Congress, each for six-year terms—has broad investigatory powers, but no enforcement authority over specific cases. When she was appointed assistant secretary for fair housing within the Department of Housing and Urban Development by Clinton in 1993, Achtenberg became the first openly lesbian or gay presidential appointee to win Senate confirmation. Achtenberg later served the Clinton administration as a senior advisor to the HUD secretary. Achtenberg was a civil rights attorney when she helped found the San Francisco-based National Center for Lesbian Rights in 1977.

Gregory L. Crawford MBA’78 has been appointed executive director of the Steel Recycling Institute (SRI). Formerly SRI’s vice president of operations, working with private-sector and local/federal government managers on steel recycling issues, Crawford has been active with technical and marketing initiatives for sustainability for many years. In 1990, he joined the original ASTM E50 Committee on Environmental Assessment. In August 1995, he participated in the first meeting of the then-fledgling U.S. Green Building Council, in Big Sky, Mont. Crawford is also the executive director of the Cool Metal Roofing Coalition and secretary for the California-based Cool Roof Rating Council. In addition, he is on the board of the Athena Institute and a member of the California Association of Building Energy Consultants. He is immediate past chair of the Sustainable Buildings Industry Council. In addition to his MBA, he holds a bachelor of science degree in engineering from the U.S. Military Academy in West Point, N.Y. 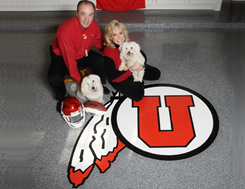 Greg and Suzanne Starley beside the University of Utah athletics logo on their garage floor.

Greg Starley BS’76 MS’80 PhD’82 was met with a nice surprise recently when his wife, Suzanne, had a bonus feature added to their newly painted garage floor. The Starleys live in Kingwood, Texas, just outside of Houston, where Greg  is senior engineering advisor  for Devon Energy Corporation. For those who have visited the Warnock Engineering Building, the Starley appellation may sound familiar, as Greg and Suzanne made a gift to name the Starley Commons on the structure’s main floor. The Starleys also contribute an annual scholarship to the U of U Department of Chemical Engineering and are season ticket holders to Ute home football games, making the trip from Houston to Salt Lake City to attend nearly every one.  AM

Stath Karras BS’80 MBA’84 is executive managing director of Cushman & Wakefield’s Investment Sales Group. Based in San Diego, Karras works with investment sales brokers throughout the U.S. He has more than 30 years experience in the real estate industry, including 19 with Burnham Real Estate Services, where he served as president and chief executive officer. He has also been a teaching fellow at the U of U in real estate investment and appraisal.

Kendall Larsen BS’80 is founder, CEO, and chair of VirnetX Holding Corp, a licensing and technology company serving the security sector, which incorporated in 2005 and went public on the American Stock Exchange in 2007. Previously, Larsen was a Limited Partner at Osprey Ventures L.P., a venture fund that makes investments primarily in business and consumer technology companies. Prior to that, he was senior vice president and general manager of the security products division of Phoenix Technologies Ltd., a software and firmware developer. He has also held senior executive positions at leading technology companies including RSA Security Inc., Xerox Corp., Rolm/International Business Machines Corporation, Ramp Networks, and Novell Inc.

Chris Bradley MBA’83 is president and CEO of the Portland, Maine-based company Cuddledown, which makes a variety of bed and bath goods, including pillows, sheets, duvet covers, feather beds, pet beds, pajamas, and bath towels. Bradley, a former Wall Street executive, bought the company in 1988 shortly after moving to Maine. Most of the company’s down comes from large, mature geese raised for food in countries such as Hungary, Poland, and the Czech Republic, where geese are popular holiday fare. But some of Cuddledown’s priciest products are stuffed with eiderdown, which is harvested from eider duck nests by Icelandic farmers. Cuddledown has roughly 100 employees and is at its core a pillow and comforter company, making some 16,000 comforters and 65,000 pillows annually.

Jon Maesner DPh’86 has been named CIGNA’s chief pharmacy officer. He leads CIGNA’s coordinated approach to integrating medication therapy with its medical, health and wellness programs to improve health outcomes and lower total health care and disability costs. Maesner joined CIGNA in 1996 and has held roles of increasing responsibility in his career at the company, including leading development of CIGNA’s health improvement services and health care selection tools for customers. Maesner previously held a variety of other positions in the managed health care and pharmaceutical industries.

H. Mark McGibbon BS’86 is currently the Lockheed Martin Corporation (LMC) Visiting Professor at the National Defense University Information Resources Management College. McGibbon is an NROTC University of Utah graduate and was commissioned in the U.S. Navy. He served his country in Iceland, Spain, and the United Kingdom, and deployed on ships throughout Europe. While in the Navy, he received a master’s degree from the Naval Postgraduate School, founded two small businesses, and was an adjunct professor at the University of Maryland, Troy State University, and Pensacola Junior College. After the Navy, he worked for Science Applications International Corporation (SAIC), a leading U.S. specialty technology company, as the European advanced technology concept demonstration oversight manager in Germany. He then joined LMC in 2003 as the European chief enterprise architect/European director of operations. In addition to his visiting professor appointment, McGibbon is an adjunct graduate professor at the University of Maryland and Northcentral University (from which he holds a doctorate).

Patrick Loughlin MS’88 has been elected a Fellow of the Institute of Electrical and Electronics Engineers (IEEE), the world’s leading professional association for the advancement of technology. Loughlin is William Kepler Whiteford Professor of Bioengineering and Electrical & Computer Engineering at the University of Pittsburgh, where he became a faculty member in 1993. He has made significant contributions to signal processing and bioengineering, including the development and application of nonstationary signal processing methods (especially time-frequency distributions) and development of a physical model of anesthetic uptake, for which he holds two U.S. patents. Loughlin is also associate editor and a member of the editorial board for the IEEE Transactions on Biomedical Engineering and a member of the technical committee on acoustic signal processing of the Acoustical Society of America. His research has been supported by institutions including the National Institutes of Health, National Science Foundation, Department of Defense, and Boeing.

Lauri Linder BSN’89 MSN’94 PhD’09, a clinical nurse specialist and assistant professor at the University of Utah’s College of Nursing, was one of seven researchers to receive a 2010 Nurse Researcher Grant from Alex’s Lemonade Stand Foundation, which funds research projects nationally. Linder received $100,000 to investigate the relationship between symptoms and the hospital care environment. Over two years beginning this past spring, she is enrolling 50 patients, ages 7 to 18, who have been admitted to the hospital and are expected to stay at least three nights. For each day and night shift, the children will be asked about their symptoms, including fatigue, sadness, pain, nausea, and worry. Linder wants to find out how nurses can improve the hospital environment to best help heal the sick.

Jeanne “Gigi” Darricades JD’92 has been selected as the new president/chief executive officer of Valley-Wide Health Systems, one of the largest federally qualified health centers in the nation. Originally from Chile, Darricades is bilingual, and in addition to her JD, holds a bachelor’s degree in political science and a master’s of public health in hospital administration from the University of California. She brings to Valley-Wide a wealth of knowledge and experience in the health care field, as well as an understanding of the legislative process, affiliations with legislators, and experience with not-for-profit boards. She is also a practicing attorney.

Erika Overturff BFA’02 is currently a dancer with and artistic director of Ballet Nebraska, the professional ballet company she helped form after Omaha Theater Ballet closed at the end of the 2009-10 season. Performing to enthusiastic audiences through its first year, Ballet Nebraska most recently performed A Midsummer Night’s Dream in May. Overturff grew up and trained in Dubuque, Iowa. She came to the Omaha Theater Ballet in 2004, and has also worked in Alabama with the Montgomery Ballet and the Alabama Ballet. Overturff is married to Brandon Dickerson BS’03 (J.D., Creighton University), who is a corporate attorney at a firm in Omaha. She notes, “We met during our freshman year at the U!”

J.R. Burningham BS’03 won $1 million after a commercial he directed topped the USA Today Super Bowl Ad Meter. A Salt Lake City native, Burningham graduated from Alta High School before attending the University of Utah. The commercial shows a man mocking a pug with a bag of Doritos through a glass door. The dog then knocks down the door (and the man) and eats the chips. The ad was one of thousands entered in the Doritos Crash the Super Bowl ad contest. The finalists were judged by a panel of viewers who rated the commercials as they watched them.