E. Gordon Gee BA’68 (along with a J.D., Columbia) was recently featured as one of Time magazine’s picks for “The 10 Best College Presidents.” Gee, president of The Ohio State University, is one of the most experienced university executives in the U.S. This is his second stint as president at Ohio State; he returned there in 2007 after having served as chancellor of Vanderbilt University for seven years. Prior to his tenure at Vanderbilt, he was president of Brown University (1998-2000), The Ohio State University (1990-97), the University of Colorado (1985-90), and West Virginia University (1981-85). Gee now presides over some 40,000 employees, one of Ohio’s largest and best hospitals, a major hive of research, a small-business incubator, a hugely popular sports-entertainment empire, a large portfolio of real estate (including a small city’s worth of housing units), and a network of extension operations reaching into nearly every community in the state. To watch videos of Gee in action, click here.

Pramod Amin MS’71 has become perhaps the most prominent hotelier in central Virginia and one of the most successful independent hotel owners in the state. In the past year alone, Amin has invested $178 million to open 10 hotels in metro Richmond, including his new flagship property, the $48 million, 254-room Hilton Richmond Hotel & Spa in western Henrico County. The 246,000-square-foot hotel offers more than 22,000 square feet of meeting space, including a ballroom able to accommodate 1,300 people. Amin plans to expand along the East Coast into the Washington and Baltimore markets and, eventually, hopes to go international with hotels in London, Mumbai, and Bangkok. His Shamin Hotels Inc. currently employs 1,000 people and has assets of $600 million in Virginia, North Carolina, and Maryland.

Michael Cotter MBA’73 was nominated by President Barack Obama in late September 2009 to serve in the post of U.S. Attorney and was confirmed by the U.S. Senate in late December. Cotter had been the sole practitioner at Michael W. Cotter, P.C., in Helena, Mont., since 2000. He began his legal career as an associate at the Law Offices of John C. Hoyt, later forming the Cotter & Cotter Law Firm with his wife, Montana Supreme Court Justice Pat Cotter. Michael Cotter served on active duty with the United States Army from 1972-74 and was honorably discharged as a first lieutenant. He received his J.D. from the University of Notre Dame. Cotter is one of 93 U.S. attorneys in the country, and the only one for Montana, replacing U.S. Attorney William W. “Bill” Mercer.

O. Randall “Randy” Woodbury BA’77, CPM, has been elected 2010 president of the 18,000-plus-member Institute of Real Estate Management (IREM), which has been the source for education, resources, and information for real estate management professionals for more than 75 years. Woodbury is corporate secretary and vice president of property management for Salt Lake City-based Woodbury Corporation, a family real estate firm founded in 1919, which specializes in developing and managing retail, office, and hotel properties in the western United States.

James S. Fassio BS’77 has been promoted to president and chief development officer for Ross Stores, Inc. Previously executive VP, he will continue to oversee the company’s entire property development group, including the real estate, market research, and store design for both Ross Dress for Less and dd’s DISCOUNTS. After receiving a bachelor’s degree in finance with an emphasis in real estate, Fassio continued his career with Safeway Stores, Inc., and in 1985 joined U.S. Venture Partners in Menlo Park, Calif. In 1988, Fassio moved full time to Ross Stores, Inc., where he has overseen the growth and development of the company, a Fortune and S&P 500 Company, with gross revenues of approximately $7 billion and 45,000 employees nationwide.

Lynn D. Malmstrom BS’77, CPA, a senior executive with more than 30 years of management experience, has been hired as the chief financial officer of California Shock Trauma Air Rescue (CALSTAR), a nonprofit air ambulance firm serving Central and Northern California and parts of Nevada. Malmstrom was most recently president and CEO of Malmstrom & Associates, Inc., which he founded, with offices in Salt Lake City, Utah, and Eugene, Ore. The corporation specializes in consulting with client companies to improve their performance and profitability. Malmstrom has also provided sales consulting, mentoring, workshops, seminars, and keynote speaking engagements to Cisco, Intel, Oracle, IBM, AT&T, Sun Microsystems, SAP, and other firms. From 1994 to 2000, he was vice president and CFO at Rocky Mountain Helicopters and LifeNet.

Simone Simonian BFA’78 was commissioned by the University of Utah College of Humanities and Nayra Atiya BA’64 to paint portraits of her parents for their namesake Aziz and Lola Atiya International Programs Center at the new Carolyn Tanner Irish Humanities Building. Simonian’s portraits of the Atiyas were completed this March. See the paintings here.

The late Professor Aziz Atiya founded the Middle East Center at the U of U and edited the eight volumes of The Coptic Encyclopedia, publication of which was completed under the direction of his wife and assistant, Lola, after his death in 1988. The J. Willard Marriott Library is also home to the Aziz S. Atiya Middle East Library, a circulating collection of more than 150,000 books.

This will be the first portrait of Lola, but the late Alvin Gittins, a noted portrait painter and professor of art at the U, produced a previous portrait of Aziz in 1968. Simonian studied under Gittins while a student at the U. Simonian has painted several privately commissioned portraits, but these are his first public and institutional commissions.

In addition to naming the center, Nayra Atiya has established an endowment to fund research in Coptic and comparative religious studies. The first project funded through the endowment is now in the works: The publication of the Coptic Patriarch’s Index, written by Lola Atiya, who died in 2002. It is a companion to the Coptic Encyclopedia, which is now a standard reference book for scholars worldwide.

G. Paul Doxey MD’80 has been honored with the Jerome C. Goldstein Public Service Award from the American Academy of Otolaryngology–Head and Neck Surgery. Doxey was recognized for his work with the Doctors’ Volunteer Clinic in St. George, which he helped found in 1999, and for which he serves as president and chair of the Board. He is a past president of the Utah Society of Otolaryngology–Head and Neck Surgery and the Washington County Medical Society. In his 2009 “State of the State” address, former Gov. Jon Huntsman, Jr. ex’85 recognized Doxey for his work in providing health care to the uninsured residents of Utah. Doxey has been in practice for 24 years, nine in Salt Lake City and 15 in St. George. AM

John Robinson MD’80 has been promoted from medical director to chief medical officer of the Molina Healthcare of Washington health plan. Robinson is a board-certified family practice physician and has more than 25 years of medical experience. He has previously held leadership roles including president of Utah HealthCare Institute and director of development at FHP in Utah. In addition to a medical degree from the U of U School of Medicine, where he also completed his residency, Robinson holds a bachelor’s degree in chemistry from Gonzaga University in Spokane, Wash., and a master’s degree in health care management from the Harvard School of Medicine in Boston, Mass.

Patricia Berry MS’80, Ph.D., APRN, FAAN, associate professor at the University of Utah College of Nursing, has been inducted into the American Academy of Nursing. Berry was chosen by the academy’s 15-member Fellow Selection Committee for her outstanding achievements in the nursing profession. In addition to being a certified gerontological nurse practitioner and an advanced practice palliative care nurse, Berry is associate director, education and practice, for the University of Utah’s Hartford Center of Geriatric Nursing Excellence. With 32 years of experience in hospice and palliative care, Berry has contributed to critical policy, educational, and scientific initiatives to improve the management of pain and symptoms, especially for individuals with life-limiting illnesses and their families.

Catherine M. Larson BS’82 JD’93, president and managing shareholder with the law firm of Strong & Hanni, has been inducted as a fellow in the Litigation Council of America. Larson has 17 years of experience representing physicians, nurses, and other health care professionals in a variety of medical malpractice litigation matters. With a bachelor’s degree in nursing in addition to a juris doctorate, she currently serves on the Defense Research Institute Medical Liability Committee and is a past president of the Utah Chapter of The American Association of Nurse Attorneys.

Matt Berrett BA’85 is currently the CIA’s director of the Office of Middle East and North Africa Analysis. Berrett went to work for the CIA directly after receiving his bachelor’s degree in economics from the U. He recently spoke at the U to encourage other students to consider pursuing his career path. The largest demands the CIA has right now are for terrorism analysts, polygraphists, and analysts who can speak South Asian languages, particularly Urdu and Pashtun, Berrett says. The agency accepts applicants from almost every area of expertise, and even students fresh out of undergraduate studies remain eligible for hire.

Brad Cahoon JD’91 has been elected to the Board of Directors of the American Lung Association Southwest Region, covering Utah, Arizona, Colorado, New Mexico, and Nevada. He also serves on the American Lung Association of Utah board and is past chair of that organization. Cahoon is a partner with Snell & Wilmer, representing a variety of clients in all aspects of environmental, zoning, land use, natural resources, and water law.

John A. Pearce BS’92 has been named general counsel to Utah Gov. Gary Herbert. A civil litigator with Jones Waldo Holbrook & McDonough since 1999, Pearce has been involved in several high-profile cases involving the ballot initiative process. A native of Magna, Utah, he holds a bachelor’s degree in economics from the U and a law degree from the University of California, Berkeley. He is a member of the Utah and California bar associations. Pearce is married to Jennifer Napier-Pearce BA’91, the news director at KUER radio. 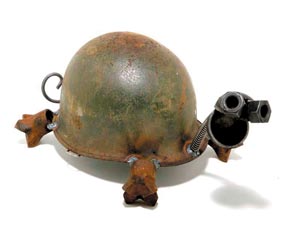 shapes fanciful creatures out of scrap metal, rusty screws, and bolts at his Sugar Post metal shop in Salt Lake City. Originally a potter, Conlon first learned to weld on a whim for a job interview while in college. After graduating with a degree in communication, he opened a pottery shop. Pottery held his interest until about six years ago, when a pile of army helmets at a surplus store sparked an idea. Conlon remembered a comment from his grandfather: “War happens quickly, but peace happens slowly.” The old, rusted World War II helmets reminded Conlon of turtle shells and the animal’s slow crawl, so he crafted a turtle, using the helmet as a shell and drill bits for the feet, and used it as decoration for his pottery shop. After a regular customer asked Conlon if he could purchase the turtle, Conlon sold it, quickly made several more, and sold all of those. With the turtle a success (it is still his most popular item), Conlon’s metal art became his professional focus. Conlon’s creations are available at www.sugarpost.com.

Matthew Batt PhD’06, an assistant professor of English at the University of St. Thomas in St. Paul, Minn., was awarded a 2010 literary fellowship of $25,000 from the National Endowment for the Arts. Batt’s fiction and nonfiction have recently appeared in Tin House, Mid-American Review, Fifth Wednesday Journal, and Western Humanities Review, and he is currently finishing the unauthorized biography of his house. Batt lives in St. Paul with his wife, Jenae, and their 2-year-old son.

Tyson Odekirk BS’00 (double major in economics and speech communication) has joined the UK Financial Services Authority as a senior associate in the investment and wholesale banking group and is currently based in London. Odekirk previously served in risk management with GE Capitol and as an analyst with the Federal Reserve Bank. He attended the Booth School of Business at the University of Chicago.

We want to hear from you!