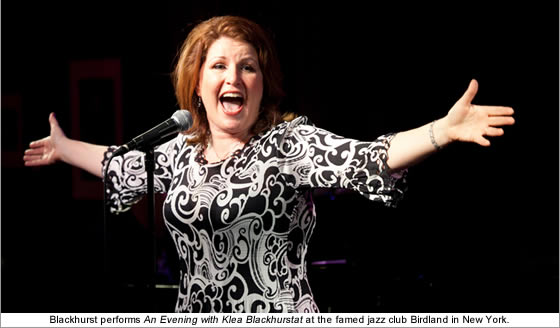 Performer Klea Blackhurst BFA’85’s first time on stage was while she was still in utero, when her pregnant mother, Utah actor Winkie Tedesco Horman BFA’61, appeared in Oklahoma! singing “I’m just a girl who cain’t say no.” The next time she appeared on stage with her mother, she played the Indian princess’s daughter—and got to die convincingly on stage, at the ripe old age of 3.

When she wasn’t performing, young Blackhurst tagged along to her mother’s rehearsals for a string of performances on the University of Utah campus—both in Kingsbury Hall and in the newly built Simmons Pioneer Memorial Theatre. (Blackhurst was known as Michelle Horman back then, because she used her middle name and her stepfather’s last name for a while.)

“It was always Broadway, and it was always music,” says Blackhurst. “I never looked back.

“As a little kid, I’d be on a blanket in the aisle or I’d fall asleep in the seats,” she says.  “I was comfortable in that world, and I really loved the musicals. I was always waiting for that rehearsal pianist or the orchestra to start up.”

Now when she waits for the musicians to begin playing, they’re accompanying her.

It’s a Friday afternoon in New York, a few hours before Blackhurst steps on stage with the Peccadillo Theatre Company to play Aunt Sissy in A Tree Grows in Brooklyn, the first full-length New York revival of the American musical in 60 years. Near the Manhattan base of the Brooklyn Bridge, she’s relaxing in the home that she shares with her partner of 17 years, Pam Shepard, and their dog Moses, a shih tzu and Yorkie mix. “He looks like Jon Bon Jovi in his heyday,” says Blackhurst. 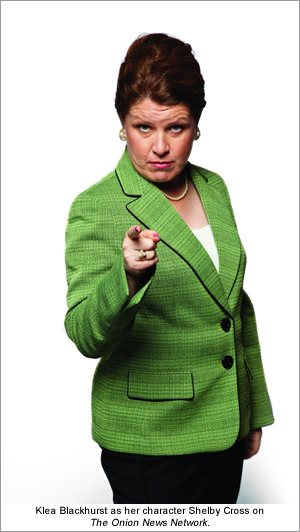 With a ready laugh, the vibrant redhead describes herself as a “belter” who can talk all day. And her laugh is a constant presence. Even when she attempts to give a serious answer, she barely reaches the end of the sentence before she’s laughing again. In a city known for its drama, Blackhurst is a toe-tapping relief.

New York is where she’s wanted to be all along, and she’s been here for more than 25 years now. Not bad for a Utah girl with a dream.

“I desperately wanted to play trumpet in Broadway orchestras,” she says, admitting that watching all those theater orchestras as a child made trumpet her first “great love.” “But by the time I got to high school, it was clear I had about 15 minutes of lip for every 45 minutes of rest. Then I realized I could sing and sing and sing and never get tired.” With the encouragement of her Cottonwood High School band teacher, who gently helped her choose between being a musician and being an actor, she finally focused on acting and singing.

After graduating from Cottonwood High, she attended the University of Utah on a theater scholarship. While at the U, she followed her mother’s theatrical footsteps onto Pioneer Memorial Theatre’s stage. “I was in about 14 shows at Pioneer,” she says, from Guys and Dolls in 1981 to Hello Dolly in 1985, when she graduated with a bachelor’s degree in theater with a musical theater emphasis. She credits professors such as Anne Cullimore Decker BS’57 MFA’82 with helping her shape her talent. “It was a fabulous training ground—so many directors and stars; very expansive.”

Then, with her theater degree and a host of musical-theater credits in hand, Blackhurst did what she had been planning to do her entire life: She packed up and headed for New York. “I came to New York because this is where they kept Broadway,” she says, making it sound so simple. “It was always Broadway, and it was always music. I never looked back.”

Her first big break was in Oil City Symphony at Circle in the Square Downtown. Before long, she was working with the authors of that show to create a role for herself in Radio Gals. She had found her element. Since then, her acting and singing career has taken her from Carnegie Hall to London’s Royal Albert Hall, and from Broadway to regional shows to television.

But at some point a decade or so ago, Blackhurst decided she needed a change. “I wasn’t being hired for the kinds of things I wanted to be doing.” So she penned a one-woman show that combined her passions for musical theater and the songs of another “belter” whose music she had grown up singing: Ethel Merman.

Blackhurst’s show, Everything the Traffic Will Allow: The Songs and Sass of Ethel Merman, wowed New York audiences when it opened in 2001, garnering an enthusiastic review from The New York Times. Less an imitation and more of a playful homage to the Broadway legend, Blackhurst’s show is peppered with historic and comic anecdotes of the woman who sang so many great Broadway songs that became part of America’s collective consciousness. The show “was so well received, it pointed very clearly to the fact that I wasn’t supposed to be done yet,” says Blackhurst. “It’s played all over the country and in London, and people love it.”

The show didn’t just reintroduce Merman to audiences. “It showed me how much I love my history,” says Blackhurst, who jokes about occasionally being called Ethel Mormon (although no longer an active member of The Church of Jesus Christ of Latter-day Saints, she was raised a Mormon). “One of the things I’ve become is a musical-theater historian. I perform what I find rather than write about it. … I just get up and try to tell a funny story about it.”

For the last 10 years, Blackhurst has continued writing and performing shows that bring musical-theater history out of the mothballs and back onto the stage and into concert halls where she believes it belongs. Her well-received tribute to Vernon Duke highlights the flop-prone composer’s recognizable hits and lesser-known treasures. She teamed up with Billy Stitch to create a show paying tribute to the music of Hoagy Carmichael. Her CD recordings are lauded for her talent and obvious passion.

Between her historical romps, Blackhurst takes on roles in plays and musicals. She also returns to Utah every year to visit family. Last year, she accepted a Distinguished Alumna Award from the University of Utah’s College of Fine Arts.

Her latest project? She’s Shelby Cross in The Onion News Network, a satirical weekly half-hour comedy show on the Independent Film Channel. “The baristas at my local coffee shop think I’m a rock star because I’m on The Onion,” she says, that rich laugh bubbling to the surface again. “I’m just a good old Utah girl—I’m as nice as you can get—but on The Onion, Shelby Cross is the most wonderful alter ego for me, because she’s just awful!” 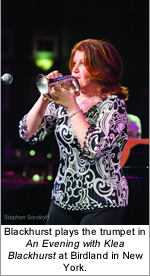 When asked if her career has taken her where she thought she would go, she answers, “No, not at all.” Then she pauses for a perfect comedic beat and adds, “Yes, absolutely.” Originally, she says, “I expected to be an actor in cast after cast.” But it didn’t really turn out that way. Instead, “I’m performing with orchestras, doing my shows in different cities, getting to talk to audiences about Ethel Merman, Gershwin, and Vernon Duke.” Still, she occasionally finds herself in a cast with other actors, like in A Tree Grows in Brooklyn, which she says came as a refreshing change of pace.

“Shakespeare said, ‘All the world’s a stage,’ but the older I get, the less I think it’s a Shakespeare play, or a Chekhov play, or an Ibsen play, or even a Neil Simon play. It’s an improv,” she says. “The first rule of improv is to just say yes, so whatever comes along, just say yes to it.” She rattles off instances of saying yes: “Would you want to come sing Oklahoma! at Albert Hall in London? Yes! Would you come and speak to our women’s club about Ethel Merman? Yes!”

Her most surprising example of saying yes might be the time she was asked to develop the role of Cassandra in a musical based on Helen of Troy, featuring the music of rock band AC/DC. She said yes, and thoroughly enjoyed herself. “If you get in your own way at that time in the story, you miss a fabulous opportunity.”

Blackhurst aims to continue that habit of saying yes as she looks to her future. For several years, off and on, she’s been working with Jerry Lewis as he creates a musical version of The Nutty Professor, a project close to his heart. So whether that project comes to fruition, or The Onion News Network keeps her busy for several more seasons, or a director calls tomorrow with a juicy part in a new musical, Blackhurst is ready.

“The more I let go of the expectations, the more delighted I am to find what’s offered to me,” she says. “You know what? By the time people are reading this, who knows what will have come to be?”