For this composer, success was slow to come but is all the sweeter for it. 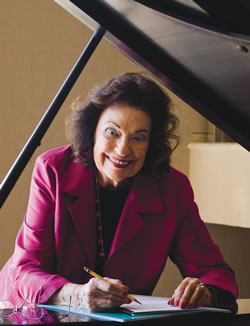 Marie Barker Nelson Bennett BA’47 MFA’52 PhD’80 is living evidence of the adage that good things come to those who wait. Bennett, now 83, studied with one of the 20th century’s pre-eminent composers—an accomplishment that was in itself a study in persistence—and then worked in relative obscurity until she was “discovered” at age 68. Since then, her music has been performed and recorded by such prominent musicians as Baltimore Symphony music director Marin Alsop, the first woman to head a major U.S. orchestra; Gerard Schwarz, currently director of the Seattle Symphony Orchestra; and noted clarinetist Richard Stoltzman. Her 20-years-in-the-making opera, Orpheus Lex, with libretto by playwright and novelist David Kranes, U of U professor emeritus of English, will be performed at New York City’s Symphony Space on February 13.

Bennett has been composing since she was about 6 years old. She grew up in a musical home; her mother, Virginia Freeze Barker, was a professional soprano who gathered her twin daughters, Marie and Marillyn, around her at the piano bench as she practiced. Bennett’s piano teachers included her mother’s professional accompanist, Becky Almond; another early influence was composer Helen Taylor Johannesen, her fifth-grade teacher. “She taught the entire fifth-grade class to sing in three-part harmony,” Bennett wrote in an autobiographical sketch. Bennett started accompanying her mother when she was about 14. “It taught me how to breathe with her—that was a big thing to me,” she recalls. “It made me sensitive to phrasing.” After receiving a bachelor’s degree in music from the U of U, Bennett wanted to study composition with contemporary German composer Paul Hindemith at Yale University. Her initial application to Yale was answered with a mimeographed rejection letter. Her twin had already been accepted into Yale Drama School, so their father, Ellis Barker, suggested Marie apply again. And again. And again.

“The rejection slips were not even signed,” Bennett recalls, even when she had enclosed a song she had written. Finally, one of the rejection notes came with a signature attached, so Barker phoned the school— “Calling New Haven was a big deal in those days; it took three hours to get through,” Bennett says—and arranged for his daughter to take the entrance exam.

“[Longtime Mormon Tabernacle organist] Alexander Schreiner tutored me in writing like Bach all summer,” Bennett says. The tutoring clearly paid off: She passed the test.

More obstacles met Bennett in Connecticut, where she says school officials refused to recognize her degree and informed her that the required bachelor’s level courses left no room for study with Hindemith. Undeterred, she asked the composer if she could audit his classes; he consented, and later gave her full credit for those courses. “He helped me graduate in two years” rather than the expected four, she notes.

“He was a complete genius,” she says of her famous teacher, whom she ranks with Igor Stravinsky and Aaron Copland among the 20th century’s leading musical figures. “He poured out his knowledge. I took a class in two-part writing and learned how to control dissonances and tonalities. It’s a very subtle thing; it gives the music more depth than average contemporary music.”

“That level of instruction really pans out” in Bennett’s music, says Stoltzman, who has recorded a sonata and a concerto by Bennett. “She learned from Hindemith and transcended his teaching, which is something a teacher really wants… . Other people who worked with Hindemith got kind of bound by his teachings and turned out music that sounds like lesser Hindemith. Marie is too wild a spirit for that.” Stoltzman says Bennett’s craft is particularly evident in her work for small ensembles. “Chamber music is very revealing when a composer doesn’t have his act together or his craft honed. You can see the seams or step in the cracks. Marie understands that.”

After returning to Salt Lake City, Bennett taught at the McCune School of Music and continued her studies in piano (with Gladys Gladstone, known as “the first lady of piano in Utah”) and composition (at the U with Leroy Robertson), completing a master’s degree, but her composing career didn’t exactly take off. She married Harlan Eugene Nelson in 1950, and the couple had four children. She continued composing, mostly for church and community groups, and in 1973, when all her children were in school full time, she decided to pursue a doctorate at the U in order to “be a real composer.” Her teachers this time included composition professors Ramiro Cortes, the first Hispanic American to have achieved international recognition in classical music; Vladimir Ussachevsky, an avant-garde electronic and acoustic music composer; and Bruce Reich, former head of the U’s composition area. While she was still studying for her doctorate, the Utah Symphony premiered her first symphony, The Medead, in 1977.

“It was kind of unusual,” Bennett says, noting that she was 47 when she entered the doctoral program, which took her seven years to complete. “If you go when you’re older, you don’t want the grade, you just want the knowledge.” Her doctoral thesis was the oratorio Once in Israel, with libretto by author Emma Lou Thayne BA’45 MA’70.

In April 1981, Bennett’s 26-yearold daughter was killed in a car crash involving a drunk driver. Less than a month later, her husband died of heart failure while hiking. She took over management of the Salt Palace Travelodge, which the couple owned, but continued composing “as an outlet.”

“It was a solace for me to have my music,” she says. In response to her loss, she wrote “Demeter” (a movement in her song cycle Song of the Goddesses) about the Greek goddess of agriculture who loses her daughter to the underworld.

Bennett’s big break came in 1994, when Boston composer William Thomas McKinley approached her about recording her music on his label, MMC Recordings. Since then, she has written seven more symphonies, five concertos, and various vocal and chamber pieces, including a trombone sonata, a “Gloria” for mixed chorus and organ, and the recently premiered trio “A Filigree of Flowers.” The latter is based on poetry by her twin sister, Marillyn, a frequent collaborator. Besides Hindemith, Bennett cites Dmitri Shostakovich, Sergei Prokofiev, Béla Bartók, and Rodion Shchedrin as major influences. “My symphonies are kind of like those [composers]; I haven’t gone far out like [Krzysztof] Penderecki,” she says.

Her 20-years-in-the-making opera, Orpheus Lex, with libretto by David Kranes, U of U professor emeritus of English, will be performed at New York City’s Symphony space on February 13.

Writing an operatic treatment of the Orpheus myth was a longtime pet project. (Orpheus is considered the greatest musician and poet in Greek mythology; his music prevented the Argonauts’ ship from being destroyed while passing the island of the Sirens. The story of his journey to the underworld to retrieve his lover, Eurydice, has inspired dozens of operas in the past four centuries.) “As a little girl, I would put away melodies and say, ‘This is for my opera,’ ” she says. About 20 years ago, after “the musical ideas from my childhood were long forgotten,” she decided it was time to write that opera. She chose Kranes as her librettist because she liked his work, though they had never met.

Initially, Bennett wasn’t sure what to do with the libretto, which reinvents Orpheus as a popular folk musician who has retired to his mountain retreat in Idaho. There is a poignant twist involving the mirrored fates of Orpheus and Eurydice. “It was too far out,” she remembers. “I put it away for a couple of years. Then one day I thought, ‘Marie, get it out. Here’s your chance; this is a lifetime dream.’ ” She chose a scene she found relatable and soon was on her way. “Now I love the libretto,” she says. “It’s marvelous.”

“She’s an extraordinary composer,” Kranes says. “What was exceptional for me, and very positive, was that she honored my text almost completely and never asked me to rewrite it to be more to her liking or to suit a musical number… . She really tuned in emotionally.”

Marie married Wallace Grant Bennett in 2003. She still gets up every morning at 5 to compose. “I start work by 6 or 7,” she says. “I sit at the piano and improvise; I let the ideas come. I’ve trained myself to accept all ideas. I take the ones I like and arrange them. “It’s really exciting to be a composer and feel like you’re breathing something new into the world,” she continues. “Almost everything I have accomplished has been since I was 50. … I wish I’d had the confidence I have now when I was younger, but you get confidence through what you do.”

–Catherine Reese Newton has written about classical music for The Salt Lake Tribune since 1990.

One thought on “In the Fullness of Time”