Building for the future.

Alum Sarah Woodhead channels her dual passions for architecture and the Middle East into a career drawing on both. 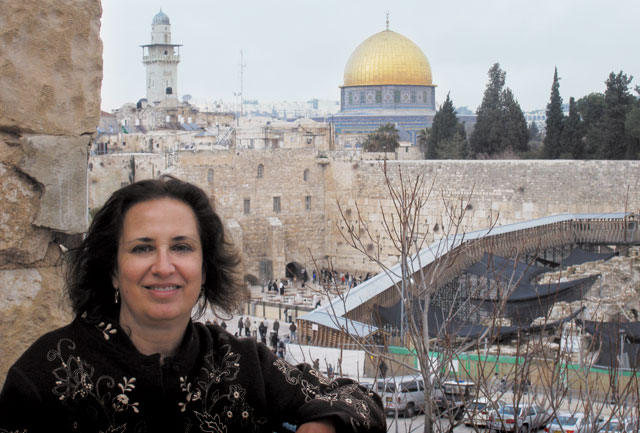 How does a young girl raised in small-town New England combine a deeply ingrained love of Middle Eastern culture with a profound interest in architecture? If that girl is Sarah Woodhead BA’80 MArch’85, she grows up to become the leader of an international consulting team that is designing and building 28 new schools—and rehabilitating 100 more—in the Kingdom of Jordan.

Woodhead works for CDM International, a private contractor overseeing a four-year, $50 million project sponsored by the U.S. Agency for International Development (USAID) to construct quality learning environments throughout Jordan. The project is providing much-needed relief to the country’s overcrowded and outdated schools. It also happens to be the perfect nexus of Woodhead’s educational background, professional expertise, and personal interests.

Woodhead’s love of the Middle East is due in large measure to her maternal grandparents, who immigrated to the U.S. from Lebanon in the 1920s. “They were from a poor village,” says Woodhead, speaking from her residence in Amman, Jordan. “They were looking for a better life, searching for the American dream.” They eventually settled in New London, Conn. Sarah was raised just five minutes away, in Waterford. The proximity allowed her to spend a lot of time with her grandparents, absorbing Middle Eastern culture.

“We ate the food, listened to Arabic music, talked about politics,” says Woodhead. “Arabic was spoken much of the time. As I got older, I asked my grandparents a lot of questions, trying to learn as much about our roots as I could.”

Woodhead also had “general discussions about geo-politics” at home with her parents—her mother was born in Massachusetts, and her father is a Utah native with Scottish, English, Danish, and Norwegian ancestry (he attended the U for a while out of high school, but left to join the Navy in WWII and continued his education through the military; eventually, he was stationed in New London, where he met Woodhead’s mother). But it was her grandparents who really triggered her lifelong fascination with the Middle East.

While her attraction to the region is easily traced, Woodhead says she has “no idea” what first sparked her interest in architecture. There was no life-changing visit to an iconic building, no family member who served as a vocational inspiration. Rather, at age 12, she simply started to sketch designs for buildings, and architecture moved straight to the top of her list of interests. 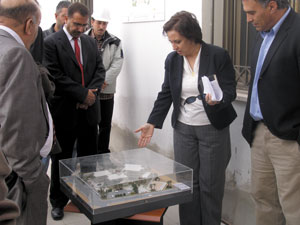 Sarah Woodhead examines a model for a new school in Aqaba, Jordan.

Still, it was culture, not construction, that brought Woodhead to the University of Utah in the late ’70s. As a freshman, she had taken an Arabic class at Syracuse University in upstate New York, and she was interested in pursuing further studies in the language and culture. But the school dropped the course the next year, so Woodhead transferred to the U to continue her education  at the respected Middle East Center, going on to receive an undergraduate degree in Middle East Studies.

Only then did she focus on architecture as a career, enrolling in the U’s graduate program. She admits that she was hesitant to jump in with both feet. “I didn’t know any architects,” she says. “I think that’s why it took me all the way to graduate school to start, because I didn’t have any role models.”

One way to find a role model is to become one yourself, so Woodhead forged ahead, paying little heed to the fact that she was a woman getting a late start in a predominantly male field. “My class was about 25 to 30 percent women,” she says. “But you could see that [female enrollment] was increasing steadily around that time.”

She recalls just one incident where her gender was an issue. She got married during graduate school—to fellow U grad Rex Nutting BA’84, who is now the Washington, D.C., Bureau chief for MarketWatch—and had a baby before her final year. “One of my male professors said, ‘You shouldn’t even be married in architecture school, let alone having a baby.’ But at that point in my life, it wasn’t going to impact me. It was just a funny story, more than anything. I really enjoyed graduate school at the U, and I think it prepared me well.”

In her current position—her official title is “chief of party” (leader of a survey party) for the Jordan Schools Construction and Rehabilitation Program—Woodhead leads a team of roughly 30 people, most of whom are men. All are from the Middle East. While she works in both a profession and a region largely regarded as male-dominant, Woodhead says she has not encountered any resistance. “None,” she says. “And it’s interesting, maybe, that I haven’t. Most of my career I’ve worked in a more male environment, and I’ve often been the boss. I have a lot of respect for everybody who works for me, and I’ve never had a problem.”

She is clearly pleased with the people she has around her and the skills they bring to the task at hand. “Jordan has a high percentage of engineers,” she says. “It’s really a well-educated country, with a very high literacy rate. And engineering is a very popular field for people to go into. They are really well trained in building practices here. This is a dedicated group, and I learn from all of them all the time. It’s a good team.”

And a busy team. Since her arrival in October of 2007, the group has completed 20 rehabs on existing schools. Sixteen more rehabs are under construction, with the last 68 now in design phase. Of the 28 brand-new schools being funded by the program, three are nearly finished, 13 are under construction, and 12 are in the bidding phase, where outside contractors vie to build the schools that CDM has designed.

It’s a large undertaking, and the need is pressing. Woodhead points out that many schools in Jordan are overcrowded, running two shifts of students every day. Others are rented facilities not intended to function as schools. And most are in poor condition. “Like a lot of urban areas in the U.S., there’s not much money for maintenance,” she says. “The schools here are very basic. They don’t have any cooling or heating, even though some areas of the country are very hot in the summer and very cold in the winter.”

A typical Jordanian school has just a few classrooms, some offices, and maybe a library. The new schools built by CDM are much different. They have heating and cooling, science labs, computer labs, and wireless and hard-wired Internet. “We are incorporating many sustainable design features, as well, like solar heating and rainwater collection,” says Woodhead.

The new schools also have a feature not often found in Jordanian schools: kindergarten rooms. “There’s a big push now to get kids into school earlier,” explains Woodhead. “The kindergarten idea is relatively new in Jordan.”
On top of that, the new schools will be some of the first in the country to be completely accessible to people with disabilities.

When rehabilitating existing schools—which are often drab, concrete buildings—the team focuses on adding classrooms and creating brighter, more nurturing environments. And that’s where the payoff comes for Woodhead. Her ultimate reward is seeing the faces of students and teachers as they move into vibrant, inviting facilities.

Of course, the job has its challenges. Chief among them is the fact that Woodhead’s husband and three grown daughters are in the U.S. (Her youngest daughter finished high school in Jordan.) She manages to spend about 30 percent of her time at home in Washington, D.C., and the family has made frequent trips to Jordan.

Despite such inconveniences, she considers herself fortunate. She has been able to indulge a love of travel throughout a region that has long had a special place in her heart. She’s visited Jerusalem, Syria, Morocco, and Turkey. And she has returned many times to Lebanon, her ancestral home, where she has connected with extended family members who still live there.

All of these experiences have given her current job an extra dimension. Surely she could design buildings in Jordan without her deep-seated connection to the Middle East. But she wouldn’t want to.

“I think my love for the culture and history infuses my work and gives it added meaning for me,” she says.

—Brett Hullinger is a Salt Lake City-based freelance writer who has written many previous articles for Continuum.