An alum makes her way back to Utah after forging a groundbreaking career in litigation communications. 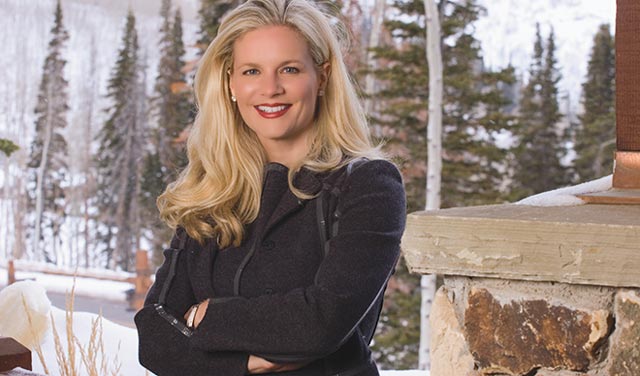 When Andy Pettitte, a New York Yankees starting pitcher with a reputation for being straight and honest, got caught up in a Congressional investigation over performance-enhancing drugs, his legal team knew that he would need help in handling the intense, nationwide publicity. They turned to Amy Van Prooyen Greenfield BA’92 MA’99, founder of the litigation communications law firm Van Prooyen Greenfield LLP (VPG). Her advice: Come clean about his two instances of using performance-enhancing substances, take the heat, and move on. The pitcher apologized to fans and teammates, and returned to the baseball field. What could have been a dragged-out public relations disaster became a difficult but manageable challenge. The pitcher emerged with his reputation and career intact, and was rewarded with a World Series ring a year later.

Greenfield’s journey into the upper echelons of the public relations profession began at the University of Utah, where she received two degrees in communication—while also indulging in her passion for skiing—before going on to become an attorney.

While providing public relations advice on newsworthy legal cases, she saw an opportunity to combine her expertise in both law and crisis communications and became a pioneer in the practice of litigation communications. In 2003, in the pressure cooker world of New York law, Greenfield founded her own firm, which specializes in providing strategic communications counsel to law firms and their clients involved in high-profile litigation. (While starting her firm, Greenfield was also starting a family: Her son was born in 2004.)

VPG now offers litigation communication, crisis management, and general public relations services from four offices, spread from New York to Hawaii, with San Francisco and Salt Lake City in between. The Salt Lake office is the newest, founded after Greenfield and her family recently moved back to Utah.

Recent issues handled by the firm include shareholder litigation, intellectual property disputes, and class action lawsuits. In 2009, her firm was awarded top honors by PR News in the “Media Event of the Year” category of its Legal PR Awards for organizing and promoting a celebrity golf tournament that raised more than $500,000 for children’s charities.

“We work with our clients to help them through their challenges and to make sure that their public relations messages complement, are in line with, and enhance their legal strategy,” says Greenfield.

Greenfield’s decision to attend the U grew out of a lifelong love of Utah, which was her only stable base during an itinerant childhood as the daughter of an Army officer, now retired Gen. Jan Van Prooyen.

“We moved around all the time,” Greenfield says. “I went to three high schools, three junior high schools, and four elementary schools. I lived all around the United States and in Germany. We came to Utah for family vacations, and I really loved it here.”

(Her Utah roots, however, go back much farther than family ski vacations to Park City and Deer Valley. Her grandfather Robert Bacchus Van Prooyen was born in, and named after, what is now the Utah ghost town of Bacchus.)

When her father was assigned as commander of the Dugway Proving Ground, Greenfield decided that the U was the place for her.

Greenfield’s interest in the legal aspects of public relations was sparked while she was pursuing her master’s degree at the U. One of Greenfield’s favorite graduate classes was media law, taught by David Vergobbi, an associate professor in the Department of Communication. From this came an interest in such law-related topics as First Amendment law, media ownership, and media regulation. During the eight years she spent studying in Utah—the longest time she had yet lived in one place—Greenfield also combined her interest in media with her love of skiing, working for a time doing radio snow reports for the Utah ski resorts.

“I had to wake up at 4 a.m. to do the snow reports, but I got free skiing everywhere,” Greenfield says.

After finishing her studies at the U, Greenfield landed a job at FHP, a healthcare provider then operating in Salt Lake City, before she moved to New York to work at the giant Fleishman-Hillard International Communications public relations firm. While there, she decided to follow her legal interests and returned to the West to pursue law school.

After receiving a law degree from the University of San Francisco, Greenfield went back to New York. But her unusual combination of interests in law and communications led her not to a law firm, but to Edelman, the Chicago-based global public relations firm, where she became vice president of its Issues and Crisis Management practice, overseeing litigation communications for Edelman New York. Her client roster at Edelman included Morgan Stanley, Johnson & Johnson, Wyeth, and Samsung, among other Fortune 500 companies.

“Many communications practitioners may find it difficult to synthesize intricate legal issues,” Greenfield says. “I was hired at Edelman because I could understand both communications and the law.”

Although she was making a mark in a very demanding field, Greenfield was looking for new challenges. So she formed VPG, which has since given her the opportunity to provide counsel on some of the highest profile cases of the day, including two of the largest bankruptcies in U.S. history, involving Adelphia Communications and WorldCom. It’s a job that entails bridging the very different mindsets of lawyers and journalists.

Says Greenfield: “Attorneys sometimes find it difficult to differentiate what works for their case in the court of public opinion versus the court of law, and that is where having a communications professional can really be valuable. The court of public opinion can be so much more damaging, and with the new media, it is critical to stay on top of communications. ‘No comment’ is a response lawyers tend to want to give the media, but it is no longer acceptable.” 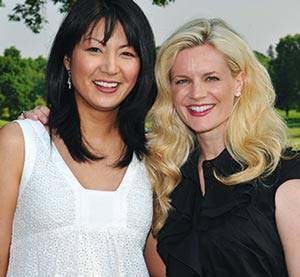 Amy with her friend and business partner Lori Teranishi BS’91 at a gala event in 2009 where they received the “Media Event of the Year” award from PR News. Photo by William Hauser

“From the beginning, I formed my company as a law firm rather than a traditional PR firm,” says Greenfield. “That allowed me to better protect client confidentiality through attorney-client privilege, which is critical when advising on sensitive legal issues. Although public relations firms can also have attorney-client privilege, it can be a gray area if protocol is not handled properly.

“When we are advising on a high-profile legal case, it is often easier for the lawyers involved to make us part and parcel of the legal team rather than many other outside players. In communications, it is so critical to be prepared in advance, so this has a tangible value for the client when we devise its media strategy.”

Typically, VPG will be brought in on a lawsuit or crisis by the law firm advising the client, rather than the client itself. This helps to maintain attorney-client privilege and also allows Greenfield to help the legal team proceed in a way that protects a client’s reputation in the media while the legal battle takes place in the courtroom.

Now, Greenfield has returned to her roots in Utah.

Amy and her husband, Van, have long owned a home in Park City. Their 5-year-old son, Shiloh, is a budding ski racer, and after deciding that Utah offered a more favorable environment for raising him than Manhattan, the family recently moved to Park City full time. Greenfield subsequently opened a VPG office in Salt Lake.
“It’s a bit like coming full circle, because I started my career path in Utah,” Greenfield says. “Now, I feel that I can offer clients the experience earned in working on high-pressure and high-profile issues in the national spotlight, and do it all in a place I love.”

Greenfield maintains connections with the University of Utah through her involvement on the U’s College of Humanities Partnership Board, and in May 2009, the college honored her as a Distinguished Alumna for her pioneering role in the field of litigation communications.

“It’s like coming home,” Greenfield says. “Utah has a great lifestyle and a lot to offer for a family with a young child, and it has a lot of culture. Plus I can do all the things I love, especially skiing.”