In recognition of the founding of the University of Utah on February 28, 1850, the Alumni Association each year presents its Distinguished Alumnus/a Award to four alumni who have contributed to society through their professional achievements, commitment to community service, and support of the University’s mission. The Association also presents the Honorary Alumnus/a Award to individuals who have sustained the University of Utah in various ways, including financially. These outstanding individuals will be recognized at the Founders Day Banquet on March 3, 2011. For more information, visit The Alumni Association.

Afesa Adams MS’73 PhD’75 is a senior research associate at the Florida Institute of Education at the University of North Florida, where she is also professor emeritus of psychology. Adams taught at the University of Florida before being recruited back to the U’s Family and Consumer Studies Department (1980-83). As associate VP for Academic Affairs (1984-89), she helped launch projects including the Days of Remembrance in commemoration of the Holocaust and the annual Martin Luther King, Jr. Day activities, among others. She was also administrator over the U’s Ethnic Studies Program, Women’s Studies, and the Center for Ethnic Student Affairs. Adams has received such honors for her commitment to education and civil rights as the Salt Lake NAACP Branch’s Albert B. Fritz Civil Rights Worker of the Year Award (1988).

Robert “Bob” Bennett BS’57 has represented Utah in the U.S. Senate from 1992 to the present (leaving office in January 2011). He has served as a senior member of the Senate Banking Committee and the Joint Economic Committee, and as the ranking Republican on the Senate Rules Committee. During his tenure, Bennett helped obtain funding for ventures including the Moran Eye Center expansion, the University Telemedicine Outreach Program, the TRAX spur to the U, and the U’s new National Center for Veterans’ Studies. He has received honorary doctorates from the University of Utah, Utah Valley University (formerly UVSU), and Snow College, among others. As a student at the U, Bennett was freshman class president, a political columnist for The Daily Utah Chronicle from 1952-53, and president of the student body in 1956-57.

Robert C. Gay BA’76 is managing director, co-founder, and CEO of Huntsman Gay Global Capital, which uses all investment earnings for poverty relief and humanitarian aid worldwide. After completing a doctorate at Harvard, Gay taught economics there for two years as a research fellow. He went into private equity in 1986, and from 1989 to 2004, served as managing director of Bain Capital, leading the firm’s expansion into Europe. He also cofounded Unitus, now one of the largest micro-credit organizations in the world. At the U, Gay is a member of the David Eccles School of Business National Advisory Board and the UTEC Board of Governors. He received the College of Social and Behavioral Science’s Distinguished Alumni Award in the spring of 2010.

Fred P. Lampropoulos ex’70, founder, chair, and CEO of Merit Medical Systems, Inc., has been in the medical device industry for almost 30 years. After serving as the chair and CEO of Utah Medical, Lampropoulos founded Merit Medical in 1987. He has invented and holds almost 200 patents on devices used in the diagnostic and therapeutic treatment of cardiovascular disease. The company now has manufacturing and distribution capabilities in Angleton, Tex.; Richmond, Va.; Galway, Ireland; and Maastricht and Venlo, The Netherlands. Lampropoulos serves on the U’s Science Advisory Board and the National Advisory Board. He has received awards including the Governor’s Medal for Science and Technology and honorary doctoral degrees from Westminster College and Salt Lake Community College, and has been inducted into the Utah Business Hall of Fame.

Eugene “Gene” England and William “Bill” England are part of a local family business—C.R. England—that has thrived ever since its humble founding in 1920. Gene and Bill’s father, Chester R. England, established the business to haul milk from dairies in northern Utah. The boys were raised in the business and, after service in WWII, helped grow it into one of the largest trucking companies in the nation. Gene served as president of C. R. England from 1961 and into the early 2000s and is now president emeritus. Until recently, Bill was the longtime chair of the company’s board, as well as an active member of the Utah Trucking and American Trucking associations. The England brothers continued to operate C.R. England well into the 1980s, when they gradually began to transfer control of the business to their sons and grandsons. C.R. England has been a major supporter of the University. In 2007, Eugene and William England were inducted into the David Eccles School of Business’ Hall of Fame.

John Bennion BS’61 MA’62 (and a Ph.D. from The Ohio State University) is a former clinical professor of urban education and educational leadership at the U and previously served as superintendent of several school districts, including Salt Lake City and Provo.

Carolyn Beal Kump BS’53 is an educator who taught school in San Diego and Palo Alto, Calif., and later served as a member of the Salt Lake City Board of Education for 12 years. 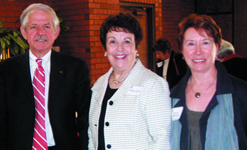 Gilbert A. Fuller BS’66 MBA’67 is a retired corporate finance executive and currently serves on the Board of Directors of USANA Health Sciences, Inc.

Janice White Clemmer PhD’79 PhD’80 (and a J.D. from BYU) is a retired tenured faculty member at BYU-Provo. She is the first Native American (Wasco-Shawnee-Delaware) female to hold three doctorates.

Harriet R. McDonald BS’62 PhD’83 was a speech-language pathologist in the Murray and Salt Lake school districts until retiring in 2005. 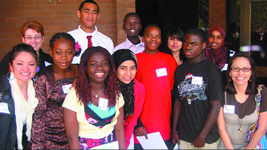 EAB Scholarship recipients with some of their mentors.

A few lucky students from Bryant Middle School in Salt Lake City are the recipients of a unique scholarship, established in 2010 through a generous donation by former EAB member John Piercey BS’52 JD’58. As a result, nine $5,000 scholarships have been awarded to Bryant Intermediate School 8th-graders who participated in the EAB tutoring program in 7th and 8th grade and were identified by their tutors and teachers as showing promise as potential college students. The general expectation is that the scholarship recipients will eventually attend the U of U.

The first group of prospective scholarship recipients, along with some of their teachers and mentors, visited the U of U campus last spring.

Each year, the Alumni Association’s Emeritus Alumni Board (EAB) presents five emeritus alumni (those who left the U at least 40 years ago) with its prestigious Merit of Honor Award in recognition of their outstanding professional achievements and service to the community. The following five outstanding individuals were honored at the Merit of Honor Banquet on November 4, 2010.

Bruce Bell BA’62 is the quintessential “Utah Man,” having supported the University in various ways, especially athletics, volunteering in various capacities and offering extensive pro bono marketing services for more than 30 years. (He is also credited, along with Tom Barberi, in beginning the U’s tailgating tradition.) Bell has spent his adult life in PR, beginning at KALL Radio, and eventually establishing his own advertising and marketing firm, Bruce Bell & Associates. He has served as a member and former president of the Salt Lake Acting Company board, and on both the Utah Arts Festival Board and the Salt Lake City International Jazz Festival committee since each program’s inception. He also developed “Fit Kids,” an award-winning health and fitness program for Utah’s elementary school children. He received the Silver Gavel Award for Public Information Campaign in 1978.

Harold G. Christensen AB’49 (and J.D. from the University of Michigan) served as deputy attorney general of the United States during both the Reagan and George H.W. Bush administrations. Before that he was chair of the board of Snow, Christensen & Martineau, a Salt Lake City-based law firm, which he rejoined as Of Counsel. He has been a visiting professor of law at the University of Utah; the University of California at San Francisco; and Bond University, Queensland, Australia, and has served as chief of the litigation division of the Office of Utah Attorney General. He is a member and served as president of the Salt Lake County Bar Association and the Utah State Bar, which recognized him as Lawyer of the Year in 1984.

Suzanne Forsberg BMus’62 (with an M.A. from Harvard and a Ph.D. from NYU in historical musicology) is a professor at St. Francis College in Brooklyn, N.Y. She has a broad range of expertise in music of the eighteenth-century. In addition to co-authoring a volume in the Garland Series The Symphony 1720-1840, she has contributed articles to such publications as The New Grove Dictionary of Music and Musicians. As the recipient of a Woodrow Wilson Fellowship, she conducted research in Europe and has served on the board of the international Society for Eighteenth-Century Music. Since 2003 she has participated as a Speaker in the Humanities program, sponsored by the New York Council for the Humanities. She is the founder and director of Concerts at Half-Past Twelve, a series serving St. Francis College and Brooklyn.

Cecelia H. Foxley MA’65 PhD’68 has held faculty and administrative positions at the University of Minnesota, the University of Iowa, and Utah State University, and at the end of her career was a Regents Professor in the U’s Department of Educational Psychology. She was the first woman to serve as associate commissioner for academic affairs, then deputy commissioner, and ultimately commissioner of the Utah System of Higher Education and CEO to the State Board of Regents. She has co-authored six books and several journal articles on education, and has received many awards and accolades including an honorary doctorate in education from Utah State University (2007), the U of U College of Engineering’s 2010 Outstanding Service Award, and the U of U College of Education’s 2010 Distinguished Alumni Award (the college’s first).

James L. Parkin BS’63 MD’66 completed his residencies in both general surgery and otolaryngology at the University of Washington. In 1972 he returned to Utah to practice medicine. For 25 years he held positions in the U of U School of Medicine as a faculty member, researcher, administrator, professor of surgery, and chair of the Division of Otolaryngology—Head and Neck Surgery (1974-1992) and chair of the Department of Surgery. He also served as associate vice president for Health Science (1996-1997). Parkin has been a visiting professor at universities and medical institutions around the world and has an extensive list of professional publications to his credit. He has received the Presidential Citation from the American Otological Society in recognition of his work in the development of cochlear  implants.

A demonstration of WET’s water-fire technology. 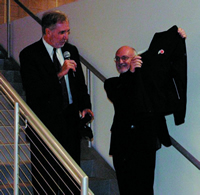 President Michael Young presents a U of U jacket to WET Design CEO Mark Fuller, host of the evening’s event.

Mark Fuller HBS’76, WET® (Water Entertainment Technologies) founder and CEO, hosted fellow University of Utah alums for a reception and tour of his award-winning water entertainment design company in Sun Valley, Calif., this past October. With its performing fountains, magical fire and ice effects, and jets that shoot water more than 500 feet in the air, WET Design continues to be at the forefront of water-feature design and technology. Fuller’s company has created more than 100 fountains in countries around the globe including the 2002 Winter Olympic Cauldron, the Bellagio fountain in Las Vegas, and, most recently, the $90 million fountain in Dubai.

More than 130 alumni and friends turned out for the event, beginning with a reception and remarks from both U of U President Michael K. Young and Fuller. President Young was happy to point out the $450 million in research funding that the U has received, which, along with many other achievements, he noted, places the University rightfully beside other Pac-12 institutions. In turn, Fuller recalled the exceptional experiences he’d had as a student at the U, where he encountered “acres of opportunities and a passion for learning,” for which he credits his professional success.

In appreciation of his hosting the event, President Young presented Fuller with a U of U jacket. Guests were then given a tour of the facility, which included a display of water and fire being hurled into the air to create fantastic patterns, for which the company is renowned, and an inside view of the various departments responsible for the engineering technology that facilitates the creation of such innovative—and beautiful—waterworks.