U of U Alumni Form Clubs in China, India, and Taiwan 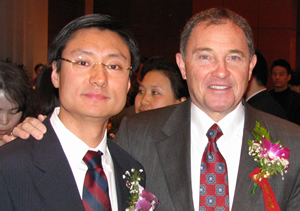 Raymond Quan, left, the president of the U of U’s China Club for alumni, met this past April with Utah Gov. Gary Herbert at a reception in Beijing when the governor visited China with a trade delegation.

University of Utah graduates in China, India, and Taiwan have formed alumni clubs this year. The aim of the clubs is to help graduates maintain ties to the U and to other alumni from their home countries.

Before the three new clubs were created, the U had only one other international alumni group, the Utah Europe Association, which was started in 1998.

The international alumni hope to use the new clubs to reach out to U students from their home countries, as well as U of U graduates who are returning. The alumni work closely with the U’s International Center to host distinguished visitors to their region and assist in representing the U at events in their home countries. The alumni clubs also plan to hold reunions and events of their own.

The China Club was established this past February. Raymond Quan LLM’01, the president of the China Club, holds a master of laws degree from the University of Utah. An international lawyer, he has been admitted to the bar in both China and New York, practicing law with leading Chinese and international law firms. Currently, he is a senior counsel of a large Chinese law firm and serves as an executive director of a consulting company in Beijing.

“The establishment of the China Club of U of U alumni is by all means the most exciting news at the beginning of 2011 for all Chinese alumni of the U,” Quan said in his welcome letter to the club members. “With its establishment, we have a ‘home’ in China.”

Carol Qiu MS’07, the secretary of the China Club, graduated from the U with a master’s degree in management of parks, recreation, and tourism. She now works as a strategic sales manager for American Express Business Travel in Shanghai, China.

Qiu and Quan both say they are excited about the opportunity to meet other U of U alumni in China. This past April, Quan met with a group of U alumni and fans, as well as Utah Gov. Gary Herbert, when the governor visited Beijing with a trade delegation from the state.

The India Club was established in May 2011, drawing together U of U alumni from India who live there and in the United States. Anurag Ghatole MS’09, who graduated from the U with a master’s degree in civil and environmental engineering, is the president of the India Club. Ghatole lives in Hyderabad, India, and works as lead structural engineer for FLSmidth.

The alumni club’s formation was spurred by Varun Gowda MBA’09. In 2008, Gowda started working with the U’s International Center on international alumni development, and he helped establish the University’s International Alumni Project.

Gowda works at the U’s Energy & Geosciences Institute as a project leader specializing in geothermal energy. Vyas is a postdoctoral researcher at Stanford University, working with Dr. Kim Butts Pauly on developing techniques for using magnetic-resonance imaging to guide procedures such as surgeries.

Sinha works for Hewlett-Packard in Bangalore as a vice president of marketing analytics. Tyagi runs his own company, HAIM R&D, which specializes in health and environment economics and survey research. The company is based in Ghaziabad, near New Delhi.

The Taiwan Club for University of Utah alumni was established this past May. Jow-Lay Huang PhD’84, who is from Tainan, Taiwan, is the club’s president. He graduated from the U with a doctorate in materials science and engineering. He is now a professor of materials science and engineering at National Cheng Kung University, in Tainan, specializing in ceramics and thin film technology.

The alumni club’s secretary is Wen-Bin Liau PhD’89, who graduated from the U in chemical engineering. He now works as a professor of materials science at National Taiwan University in Taipei.

Huang and Liau kept alive the U spirit by getting together with a group of Utes every year in Taiwan, and with the formation of the new alumni club, they expect to continue those meetings and plan more events. 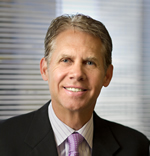 Keven M. Rowe BS’83 JD’86, president of the University of Utah Alumni Association’s Board of Directors, says that during the academic year ahead, he wants to keep the alumni involved and up to date as the University navigates new territory with the selection of a new U of U president, as well as the institution’s entry into the Pac-12.

Rowe took the helm of the Alumni Association’s board on May 11, at the Association’s Annual Board Meeting. Heidi Makowski BS’83 became vice president, and three of the board’s four affiliated groups also welcomed new presidents.

Rowe, a managing partner of the law firm Jones Waldo, has served three years as a member of the Alumni Association’s board. He has been chair of Kingsbury Hall’s advisory board and a member of the University’s Health Sciences Advisory Board.

Makowski, the new vice president of the Alumni Association’s board, also has been a member of that board for the past three years. She is director of development for the U’s College of Fine Arts. 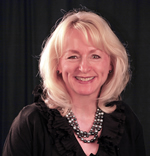 Three of the Alumni Association board’s affiliates also have new leaders. The Emeritus Alumni Board has chosen Carolyn Kump BS’53, who has had a long career in K-12 education, as its new president. Josh Bradley BA’98 MD’02, a physician, will serve as president of the Beehive Honor Society Board. And Sam Haslam, a senior at the U whose major is exercise physiology, will lead the Student Alumni Board.

Jessica Peterson BA’00 BFA’00 MPA’05 joined the staff in May. As director of marketing and development, she is overseeing alumni membership, marketing, and fundraising.

Peterson has been a nonprofit fundraising professional for seven years. She has worked for the Make-A-Wish Foundation of Utah, Girl Scouts of Utah, and most recently, the Utah Museum of Fine Arts, where she oversaw the largest annual membership increase in UMFA history. She holds a master’s degree in public administration, and bachelor’s degrees in communications and ballet from the University of Utah.

Julianne Basinger BA’87 MA’91 joined the UUAA staff in May as director of alumni publications and managing editor of Continuum.

Basinger is an editor, reporter, and media-relations specialist with 20 years of experience. Most recently, she was a news and business editor at the Deseret News for four and a half years. Before moving to Utah, she spent eight years as a national reporter and special-projects editor at The Chronicle of Higher Education, in Washington, D.C. She has also worked for the Associated Press and Reuters.

As the new marketing manager for advertising sales and event sponsorship at the Alumni Association, Bill Lines BS’83 has come full circle since graduating from the U of U with a degree in journalism and communications.

His career path took him to KUED-Channel 7 as a documentary line producer, and then four years at KSTU-TV20 as a production manager and talk-show host. He went on to work for companies including Video West, KSL television’s film and video production arm; American Stores Corp.; and TeleScene, KUTV-Channel 2’s film/video production arm.

Lines moved on to become the director of sales and marketing for graphic design/branding legend Randall Smith in Salt Lake City and then worked for Site Utah and Newsletters Ink.

U of U Alumni in Europe Meet in Portugal for Reunion 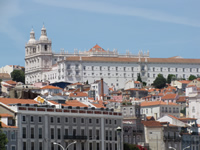 U of U alumni from Europe enjoyed the old architecture of Lisbon during a reunion in June that also featured updates from University of Utah officials.

University of Utah alumni from Belgium, Germany, the Netherlands, Portugal, and Romania—including me, the U’s international alumni coordinator—met for a reunion in Lisbon on June 12 and 13. The alumni were happy for a chance to spend time together and to get an update about the U from Barb Snyder, the University’s vice president for student affairs; Kirk Jowers BA’92, director of the U’s Hinckley Institute of Politics; and me.

The reunion was organized by the Utah Europe Association, the University’s first international alumni group. The European alumni have held a reunion to celebrate their U of U roots every year since 1998, when their first gathering was in Heidelberg, Germany.

Gohar Stepanyan MBA’04 is the Utah Europe Association’s president. She now lives in Lisbon, Portugal, where she is an assistant professor of international finance at the Catholic University of Portugal. She coordinated and planned the 2011 reunion in Lisbon for the U of U alumni. 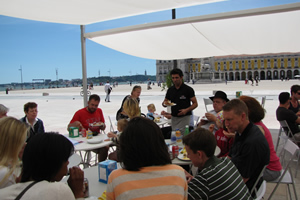 Kirk Jowers, director of the U’s Hinckley Institute of Politics (seated at right in a black T-shirt), eats lunch with University of Utah alumni from Europe at an outdoor cafe in Lisbon.

The group of 24 people met on June 12 at the main entrance of Lisbon Oceanário, an oceanarium that was the centerpiece of the 1998 World’s Fair. We had lunch in Commerce Square (Praça do Comercio) in the old part of the city and took a boat ride to enjoy Lisbon from the Tagus River.

The official dinner was held at Sofitel Liberdade in Lisbon. Snyder started the night with an update about the latest U of U developments. I told them about the International Center’s efforts and international alumni development. And Jowers took us around the world talking about the Hinckley Institute’s interns. 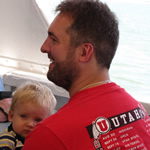 Bjoern Tharun BS’02, a U of U alumnus from Germany, holds his son Vincent during lunch.

On June 13, the alumni group met at Praça de D. Pedro IV TrainStation, also known as Rossio Square, ready to visit Sintra. We enjoyed our day by walking around the city, including a visit to Quinta da Regaleira, located near the historic center of Sintra and classified as a World Heritage Site by UNESCO.

We finished the reunion with an informal get-together in Praça da Figueira (Figueira Square), eating Portuguese food, enjoying the atmosphere of old Lisbon, and talking about possible locations for next year’s reunion.