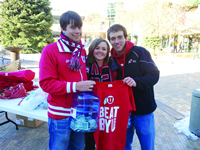 The University of Utah swept the annual Utah-BYU Rivalry Week Food Drive last November, with record-breaking results for both food and funds. The competition was particularly driven this year for two simple reasons: Thousands of Utahns needed assistance, particularly as the holidays approached, and, since the U is moving into the Pac-12, the competition would be the last held in November, capping the football season. Both schools wanted to finish with a bang—and they succeeded.

“We were absolutely overwhelmed with both the response and the generosity of Utah fans everywhere who supported the Rivalry Week Food Drive,” says U of U Alumni Association Community Service Committee chair Greg Anderson BS’76. 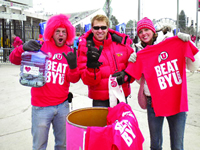 How did it happen? Students, alumni, and other volunteers rallied like never before. Food and monetary donations were collected at local grocery stores by members of the Student Alumni and MUSS boards. Many Alumni helped raise money and collected food at their businesses. Beat BYU T-shirts were hawked at the U’s Campus Store and outside Rice-Eccles Stadium. And fans donated more than $7,000 outside the gates of the stadium before the rivalry game on November 27.

“The competition with the Cougars makes it fun, but the joy comes in seeing the shelves at the Utah Food Bank fill up with more than 352,000 pounds of food, and knowing that the food bank can now purchase hundreds of thousands of pounds more, thanks to the $93,000 contributed by loyal Utes, much of it a dollar at a time,” says Anderson. “We especially recognize the exceptional work of the U of U students whose enthusiasm was the driving force behind this year’s Rivalry Week campaign. What a team!”

“A few years ago, BYU would just pound us in food collection, while Utah would win the money competition,” says John Fackler BS’89 BS’94 MPrA’95, Alumni Association director of alumni relations and overseer of the Student Alumni Board. “We decided that wouldn’t continue to be the case, and with the support of committed alumni and students, Utah has now won the food donation competition the last three years.”

The growth in food collection comes from coordinating the efforts of various student organizations. MUSS Board Coordinator Brynn Whitchurch BA’05 says, “The students’ enthusiasm is contagious. That was definitely evident in this year’s results. It’s amazing to see how dedicated the students and the University of Utah community have been in helping feed Utah’s hungry.”

The ultimate winners of this annual friendly competition, as always, are those in need in the local community.

Utes Around the World

How does the University of Utah keep in touch with its numerous international alumni, teachers, and scholars who have studied, conducted research, and taught at the U but are now spread around the world?

Thanks to technological innovation, that task is much easier than it once was; almost instantaneous transcontinental communications are widely available, even in the most remote parts of the planet. 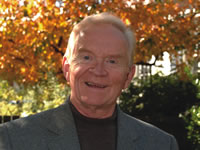 But what about collecting, assembling, and tailoring the data (to interface with the U’s established data storage systems) in order to maintain contact with such a widespread and diverse population? That daunting task was undertaken by the International Center (IC), under the supervision of the center’s longtime director Bill Barnhart MS’71.

A pivotal point of the project involved revamping the IC’s Web site to expand Web page categories and encourage interaction. The revamped site, coordinated by Louise Shingleton, now includes separate sections for International Contacts and Clubs—providing a world map that spotlights U of U representatives in various regions of the world—as well as the online community ULink (in collaboration with the Alumni Association), a new internationally oriented magazine (Unbounded), published by the Undergraduate Studies office and accessible online in a flip-page format, and a wide variety of student-focused pages intended to ease foreign students’ entry into a different culture and educational system. 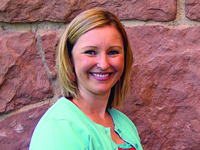 Every year, the Utah-European Association hosts an alumni reunion in a European city that attracts dozens of alumni and guests representing various countries. The goal is to provide a social environment where European alumni get to know one another, exchange ideas, provide feedback to U of U administrators, and stay in touch with each other—keeping alumni spirits and enthusiasm high. The 2010 reunion was held May 22-23 in Mainz, Germany, with special U of U guest Kim Wirthlin BA’86 MPA’02, associate vice president for marketing and communications at Health Sciences. The 2011 event will take place in Lisbon, Portugal, on June 12 and 13. The Utah-European Association hopes for an increase in alumni participation and receives active assistance in promoting the event from the International Center.

All of these expanded efforts are intended to extend the University’s reach into the international community and to keep those once associated with the U tuned in and interested in the school’s future.

Says Barnhart: “There’s a wealth of intellectual talent out there with connections to the University of Utah, and we feel that it’s essential to tap into those resources.”

Adds Divricean: “International researchers/scholars and exchange students may not have a degree from the U, but they sure make great Utes!”

Each year, about 450 international students graduate with a degree from the U, and the U hosts around 500 international researchers, scholars, and exchange students.

As for the future, projects include opening international clubs in China, Taiwan, and India, where there are large numbers of U of U alumni. The IC will also work to give a boost to the Utah-Europe Association by helping to increase the number of contacts and establishing U of U representatives in more European countries.

For more information about these and other initiatives, check out the IC’s revamped Web site.