The Alumni Association is pleased to welcome four new members to its Board of Directors this year. The board is composed of 24 alumni volunteers who oversee the activities of the four other affiliated groups: Emeritus Alumni Board (EAB), Young Alumni Board (YAB), Student Alumni Board (SAB), and Beehive Honor Society Board (BHS). Their mission is to support the University of Utah’s pursuit of excellence by forging and preserving lifelong relationships with alumni, students, and the community.

Sheryl Allen BS’65 MEd’90 is well-known in Utah, having served in the State House of Representatives since 1994 and because she is currently running for office as lieutenant governor beside Salt Lake County Mayor Peter Corroon. Over the years she has been involved in numerous educational projects in the Davis County School District, where she is currently the district’s special projects director. She has been a member of several working boards, both at the University of Utah and in the local community, and has been recognized with a variety of community awards, including the National Legislator of the Year Award from Americans for the Arts and the Utah Arts Council Governor’s Recognition for Achievement, among many others. Sheryl is married to John C. Allen BS’64, who played on the U of U basketball team in 1962-1963. Sheryl notes that three of their four children, as well as her parents, all graduated from the U. “My blood proudly runs crimson red,” she says.

Geoffrey H. Lee ex’86 is vice president, affiliate relations, at vehix.com. Geoff has more than 15 years of sales and marketing experience in advertising and professional services. He served as advertising director for Skiing Utah magazine from 1986 to 1988, when he joined American Lawyer Media in Dallas, Texas. AmLaw is the world’s foremost legal media giant, whose myriad holdings included Court TV and American Lawyer Magazine. In less than two years, Geoff was responsible for doubling advertising revenue for AmLaw’s Texas region. In 1990 he joined Fox-Morris, a large national recruiting firm, to establish the company’s legal search division. He consistently ranked among the company’s top producers nationally. Geoff founded Counsel Source, Inc., a full-service attorney search firm, in 1995. In a few short years, he built the company into a multimillion-dollar business. Geoff is married to Diane M. Krogh Lee ex’89.

Keith Wallace BS’72 is senior vice president and CFO with trucking company C.R. England, Inc. While a student at the U, Keith became a member of the Sigma Chi fraternity and joined the Utah National Guard, serving as a captain from 1970-77. A certified public accountant and certified financial planner (as well as a licensed real estate broker in Utah with experience in real estate development), Keith joined C. R. England in 1993. Since leaving the U, he has been involved with the David Eccles School of Business Alumni Board and the national advisory council for the business school’s Pierre Lassonde Entrepreneur Center. He has also served as a member of the U.S. Bank board of advisors. Keith has helped grow C.R. England into a $1 billion business encompassing more than 35 different operating units. Utah Business magazine recognized Keith in 2010 as one of its CFOs of the Year. Keith is married to the former Carol Callister BS’70.

John Youngren BA’88 is vice president, strategic communications, with the full-service ad agency Love Communications, serving as both head of the agency’s public relations team and its senior account supervisor. John has long juggled multiple roles. As a student, he began working in advertising with Harris & Love and spent a year as editor-in-chief at The Daily Utah Chronicle. He joined the Ogden Standard-Examiner, where he was a sportswriter and columnist (1988-95), and served as corporate communications manager with Regence BlueCross BlueShield (1990-95). He then spent a year as creative services director for a cable media company before rejoining Harris & Love as vice president and group account director (1996-2001). In the mid-late 1990s, he also spent several years as a television columnist for The Salt Lake Tribune and the Standard-Examiner. John has been widely involved with the U since his graduation, serving the Beehive Honor Society Board (1992-95), the Young Alumni Board (1996-2000), and the Publications Council (1995-97 and 2006-08). He is also a regular contributor to this magazine. 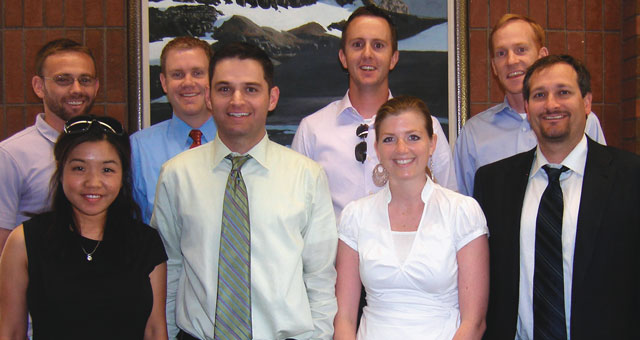 UUAA President Michele Mattsson Recognized as a “Woman to Watch”

Michele Mattsson HBA’85 JD’88, currently serving the last year of a three-year term as president of the University of Utah Alumni Association (UUAA), was highlighted last spring in Utah Business magazine (April 2010) as one of “Thirty Women To Watch”—meaning those women who, in striving for professional excellence, are helping shape and move forward Utah’s business community.

As chief appellate mediator for Utah’s Court of Appeals, Mattsson functions as a kind of referee between parties, helping them understand what’s at stake and how to negotiate a mutually acceptable resolution as an alternative to costly and time-consuming litigation. She has mediated hundreds of cases since her appointment in 2001 and describes her work at “intense and emotional, yet rewarding.”

Michele has applied that same set of analytical and people skills as president of the Alumni Association—and, as such, as a member of the Board of Trustees. Always prepared, ever enterprising and unflappable, Michele has guided the Association’s Board of Directors for the past two-plus years with skill and aplomb. Within the Alumni Association, she is also well-known (and appreciated) for her thoughtfulness by presenting delicious homemade treats to staff members on their birthdays. Given her demanding work schedule and multiple community obligations, it’s clear that she is also an expert at time management.

Michele is married to Ben Wilson HBA’87 JD’90, and they have two children. 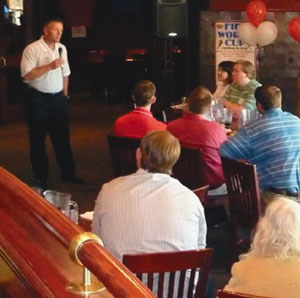 “Energetic” is the best word to describe the launch of the U’s newly formed Boise Alumni Chapter. Held June 18 at Legends Pub & Grill in Boise, the event attracted around 50 eager alumni who gathered to hear Head Football Coach Kyle Whittingham reveal his expectations for the upcoming season. And since the chapter’s inauguration took place just one day after the announcement of Utah’s move to the Pac-10 conference, many of the audience questions involved what the future might hold after the 2010 season. Whittingham responded to the Pac-10 questions, but he also reminded the crowd that he and his team were currently focusing on the 2010 season and the opening game against Pittsburgh on September 2.

Also on hand were Manni Hendrix BS’94 MS’04, the U’s director of athletic relations, and former Ute football standout Jordan Gross BS’02, now an All-NFL and Pro Bowl offensive tackle with the Carolina Panthers. Gross, who grew up in the Boise area and spends much of the off-season there, attended the luncheon with his wife, Dana (BS’03). He spoke about the scholarship he recently endowed to University of Utah Athletics, explaining that he wanted to give back to the University and encouraging all in attendance to do the same.

“I enjoyed meeting our terrific alumni and fans in Boise,” says Whittingham. “Having former player and loyal Ute Jordan Gross join us was an added bonus.” Boise Chapter President Wayne Slaughter BS’97 and the chapter board played a key part in organizing the event. “We have a great group of more than 1,500 alumni in the Boise area. Having Coach Whit come to the heart of Boise State country was a great way to kick off the chapter,” says Slaughter, noting that the new chapter is looking forward to continuing the momentum. “We hope to present a wide variety of alumni events in the future to involve as many alumni as we can.”

For more information about upcoming events in Boise and in other chapters throughout the country, go to www.alumni.utah.edu and click on “chapters”; or contact Kevin Stoker at kevin.stoker@alumni.utah.edu or (801) 581-3966. 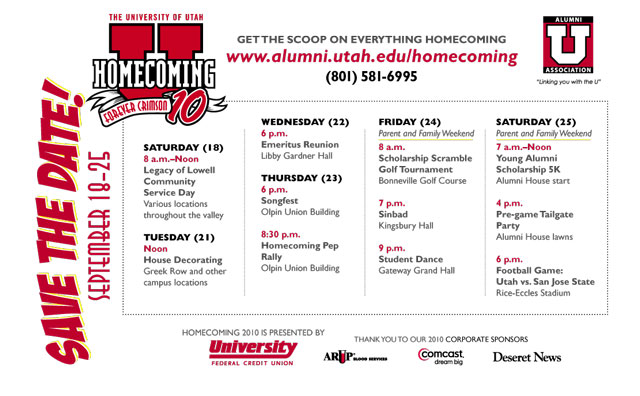 With his extensive record of involvement with the University of Utah over the past few years, Kevin Stoker BS’06 MBA’09 is a perfect fit as the Alumni Association’s new advancement coordinator. In this role, he heads up a multitude of regional and alumni chapter initiatives across the country, including the launch of a new Boise, Idaho, chapter this past summer (see opposite page for details).

As a student, Stoker plumped up his budding résumé as a member of The MUSS, serving as president of both the Football and Basketball MUSS groups. He was also a member of the Student Alumni Board, where he pitched in to help with Alumni Association events such as Homecoming, the annual Utah/BYU Rivalry Week Food Drive, and the student end-of-the-year House Party.

After graduating from the U with a bachelor’s degree in parks, recreation, and tourism (with a sports management emphasis), Stoker promptly went to work for the University of Utah’s Athletics Department—first as director of Group Sales/Community Relations (2006-07), and then as assistant director of the Crimson Club Annual Fund (2007-10). At the same time, he managed to get his MBA, with an emphasis on management and marketing.

Off-campus, Stoker has been a volunteer with Camp Hobe, an annual camp for kids with cancer in Utah, Wyoming, and Idaho, for the past eight years. There, he assists with planning, volunteer recruiting, and fundraising.

Alumni Association Executive Director M. John Ashton BS’66 JD’69 says: “Kevin has extensive and valuable experience with athletics, development, and Alumni Association boards. That among other things has made him an important addition to our staff from the outset. We’re very glad to have him here.”

Alumni chapters will benefit by taking advantage of Stoker’s organizing and communication skills, knowledge of sports, and keen sense of PR and marketing.

Stoker is also an avid participant in sports and any activity related to the great outdoors. “I try to be outdoors as much as possible—hiking, camping, fishing, and hunting in the spring, summer, and fall, and snowshoeing in the winter,” he says. He is currently training for his second triathlon and has recently added a new activity to his repertoire—canyoneering. He tries to take a few trips each year to Zion National Park to hone his skills. Look for a red T-shirt on one of Zion’s sheer walls.

With increasing numbers of University of Utah alumni looking to enter the job market, our Alumni Career Services (ACS) program has been reformulated as a value-added benefit to membership in the Alumni Association. The new program offers job seekers unprecedented access to a career coach, a job board where professional positions are posted daily, and a variety of specially tailored workshops. Access to these offerings is now a free benefit of membership in the Alumni Association.