Founders Day traditions date back to 1899, when the Utah State Legislature voted to move the University of Utah to its present location on Salt Lake City’s east bench. The event coincided with the University’s founding on February 28 and inspired a celebration that continues to this day.

In honor of the founding of the U, the Alumni Association each year presents four (or occasionally, as this year, three) Distinguished Alumnus/a Awards to U of U alumni in recognition of their outstanding personal and professional achievements. An Honorary Alumnus/a Award is also given to an exceptional non-U of U graduate who has supported the University of Utah in its mission. The following recipients of the 2010 awards were recognized at the annual Founders Day Banquet on February 24:

Larry D. Gluth BS’83, a former vice president with Starbucks, is currently senior vice president of the U.S. and Canada area office for Habitat for Humanity International, as well as vice chair of the U of U’s National Advisory Council.

M. Elizabeth Hale Hammond BS’64 MD’67, medical director of the Office of Research for Intermountain Health Care, is a U of U professor of pathology, a former professor at Harvard, and an internationally known expert in transplantation pathology.

Robert A. McDonald MBA’78, president, CEO, and chair of the board of Procter & Gamble and a member of the David Eccles School of Business National Advisory Board, graduated in the top 2 percent of his West Point class and served as a captain in the U.S. Army for five years before joining P&G.

Due to unavoidable circumstances, Fred P. Lampropoulos ex’70, founder of Merit Medical Systems medical device company, was unable to participate in this year’s Founders Day celebration. He will be honored in 2011.

Marta S. Weeks-Wulf, an Episcopal priest, is a civic leader and philanthropist whose generosity includes gifts to the College of Mines and Earth Sciences toward construction of the new Frederick Albert Sutton Building, named in honor of her father, a noted field geologist.

The Alumni Association wishes to express its appreciation to the Founders Day 2010 primary sponsors: Deseret News and the Episcopal Diocese of Utah. 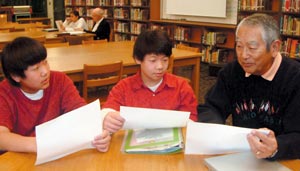 Emeritus Alumni Board (EAB) members have been busy for the past couple of years. In addition to participating in Reality Town and Career Fair Day (covered in the Fall 2009 issue of Continuum), many members have also volunteered in a tutoring project taking place at Bryant Intermediate School.

A significant number of Bryant students are just learning English and often come from home environments where income is limited and the parents don’t speak English. In fact, there are some 30 different languages spoken at the school. The lofty goal of the EAB’s effort is to assure that these middle school students are prepared to continue their education successfully through high school and, hopefully, beyond.

Teaching students to read English was—and is—the project’s primary goal, although a few tutors also work with students in elementary math. One-on-one tutoring sessions are typically conducted once or twice a week during 45-minute class periods. Volunteer tutors are coached in the strategies to help students learn to read or to read better.

Last spring, 15 volunteers tutored 18 students on a weekly basis. Currently, 25 tutors have signed up to assist in the project during 2009-10. Most of the tutors are emeritus alumni, including four from the EAB. Bryant teacher Michelle Stimpson BA’00 MEd’03, who tutors limited English-speaking students, reports that the students made impressive progress last year in improving their reading skills and vocabulary.

The coordinator of the Bryant School projects, including Reality Town and Career Fair, is John Bennion BS’61 MA’62, an educational consultant and coordinator of a statewide Novice Teacher Research Study, whose expertise in education has proved invaluable to the effort. EAB member Carolyn Kump BS’53 is responsible for recruiting volunteer tutors this year.

“It is a very rewarding experience, especially since the students are so eager to learn and appreciate the help they are receiving,” says Bennion.
In the end, both students and volunteers are the beneficiaries of a really good idea brought to life. 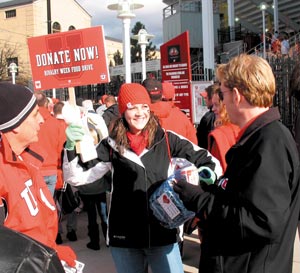 The University of Utah may have lost to BYU in its last encounter on the gridiron, but the U swept the 2009 Rivalry Week Food Drive in both food and funds donated—to the benefit of hungry families in Utah.

“The Rivalry Week Food Drive brings an added dimension of fun and competition to game week,” says Ann Bardsley BA’84, chair of the Alumni Association’s Community Service Committee. “But the best part of the food drive is that through the combined efforts of the alumni associations at the U and BYU, increased numbers of people are served by the food pantries this season.”

Many groups played a part in the competition. Members of the Alumni Association Board of Directors and the SAB placed hundreds of food barrels around campus
and throughout the University community. The Campus Store alone raised more than $10,000 through the sale of Rivalry Week T-shirts and another $4,000 from Block U cards at $1 each.

Says John Fackler BS’89 BS’94 MprA’95, director of Alumni Relations and coordinator of the SAB, “The Utah Food Bank estimates that each dollar donated can be turned into 12 pounds of food, which would mean that we raised the equivalent of 1,386,000 pounds of food through monetary donations!”

All food and funds collected go directly to Utah food banks to be distributed to needy families across the state. 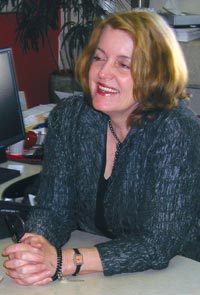 Julie Swaner’s specialty is not only helping unemployed people find jobs, but also keeping them focused and their spirits up. The challenge quotient to Swaner’s job has risen dramatically over the past year or so, no thanks to the economic upheaval experienced throughout the country and around the globe beginning in late 2008. While Utah is in better shape than most other states—at this writing, unemployment nationwide is hovering around 10 percent, while in Utah it’s pegged at 7 percent, according to the Bureau of Labor Statistics—the jobless numbers are high enough to keep her hopping. Continuum asked Swaner to provide an update on how her office has been handling the rush.

As manager of Alumni Career Services (ACS), you have no doubt seen an increase in alumni coming to you for help in finding a job due to the economic downturn. How has this affected your workload?

The huge increase [in jobless numbers] started around October 2008 and continued through August 2009. The good news is that the largest proportion of those who were laid off in the early round have since found employment. However, some individuals have been out of work for a year or more because their particular industry was especially hard hit. Yes, my workload has increased substantially over the past year and a half.

Last fall, you reinstituted ACS’s Job Club. Could you explain what that’s about and how it helps job seekers?

Job Club is a support group for any job seeker in the valley (preferably those with a college degree)—not just University of Utah alumni, which make up the majority, but also alums from other Utah schools such as BYU and Utah State, and some from out of state. Job Club offers up-to-date, cutting-edge information about how to conduct a successful job search. Speakers are brought in to offer advice in their respective areas of expertise. Looking for a job can be a lonely, isolating process, and Job Club addresses that problem by connecting people to others in the same situation. Many within the group have generated strong supportive relationships that have helped them turn their situation around more quickly. Job Club meets every Friday afternoon in Career Services and is free.

What do you say to people who have been out of work for a while to help keep their spirits up?

Job seekers really should consider joining a support group—one such as Job Club. A supportive environment helps them understand that, in most cases, the situation is structural, not personal. It is imperative that job seekers remain positive and hold an “attitude of gratitude.” Negativity can undermine the job seeker’s efforts and state of mind, and recruiters sense that negativity in a heartbeat. Also, activity is critical to keeping those endorphins flowing, and one way of doing that is by volunteering. Donating your time to a cause that is heartfelt may bring a positive sense of self by knowing that you are giving back to the community. A side benefit is that the job seeker remains visible and has a presence in the public domain, as well as the opportunity to network.

What would you say are the most important things a job seeker can do to improve his or her chances of landing a job?

A job seeker must communicate, in stories and words, that he or she is a problem-solver. The message must be targeted, focused, and constructed for each interview. This means that job seekers must understand their unique ‘brand’—that is, where can they add value to a particular organization and how they can positively impact the employer’s bottom line. They should be aware of what is unique about their skills, abilities, and performance. Too often people fail at this. These are the kinds
of issues and concerns that Job Club addresses.

I should mention that, even if a person is not jobless, such skills are useful for anyone who wants to improve their employment situation.

For more information about the programs offered by Alumni Career Services, contact Julie Swaner at (801) 585-5036 or jswaner@sa.utah.edu or visit www.alumni.utah.edu/career.

Student Alumni Board Officers for 2009-10

The University of Utah Student Alumni Board (SAB) offers a unique opportunity for students to work together with U of U alumni in planning and participating in various campus programs and events, including Homecoming, PlazaFest, The MUSS, the Utah vs. BYU Food Drive, and the year-end “After Party” bash held in the Union Building in collaboration with ASUU. Members of the SAB are also appointed to Alumni Association committees and participate in many Alumni Association programs. L-R, McKenzie Newton (VP), Sarah Hanks (VP), Parker Ence (President), Rochelle McConkie (VP), and Kasi Goodwin (VP).

ULink: “Linking you with the U”

At ULink, you can: