Howie Garber MD’80, an emergency room physician and award-winning nature photographer, has focused his expertise and efforts outside medicine on preserving and defending the beauty of Utah’s Wasatch Mountains.

Garber has photographed the Wasatch Range for 25 years and received national and international awards for his images. His pictures have been widely published as book and magazine covers and in calendars and greeting cards.

“There are many similarities in my two professions,” he says. “As an emergency physician and as a nature photographer, you must accept that many factors are out of your control. Every day as an outdoor photographer is different and often full of surprise. Your success depends on multiple factors—weather, planning, animal behavior, and luck.” 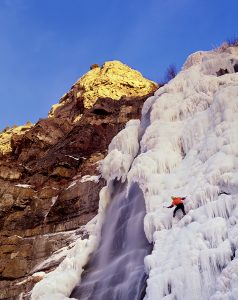 In this photo by Howie Garber, Matt Hoskisson climbs Bridal Veil Falls in the Wasatch Mountains.

His latest project is a book, Utah’s Wasatch Range: Four Season Refuge (Peter E. Randall Publisher, October 2012), that is a collaboration with 22 writers, including 17 University of Utah professors or alumni. Among the contributors are Salt Lake City Mayor Ralph Becker JD’77 MS’82; U professors Brooke Hopkins, Jim Steenburgh, and Margaret “Peggy” Battin; and professors emeritus Gale Dick, former dean of the U’s Graduate School, and William T. Parry BS’57 PhD’61 of the Geology and Geophysics Department. Each contributed essays for the book that accompany nearly 160 photographs by Garber. The photos feature the area’s wildlife, alpine scenery, and people— including skiers, hikers, and children.

“There wasn’t a single person who turned me down, and it really didn’t take much convincing,” says Garber, who adds that what makes him most proud about the book was the opportunity to collaborate with the writers. “It just shows how much people love the Wasatch Mountains.”

Photographer and author Stephen Trimble, who contributed one of the essays, says the photos and essays “work together to celebrate the diversity and fragility of one small mountain range that does so much for so many.”

Garber says the book sprang from his wish to preserve the remaining natural areas and watershed of the Wasatch Mountains. Proceeds from the book, which is available for purchase through utahswasatchrange.com, will benefit groups working on clean air, wilderness, and protection of natural areas in the Wasatch. Garber’s involvement in Utah conservation efforts started after the City Creek flood of May 1983. Garber met regularly with city planners and helped establish the current system for biking and pedestrian use of the city’s surrounding canyons. In 1987, Salt Lake County started a master plan, incorporating bike and pedestrian use, for Emigration, Mill Creek, Parley’s, and Big and Little Cottonwood canyons.

Garber worked for the next two years with Salt Lake County planners, as well as Becker, who was a consultant at the time, and a citizen’s advisory committee, on the master plan adopted by Salt Lake County. In 2009 and 2010, Garber worked with Envision Utah on the Wasatch Canyons Tomorrow plan. Since 2008, he has worked with Utah Physicians for Healthy Environment to improve Salt Lake City’s air quality. 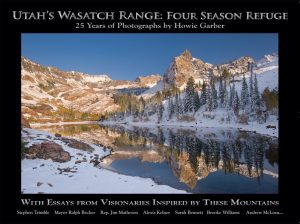 Howie Garber’s new book of photographs also features essays by 22 writers, including 17 U professors or alumni.

Garber, who was born and raised in Boston, says he is constantly trying to balance his three loves: medicine, photography, and conservation. He began working as an emergency room physician in 1982 after graduating in medicine from the U. His career path soon took him to Nepal and Brazil, where he met Sandra Cavalcanti, who was hitchhiking. Cavalcanti, to whom he was later married for a time, is a biologist specializing in jaguars and sparked his interest in wildlife photography.

Garber most recently has worked as a doctor at a hospital in Rawlins, Wyoming, and has filled in for doctors at hospitals across the West and Alaska. “I still really enjoy practicing emergency medicine,” he says. “I never really worked full time as an ER doctor, because I always wanted to have time to do other things. I could easily work full time as a photographer, but I don’t think it would pay the bills.”

So he strives to do both—two completely different professions that have taught him many of the same life lessons. “Every day is totally different and unexpected,” he says. “There’s an inability to predict what will happen, and surprises. And I guess I’m the kind of person who really likes that. I don’t think I’m the kind of person who could work a job that was the same thing every day.”

Garber’s photo clients have included Newsweek and National Geographic, as well as Nikon, Patagonia, Anheuser-Busch, and Greenpeace. In 1997, he won the Wild Places (landscape) category of the BBC Wildlife Photographer of the Year contest. During the summer of 2000, his work was featured in Nikon World, which highlights the best of photography from around the world. In 2004, he won the Animals in their Environment category of the BBC contest. His work has been exhibited at the Smithsonian Institution and the Museum of Natural History in London.

As for his new book, he says, “I hope to give people a greater appreciation for what we have in our backyards. Not only is the Wasatch an incredible place, but it’s so close to so many people.”

A.U. “Dan” Daniels BS’61 PhD’66 has been named an international Fellow of Biomaterials Science and Engineering by the International Union of Societies for Biomaterials Science and Engineering. The main focus of this field is research and development for materials used to create surgical implants and other medical devices. The union includes the biomaterials societies of the United States, Europe, Canada, Australia, Japan, China, and Korea. Daniels was a tenured professor at the University of Utah in the colleges of Medicine and Engineering. In 2003, he became a professor of experimental surgery with the University of Basel Faculty of Medicine, in Switzerland, and is now a professor emeritus there.

Robert B. Smith PhD’67 BS’72 was honored by the Geological Society of America with its George P. Woollard Award for outstanding contributions to geophysics. Smith is a University of Utah professor emeritus and research professor of geophysics and a coordinating scientist at the Yellowstone Volcano Observatory run jointly by the U.S. Geological Survey, the U, and the U.S. National Park Service. He is recognized as a leading expert on earthquakes and volcanism in the Yellowstone-Grand Teton National Park region and for operating seismic and Global Positioning System networks that record quakes and ground deformation in the region. Last fall, Smith was honored with the 2011 John Wesley Powell Award from the Geological Survey.

Jim Holbrook JD’74, clinical professor of law at the University of Utah S.J. Quinney College of Law, was honored with the 2012 Alumni Award from Grinnell College for his “extraordinary contributions of service” to his profession and community. Holbrook graduated in 1966 from Grinnell in philosophy before going on to a master’s degree in history and philosophy from Indiana University. In 1969, he served for a year in Vietnam with the U.S. Army, receiving a Bronze Star and Army Commendation Medal for Valor. After graduating from the U’s College of Law, he spent more than 25 years as a mediator and attorney, including two years with the U.S. Attorney’s Office in Salt Lake City. He began teaching alternative dispute resolution classes at the U in 1990, becoming a full-time professor in 2002. He published a book on advanced negotiating skills in 2011.

Erin R. Fox BA’94 DPH’99, director of the University of Utah Health Care’s Drug Information Service and an associate professor in the Department of Pharmacotherapy, has been honored by the American Society of Health-System Pharmacists (ASHP) with its 2012 Award of Excellence. Fox was recognized for bringing the issue of drug shortages to the attention of legislators and the public, helping the ASHP Drug Shortages Resource Center keep up with drugs in short supply, and finding alternative solutions. ASHP is a professional organization whose nearly 40,000 members include pharmacists and pharmacy technicians nationwide.

Paul C. Burke JD’97 was recognized by the Utah State Bar as the 2012 Pro Bono Lawyer of the Year. The award is one of the State Bar’s top honors. Burke, a partner and general counsel of Ray Quinney & Nebeker, was honored for his significant pro bono work during the preceding year, particularly his representation of an abused teenager in a complicated child welfare case, which included district court proceedings, two appeals, and an appellate mediation. Burke also served in 2011 as a mentor for a first-year lawyer through the Utah Supreme Court’s mentoring program, as chair of the Rules Committee for the United States Soccer Federation, and as a member of the Utah Supreme Court’s Advisory Committee on the Rules of Appellate Procedure. LM

Miriah Meyer PhD’08, a computer scientist at the University of Utah, was selected as one of seven Microsoft Research Faculty Fellows for 2012. The award recognizes innovative, promising new faculty members from research institutions around the world for their advancements in computing research. Meyer is a USTAR (Utah Science Technology and Research) assistant professor in the U’s School of Computing and Scientific Computing and Imaging Institute. Her computer research focuses on visualization systems that support complex data analysis for scientific research. Fast Company magazine placed Meyer at No. 24 on its “100 Most Creative People in Business” list for 2012 (ahead of Björk).